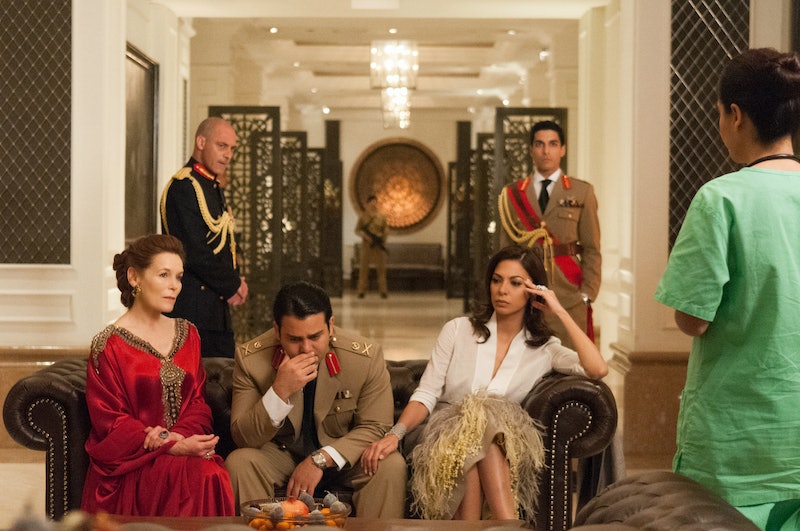 Being a TV snob is easy, because all you have to do is watch whatever's on FX. The network's next premiere is Tyrant Season 3 and you should really check out this underrated show. If you didn't get a chance to watch the second season — or simply can't quite remember all of the details, given that it aired about a year ago — I've put together a handy Tyrant Season 2 recap that will help you get totally prepared to enjoy the third season when it premieres on Wednesday, July 6 at 10 p.m. From coups to surprise assassinations (does that count as a spoiler? Well, consider this the warning that this recap includes every surprise in the season), here's everything that happened on Tyrant last year.

The first season started out a little slow, developing the country of Abuddin and the relationships between Barry and both sides of his family, but by the second season, things really started to pay off. Heading into Season 3, Tyrant has become pretty great, as all of the slow world-building made room for some major twists. Get ready, because the ruling family of Abuddin had one hell of a 2015.

At the end of Season 1, Barry/Bassam, the Americanized brother, tried to raise a coup against Jamal, the brother who is currently the titular "Tyrant." But Jamal doesn't want to execute his brother, whom he may need to put down the rebellion from Season 1.

Jamal believes he has killed him, but Barry manages to escape captivity and execution only to be stranded in the desert fending for himself, while his wife, Molly, deals with the news stateside. Jamal continues to struggle with international relations, including Abuddin's relationship with China.

Jamal's failures as a leader cause Tariq to bomb a village with sarin gas — the same village that Barry manages to take shelter with a family, while his own continues to believe he's dead.

Episode 4: "A House Built On Sand"

Barry continues to hide his identity, but begins to adapt to his new surroundings. Amira (Jamal and Barry's mother) brings Rami into the family, a veteran who also happens to be Jamal's illegitmate son. As you can imagine, Leila (Jamal's wife) and Ahmed (Jamal's son) will not be pleased with this revelation, especially when Jamal immediately takes to Rami.

Episode 5: "A Viper In The Palace"

The "Army of the Caliphate," a terrorist organization, happens to find Barry in his hiding place, giving him an inside look to exactly how dire Abuddin's politics have become. After that realization, he runs off, leaving the tribe he befriended to be forced into joining the Caliphate... until he changes his mind at the last minute. Jamal begins to doubt Tariq's qualifications after his attempt to subdue the Caliphate fails utterly.

Episode 6: "The Other Brother"

Ahmed really gets kicked around this episode. He finds out that he's his dad's second favorite son, his wife immediately takes a liking to Rami too, and then his dad kills Uncle Tariq and replaces him with Rami. Barry leads a rebellion against the Caliphate, which winds up killing the patriarch of his surrogate family.

Episode 7: "The Awful Grace Of God"

Jamal is pretty desperate for a national "win" at this point, and Rami gets a taste of what Ahmed must feel every day: his father's disappointment. It's not for long, though, because with Amira's prodding, he does find success. Ahmed and Nusrat tragically lose their unborn child, and Sammy attempts to save the life of Abdul, a fellow gay man. Meanwhile, Barry has some very inappropriate flirting with the widow of the Bedouin family.

The theme of this episode is "misunderstandings," as everyone gets their wires crossed. Bassam, Bassam, Bassam — you finally got found out, buddy, and your son is not happy. At least Jamal can stop guiltily praying every day now, and start celebrating Rami's continued military success — even though he seems to be regretting trusting a complete stranger with the fate of his country.

Episode 9: "Inside Men And Outside Women"

Jamal trades Rami for the somehow still-disguised Barry as his complete stranger/closest confidante. Sammy's mad at his dad, but pledges to join the resistance and fight against the Caliphate. With his new time off, Rami begins romancing Nusrat.

The fabulous Amira sadly dies... at least there's still Leila's amazing outfits. And the worst part is, it's yet another one of Jamal's screwups — he meant to kill Rami, for committing the crime of being a normal person. Rami very nearly gets framed for the murder, but Jamal's guilt is beginning to catch up with him.

Leila secures Rami's release, against Jamal's wishes, and then helps Molly secure military support for Barry's rebellion — which Jamal refuses to believe is led by his brother. But Leila and Ahmed, who are planning to kill Jamal, finally are able to convince him that his decision making is horrible. Barry fights off the Caliphate, then swears off violence, wanting to instead return to his former life.

Leila, Barry, and Ahmed convince Jamal to step down and plead guilty to his crimes (and some of Tariq's). Of course, this leaves Barry as the most likely president in Season 3, given that he's the face of the resistance. Nusrat, still reeling from the loss of her baby and the rape she suffered in Season 1, deals the killing blow to Jamal, ending Season 2 on a shocking cliffhanger.

With so much at stake after a tumultuous season for every member of the family, Tyrant Season 3 is bound to be the series' most intense yet.