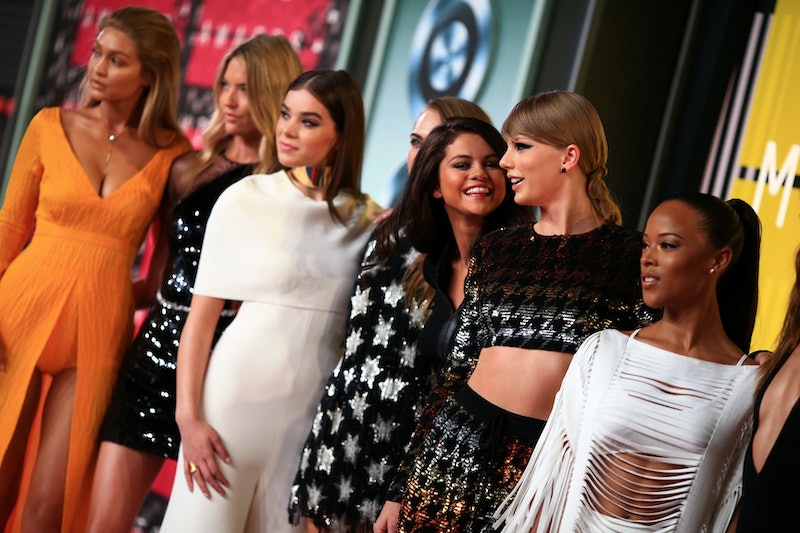 Taylor Swift had a perfect 4th of July party full of celebs and fun. And yes, Tom Hiddleston was there, too. But, despite the recent hoopla, Swift's Instagram post from her 4th of July celebration wasn't about him. Instead, she decided to focus on friendship and girl power, and it says a lot about the circulating talk about her relationship without saying anything at all. She wrote in her Instagram caption, "Happy 4th from us ❤️," insinuating that the "us" was her and her squad... no boys allowed. Well, allowed because they were there, but you know what I mean. It was a post centering around those who'll always be there, whether she ends up with the handsome British actor or not.

Listen, it's fun to speculate. I do it, too. And I also admittedly bring up Hiddleswift in my BFF group text on the daily. How can you not, you know? It's so intriguing! The point is, I am not judging about the general public's obsession over this. All I'm saying is, this particular photo is a breath of fresh air from all of the relationship hype. And I think it may have been a deliberate move on the 1989 singer's part to redirect the attention back on her squad. And you know what? I am totally down with that move, be it strategic or not. Besides, who doesn't want to see a super cute group photo including the likes of Uzo Aduba, Ruby Rose, Gigi Hadid, Cara Delevingne, Rachel Platten, and Blake Lively?

As a fan, seeing Swift having all of her girls together, in matching American flag onesies, hoodies, and crop tops, looking ecstatic about life, with a magnificent firework show in the background, is the best. That's better than any relationship paparazzi shot to me... despite how juicy celeb gossip may be at times. I think it's nice to see T. Swift just kick it back through her own lens every once in a while.