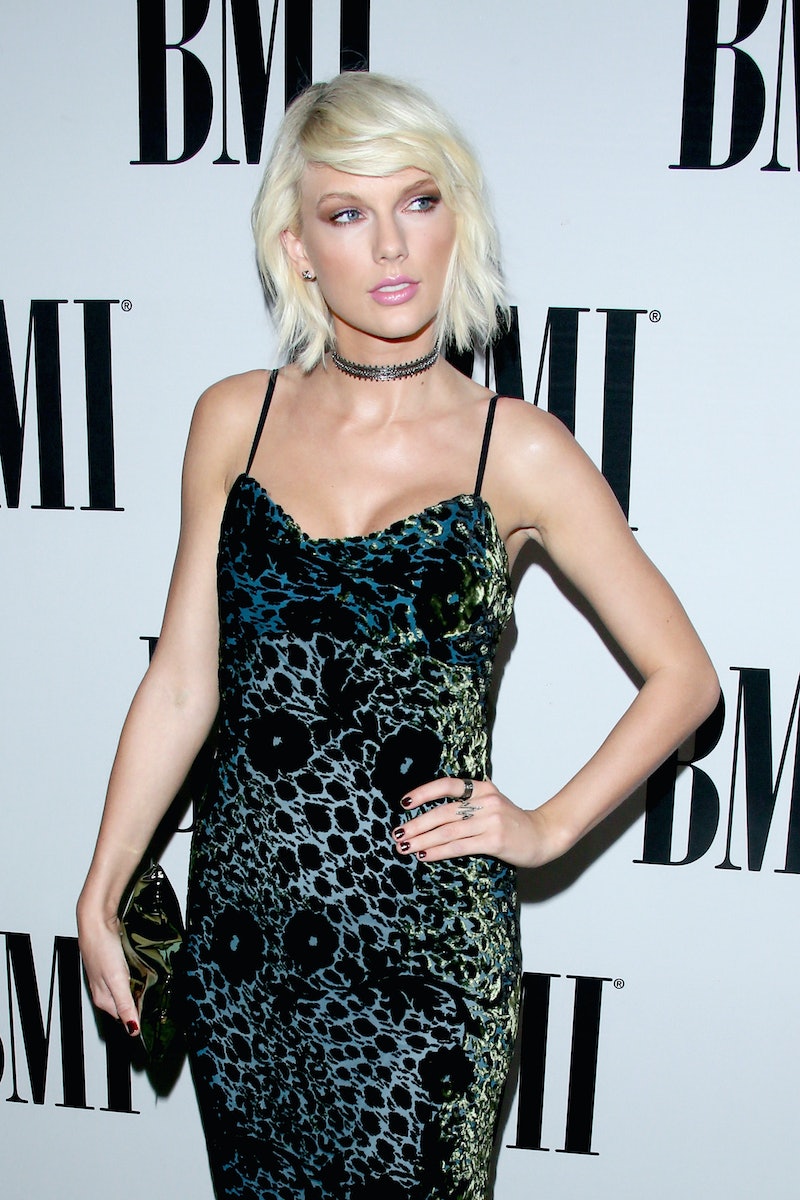 To know Taylor Swift is to know that her 4th of July parties are more lit than sparklers. Without question, T. Swift knows how to celebrate a holiday — and Swift's 2016 4th of July party may be her best summer bash ever. It's a hard feat to accomplish, to be sure (especially when her past parties for the Fourth seem to involve ever celebrity ever and lots and lots of matching patriotic gear), but this one seems to have topped them all. Seriously: It involves boyfriend Tom Hiddleston donning a Swift-themed temporary tattoo and a T-shirt declaring his love for her. It also involves a pregnant Blake Lively, the #Squad (duh), and a giant, red, white, and blue waterslide with "TAYMERICA" painted on the side, according to People. Amazing.

Let's break it down: Why is this party the best of them all? For starters, it started on Sunday and continued on the actual holiday, and what is better than a party stretched out for the whole holiday weekend? It also features an epic assortment of stars and important people in Swift's life. While her past parties have included her dancers and tons of celebs, this one is more of an eclectic group: There's T. Swift of course, and mainstays like Gigi Hadid, Karlie Kloss, and Este Haim. But also present at the beach bash (which was held at her Rhode Island estate) are Blake Lively, who is pregnant with her second child with Ryan Reynolds, Ruby Rose, and Swift's longtime bestie Abigail Anderson. Not to mention, of course, that #Hiddleswift was in attendance, kissing and embracing in the water — and the actor-half of the pairing was wearing his heart on his sleeve, quite literally.

While this entire group partied it up in the ocean on Sunday, Monday was the real affair in Swift's backyard. According to a People source, the ol' gang played football on the lawn and blasted some jams (like "Hips Don't Lie" by Shakira, although Swift's own "Sparks Fly" would've probably been more fitting for the occasion). The site reports that Hiddleston rocked a "red, white, and blue jumpsuit" and was doing flips on the waterslide with the singer's brother, Austin. (Parent and brother approved? Good for you, Hiddleston.) He and Swift also reportedly held hands while going down the giant inflatable slide together. And you know what they say — the couple who waterslides together, stays together.

I don't know how it's possible, but somehow T. Swift's 4th of July parties seem to get better and better every year. While last year's bash involved Ed Sheeran hilariously dressed in a British red coat and included inflatable pool floats, this year's party really takes the cake. With a random assortment of stars — only Swift could bring together everyone from Gigi Hadid to Tom Hiddleston to Ruby Rose to Blake Lively to her childhood best friend — and a rumor-fueling new romance (complete with her beau declaring his love for her on his clothing), Swift's 2016 4th of July party is certainly the best so far. One can only wonder what next year will bring...