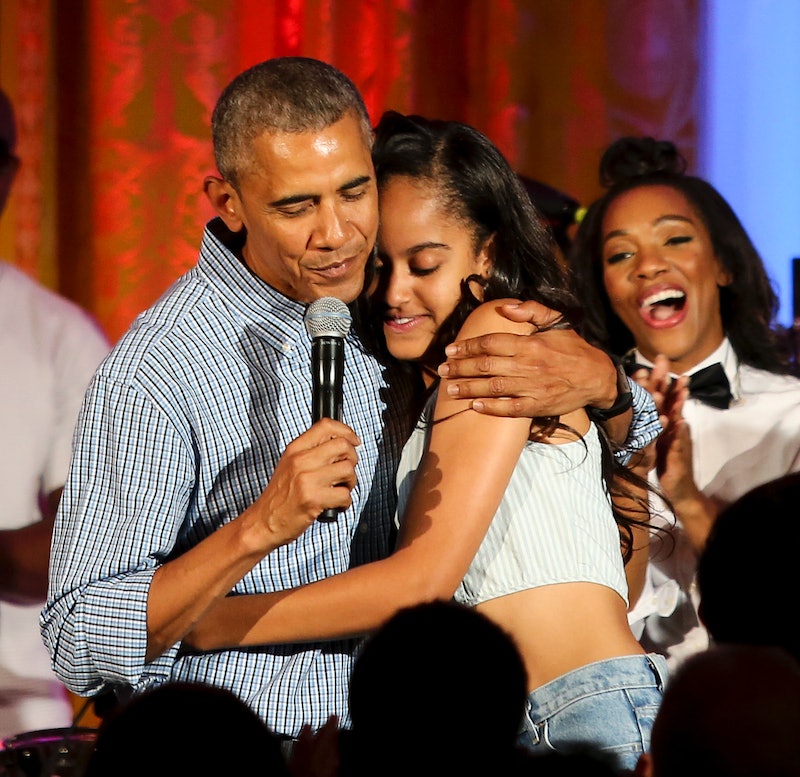 President Obama would do anything for his daughters, including sing "Happy Birthday" in front of a few million people. This year's White House Fourth of July party served as a dual celebration for the United States' independence and Malia Obama's 18th birthday, marking her entrance into adulthood (good luck, kid!) and her last birthday at the White House. In honor of the occasion, President Obama battled a scratchy throat to serenade his oldest with a verse of "Happy Birthday," and it's pretty much the cutest thing ever.

The night started off the way any normal 18th birthday party starts, with performances by Kendrick Lamar and Janelle Monáe. Lamar performed some of his top hits including "Swimming Pools, "Bitch, Don't Kill My Vibe" and "Alright," before Monáe came on to crush a cover of Prince's "Let's Go Crazy."

Then, President Obama took to the stage to thank the singers before surprising the audience with a song of his own. "Just because it's the job of a father to embarrass his daughters, I've got one last job," President Obama said as he took the stage. "It just so happens that we celebrate our country's birthday on the same day that we celebrate my oldest daughter's birthday. So just a quick happy birthday for Malia," the president concluded before launching into song. Malia may have been embarrassed, but she definitely didn't show it. The First Daughter jumped on stage to give her dad a big hug as he finished her birthday tune, showing just how close their bond really is.

This is far from the first cute daddy-daughter moment in the Obama family, but it's a reminder of how much fun it is to have kids in the White House. The world has watched Malia and younger sister Sasha grow up over the last eight years with their dad perpetually at their side, because even the leader of the free world has to have time for his girls. Through these moments, the American people have gotten to know President Obama as a family man, a welcome contrast to the diamond facade of the presidency. President Obama will be remembered as one of the best loved presidents ever, partly thanks to Malia and Sasha.

If Obama is still exploring post-presidency career options, he can definitely add pop star to the list.

The president may have had a slightly compromised voice, but anyone can tell he's got singing chops. Even if he decides to go a different career route, there will be many choruses of "Happy Birthday" in the future. Happy birthday, Malia!