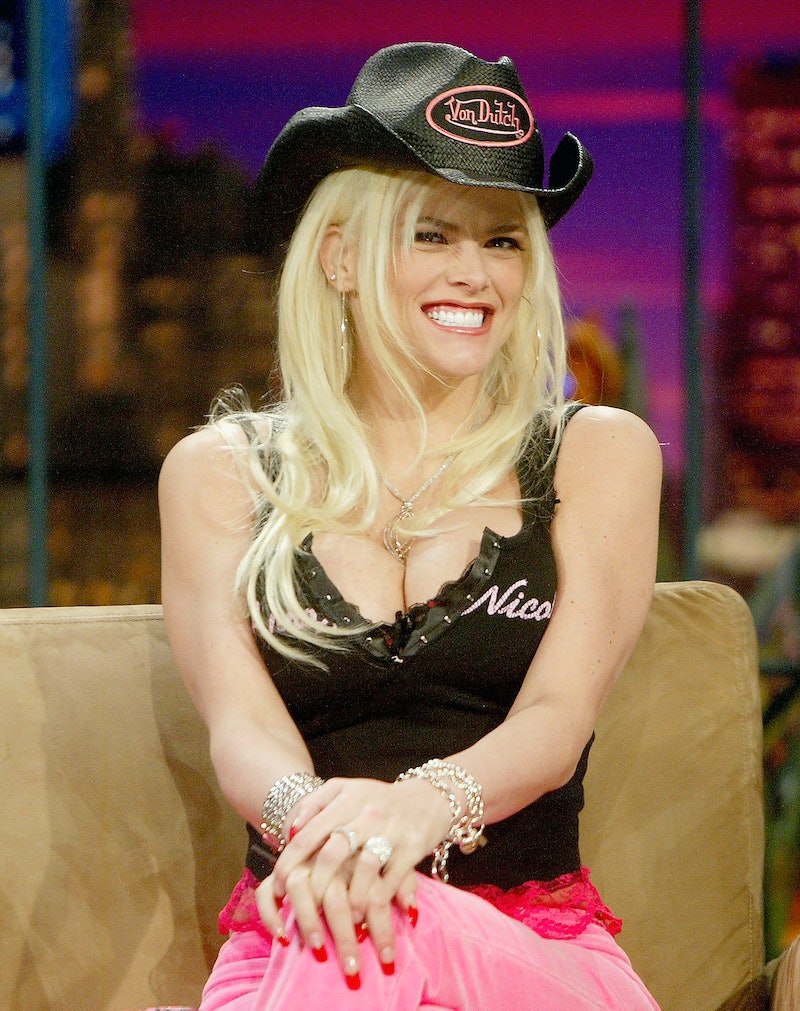 The fashion world is currently experiencing something of an early millennium revival, so the brands we loved back when The Simple Life and MTV Cribs were first airing on our televisions are finally getting a new life. What better time to celebrate celebrities wearing Von Dutch in the early 2000s?

In Apr. 2016, Instagram showed us pouty princess Kylie Jenner wearing a Von Dutch trucker cap, and I truly believe that was the catalyst for the serious style nostalgia going down at the moment. Sisters Kim and Kourtney Kardashian were no strangers to the look back when it was popular, so I wouldn't be surprised if Jenner dusted it off after finding the cap in the back of one of her siblings' many wardrobes.

According to Jennifer Grayer Moore's Fashion Fads Through American History: Fitting Clothes Into Context, the legendary man behind the label, Kenneth Howard, was known as the "godfather of modern day pin-striping" and was a blue collar hero for fashionistas who were willing to pay upwards of $40 for their own trucker cap. Ironically, these hats that represented a working class aesthetic were being sold in high fashion boutiques across the world.

So here are nine of the Von Dutch celebrity pioneers from the early '00s: The original trendsetters who shaped the iconic look in the first place. If this list won't convince you that trucker caps and obviously-branded-clothing are cool, then nothing will.

Here's a fabulous picture of the late Anna Nicole Smith wearing head-to-toe Von Dutch straight from her collaborative line with the brand back in 2004. She premiered this Western-inspired look on her slot on The Tonight Show with Jay Leno in the same year.

The Hilton sisters were no strangers to passing fads. Here, Nicky was wearing her own white trucker cap, while Paris was often spotted rocking some great Von Dutch numbers alongside co-star Nicole Richie back in The Simple Life days.

Queen Gwen Stefani has always been a massive style icon, so obviously she isn't against jumping onto the odd fashion bandwagon now and then. Here we see the singer rocking a navy blue and white striped trucker.

It's not all about the hats, you know. Back in 2005, actor Halle Berry walked the red carpet in a matching three-quarter sleeved Von Dutch T-shirt paired with jeans and sunnies. A very cool and casual look, indeed.

This was a simple outfit made great with the use of statement accessories and rocked by Jay Z back in 2003. Denim truckers are a particularly great version of the classic hat, and my personal favorites.

Actor Meagan Good was a pretty big Von Dutch fan, and was seen wearing the brand on multiple occasions. I'm particularly loving this look, for which she ensured that the color of her hat perfectly matched the rest of her outfit.

Actor Tara Reid — who you will definitely recognize from her work in films such as The Big Lebowski and American Pie — was often spotted rocking Von Dutch in the early '00s. Here she was minding her own business while looking cool in the sunshine.

J.T. was another Von Dutch-loving celeb, and here we can see him enjoying a game in a lovely denim number. He adored trucker hats so much that he sold some camouflage patterned truckers as part of the Justin Timberlake concert tour merchandise around the same time that this photo was taken.

Ever the hat lover, Dennis Rodman showed up to the Von Dutch party on his 43rd birthday wearing the brand in full force. Not only was he sporting a red trucker with a unique double logo, but he had on a branded camo print jacket to match. If there's a single outfit to sum up menswear the early '00s, it might just be this one.

Love it or hate it, Von Dutch seems to be creeping back into our lives, but will the trend stick around? Personally, I was never much of a fan of the trucker cap back in its heyday, but after perusing the internet for images of celebs rocking the look, I've definitely been swayed. If anyone has a spare lying around, let's be best friends.