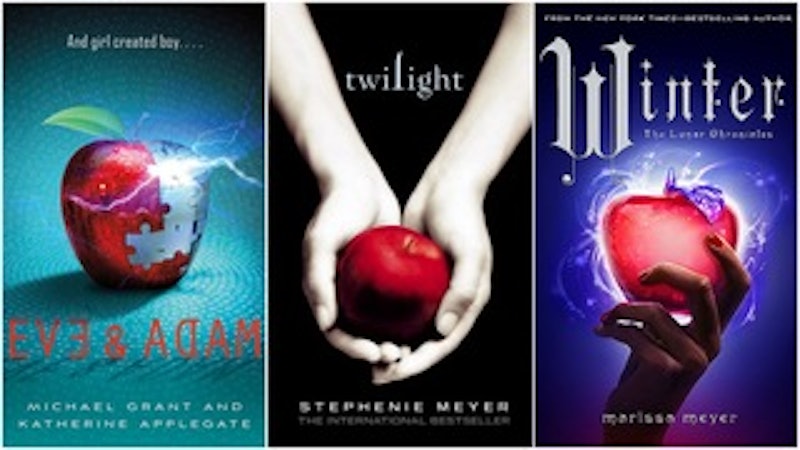 I know that the old excuse, "I don't know the title, but it was blue," is meant to be a joke, but let's face it: there are an awful lot of books with similar covers these days. Whether it's a case of two titles using the same stock photo, or just a striking similarity in design, it can be very unnerving to keep track of all these book clones.

I've tried to keep the books on this list fairly current and prominent, simply because I don't want to pull out a bunch of old supernatural romance novels and dated paperbacks to make my point. Trust me, I found plenty of material to work with.

A lot of the groups below will make you think twice about your book cover-remembering tactics. We all know that saying, "It's blue!" is vague, but what about saying "It has poppies on the cover"? Sure, that narrows down the list, but you've still left your reading advisor with more than a few choices.

And, yes, a lot of the similarities between these book covers could be chalked up to industry and design trends of the present. Don't be surprised if you find yourself trying to catalog all those book cover trends after reading through this list, however.

For now, let's take a look at how deep the rabbit hole goes.

Once you've been spotted by the giant shades of Maria Semple's protagonist, it's hard to resist snatching a copy of Where'd You Go, Bernadette off the shelf. Here, that cover is joined by those of two similar titles — Finding Audrey by Sophie Kinsella and Vinegar Girl by Anne Tyler — but see if you can find a few more.

Eyes must be a thing this year. I found too many, and even debated having a second heading for them. Here we have Your Heart Is a Muscle the Size of a Fist by Sunil Yapa, Nobody's Son by Mark Slouka, and The Queue by Basma Abdel Aziz, but you should also look for We, Robots by Curtis White and The Grownup by Gillian Flynn.

3. All the Blue Stripes

Stripes are in, and geographical stripes are very in. This Is Your Life, Harriet Chance ! by Jonathan Evison, History of the Rain by Niall Williams, and The High Mountains of Portugal by Yann Martel are just the tip of this iceberg.

At what point did the graphic designers of the publishing world collectively decide to brush pen titles onto somewhat obscure, sepia-toned images, and call it a day? The trend is pretty effective, however. I want to read all three of these books: The Gates of Evangeline by Hester Young, In the Country by Mia Alvar, and Sons and Daughters of Ease and Plenty by Ramona Ausubel.

Like the aforementioned Brush Pen Mania, pairing script fonts with tiny, stylized people looks like the next big thing in romance novels. It all started with Us by David Nicholls in 2014, but 2016 already has two prominent adherents: Modern Lovers by Emma Straub and Break in Case of Emergency by Jessica Winter.

I hate to generalize, but nonfiction as a genre isn't exactly known for having thrilling cover designs. But more forgetful readers might find their descriptions of "divided" covers fall short. The new trend — as shown here with Being Mortal by Atul Gawande, Thinking, Fast and Slow by Daniel Kahneman, and How to Write Short by Roy Peter Clark — is to separate title and author with a horizontal slash across the page.

Do you remember Lois Lenski's Strawberry Girl? That's the aesthetic these titles are going for. Pioneer Girl by Bich Minh Nguyen, Invincible Summer by Alice Adams, and Yuki Chan in Brontë Country by Mick Jackson call to mind a simpler time, when books were bound in cloth and didn't come equipped with ISBNs.

"I'm looking for that book... um... It's a white cover with black and pink writing?"

"Can you be more specific?"

You'll have to do better than that if you want to distinguish between Bad Feminist by Roxane Gay, Not That Kind of Girl by Lena Dunham, and Barbara the Slut and Other People by Lauren Holmes.

When in doubt, scribble it out. Ever since I saw the cover of Greg McKeown's Essentialism , I've been kind of in love with scribbly cover art. My Heart and Other Black Holes by Jasmine Warga is great, but Still Life with Tornado by A.S. King might top McKeown as my new fave.

You wouldn't be wrong for thinking Crazy Rich Asians by Kevin Kwan kind of, sort of looks like Where'd You Go, Bernadette? above, but it's much more exemplary of the Ladies in Profile book cover trend. See also: A Wife of Noble Character by Yvonne Georgina Puig and I'll Have What She's Having by Rebecca Harrington.

Ah, Twilight . Those iconic black, white, and red photographs — illustrations? — started a book cover trend like no other. That color scheme might have dwindled, but apples are still yuuuuuuge for YA titles. Just look at Winter by Marissa Meyer and Eve & Adam by Michael Grant and Katherine Applegate, shown with Stephenie Meyer's breakout novel above.

"Hey, you know what would be cool? If birds just flew right across the sun."

The above is how I imagine the cover design talks went for A Brief History of Seven Killings by Marlon James, Stone Mattress by Margaret Atwood, and The Seven Good Years by Etgar Keret.

You'd think that remembering a book cover full of leaves would be enough to help you find it again, but no, not today, pal. Puffin in Bloom's fanciful cover of Louisa May Alcott's Little Women is just the beginning. Check out Wreck and Order by Hannah Tennant-Moore and Enchanted Islands by Allison Amend for more ferny, frondy goodness.

There's just something about scrollwork that has all the book cover designers inspired. The Nest by Cynthia D'Aprix Sweeney is the latest release in a lineup that includes We Could Be Beautiful by Swan Huntley and The Little Paris Bookshop by Nina George.

15. A Banner Year for Books

All joking aside, I'm seriously in love with this batch of covers. Lisa Lutz's How to Start a Fire has the most inventive use of a banner, while The Versions of Us by Laura Barnett sports some eye-catching colors and patterns. Then there's Matthew Diffee's Hand Drawn Jokes for Smart Attractive People , which hits all the Gorey-esque notes I love.

Designers know that getting your eye to flow through a piece is what makes their art really work, and I can't think of a better way to do that than by laying out a networked path across the cover Check out Underground Railroad by Colson Whitehead, The Ghost Network by Catie Disabato, and Book of Numbers by Joshua Cohen to see what I mean.

Whether you've been publicly shamed or not, obscuring your face is a great way to generate interest in the book you're promoting. Invisible Monsters by Chuck Palahniuk is a prominent example, and So You've Been Publicly Shamed by John Ronson took things a step further with two paint marks. Among the Wild Mulattos by Tom Williams opted for a blindfold instead of a bright pink statement, but it bears a striking resemblance, nonetheless.

I'm not sure why we're suddenly so obsessed with putting depictions of the universe on our book covers, but we are. Girl in the Dark by Anna Lyndsey and Binary Star by Sarah Gerard are prominent examples, while Black Hole Blues and Other Songs from Outer Space by Janna Levin adds another layer by giving its cover the celestial vinyl treatment.

"Poppies! Poppies will make them sleep!"

These flowers are a bit less ominous than the ones the Wicked Witch of the West grew, but they're just as lovely and prevalent. Check out The Girl from the Garden by Parnaz Foroutan, Mischling by Affinity Konar, and About the Night by Anat Talshir for your next flower fix.