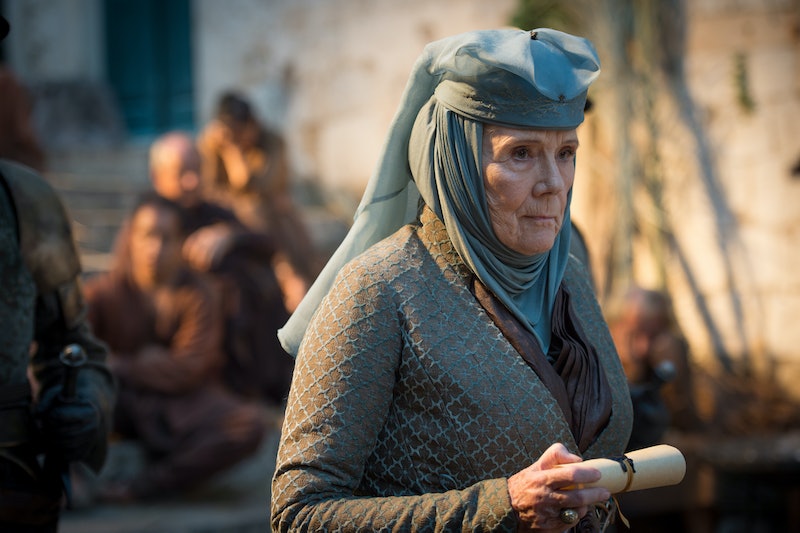 It is a great thing to be gifted with a quick wit, but unfortunately, not everyone can be as swift with a sharp tongue as Game of Thrones' Olenna Tyrell or Tyrion Lannister. Luckily, though, no one is stopping you from using GoT quotes in real life. The language of Game of Thrones may be more suited to television than the real world, as it carries a certain weight with every word void of contemporary pitfalls like relying on "like" and "uh" to pad out sentences, but it can still be used in daily life. For those who wish to sound a little more regal in their everyday conversations, it may seem like a good idea to borrow a quote from Game of Thrones and co-opt it for real life. Yet while it's certainly a nice idea in theory, how does it work in real life?

Well, I decided to find out. Film and television quotes have long helped people connect in conversation, with humor and references marking common ground. However, for every good friend you can trade Parks and Recreation quotes with, there's always someone who relies a little too much on pop culture references to get through their day. I decided to become that person by testing out a few Game of Thrones quotes in real life. Here's what happened.

Originally Said By: Attributed to Ned Stark, often considered a Stark house mottoWho This Was Said To IRL: Uber driverContext Of Quote: They brought up the weatherReaction: "Ha ha, Game of Thrones, huh?"

My first quote-drop of this experiment was ill-advised at best. As I sat in the backseat of an UberX, my conversation with my driver had turned to the weather. I saw this as my first clear shot to drop a GoT quote. There were two key problems here:

The Uber driver saw through my ruse with no effort, and in a moment of panic, I pretended to not know what Game of Thrones was. This seemed to surprise the driver, who said I should "check it out" and "watch out for spoilers." Thankfully, he never followed up on why someone who was almost completely unfamiliar with Game of Thrones would say the phrase "winter is coming" in the middle of summer, but I chalk that up to being dropped off at my destination.

2. "It’s Not Easy Being Drunk All The Time. Everyone Would Do It If It Were Easy."

Originally Said By: Tyrion LannisterWho This Was Said To IRL: Group of friendsContext Of Quote: A night of drinkingReaction: Laughter

To form a better approach to this experiment, after my Uber ride, I took some time to look up some Game of Thrones quotes that could actually fit in real life, write them down in my carry-with-me-always Moleskin journal, and use it as a resource for what to say in certain situations. While enjoying my evening surrounded by some friends and enjoying some summer-appropriate shandys, I decided to try out one of Tyrion Lannister's famous lines. My announcement — "It’s not easy being drunk all the time. Everyone would do it if it were easy" — was met with laughter, clinked bottles, and more drinking. Clearly, this approach was working.

Originally Said By: Jamie LannisterWho This Was Said To IRL: RoommateContext Of Quote: I bought them Chinese foodReaction: Ignored

There is no greater millennial tradition than staying in for a night of marathoning reality television over a feast of delivered Chinese food. When my roommate thanked me for getting the food, I decided to drop Jamie's famous "The things I do for love" line, which for a split second made me fear my roommate would take it the wrong way, but they were too invested in MasterChef Junior to notice that I had said anything at all.

Originally Said By: Sandor "The Hound" CleganeWho This Was Said To: Fellow partygoersContext Of Quote: Someone brought fried chickenReaction: Bafflement

As this experiment took place over a holiday weekend, I had been keeping this quote in my back pocket knowing that surely, someone was going to bring fried chicken to a barbecue. I was right, but this quote managed to upset the tone of the party and raise confusion. "What?", "Huh?", and "Why do you have to eat all the chickens?" were all responses I had not prepared for. I ended up caving and saying "like in Game of Thrones. The Hound?" and one person thought it was funny after I explained it was a quote.

Originally Said By: Olenna "Queen Of Thrones" TyrellWho This Was Said To: My sisterContext Of Quote: She ate a cookie that I said was mineReaction: "Hey! That's not nice!"

There was no way I was going to get through my experiment without trying a quote by the Queen of Thorns herself, but the difference between me and Olenna Tyrell is that no one has truly upset or offended me to the degree that Olenna is constantly annoyed or irritated. Olenna has barbs for everyone, and the only use I had for such language was to use it ironically. However, my younger sister taking the last of the home-baked cookies was certainly cause for such harsh words, even if the severity of the phrase was called out immediately. Then again, she did get the last cookie ,so we were even.

6. "If You Think This Has A Happy Ending, You Haven't Been Paying Attention."

Originally Said By: Ramsay BoltonWho This Was Said To: An opponent during a board gameContext Of Quote: Playing a game of "Risk!"Reaction: Angry glare

Game of Thrones is a story of war, and as such, the best time to deploy quotes from it are during activities modeled after war. During a game of the board game Risk I played with some friends, quotes from the show came in handy when I tried to really get into character. It turns out fictional quotes have the most power in a fictional setting.

There were plenty of other quotes I used over the course of my experiment, but many of them were met with either confusion as to why I was speaking differently that usual, instant recognition that I was quoting Game of Thrones, or belief that what I was saying was so innocuous that the fact that they were quotes really didn't really register at all (all the times I said "Hold The Door" resulted in people, well, holding the door). There were many instances in my experiment where a quote naturally fit into the conversation and got a laugh, or allowed others to recognize me as a GoT fan, which led to more discussion. But the times where I forced a quote in felt awkward and stunted, and just didn't really work.

If I've learned anything from this experiment, it's to rely on being myself in conversations, and not expect the words of George R. R. Martin to make me seem more verbose than I actually am. Just be yourself, because it's probably a lot less awkward than trying to pretend you're a Game of Thrones character who just happens to be at a barbecue.