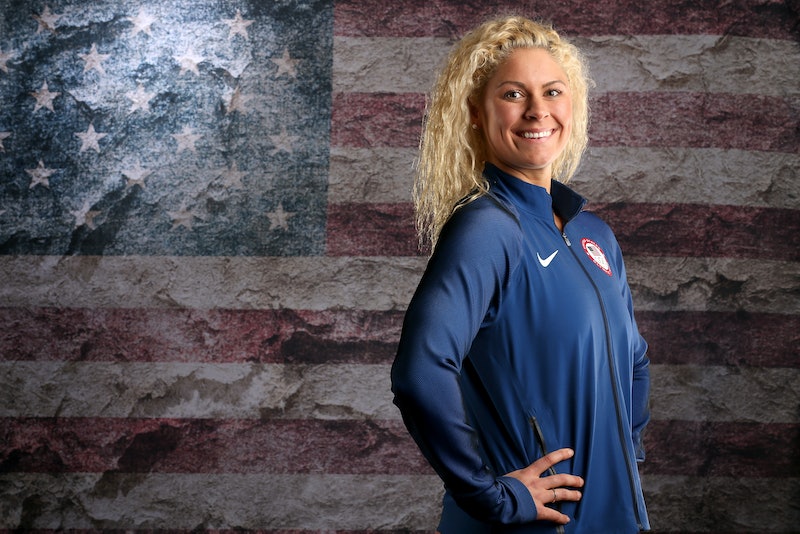 Over the past eight years, the national Olympic swim team has become a second family to 23-year-old Elizabeth Beisel, who recently qualified for her third Olympics. From being the youngest competitor on the team to fulfilling the role of indispensable team leader, the Rhode Island native has seen it all. Although watching the Olympic races can be a nail-biting experience for audiences, participating in the career-defining games is, surprisingly, all about having fun, Beisel says.

Beisel has been setting the bar high since she joined the U.S. national swim team at just 13 years old. Two years later, she found herself on the Olympic swim team, practicing alongside big names like Michael Phelps and Natalie Coughlin. The age gap between Beisel and her team members, who were in their 20s, sounds daunting, but it ultimately facilitated something that would become priceless in Beisel's evolution as an athlete: mentorship. Older members of the team weren't always allowed that privilege, she explains to Bustle.

"You don't really have friends, but you have people that look out for you, and I was fortunate enough to have almost the entire team treat me as their little sister," Beisel says. "They sort of showed me the ropes and taught me what I needed to know to be successful at an elite level."

Coughlin — the 12-time Olympic medalist Beisel had grown up watching on television — was one of her biggest role models. She recalls how a handwritten card from Coughlin made her 14th birthday magical during what would have otherwise been a normal swim meet. Nearly 10 years later, Beisel finds herself fulfilling that same supportive role for young team members; she was even elected team captain in 2015. And now, Beisel and Coughlin, who are both sponsored by Speedo, are great friends.

Being on the Olympic team is serious business, but according to Beisel, taking yourself too seriously can be detrimental to your performance. In that sense, fostering friendships with fellow teammates is absolutely vital to keeping the atmosphere lighthearted and positive. For example, Beisel insists that her greatest record-breaking race was also the most fun.

In the 2012 London Olympics, she set two personal records and received both a bronze and silver medal. No one could have guessed how Beisel and fellow teammate and best friend Allison Schmitt prepared for the best races of their lives.

"We played Rihanna's 'Cheers' and we would literally dance around right before our race in the ready room," she explains. "We just have to be having fun and being light and having a great time before our race, and I think that's when we both swim our best."

As simple as that ritual sounds, it took years for Beisel to trust herself enough to pursue a unique path and quit comparing her routines to those of older athletes, such as Phelps or Coughlin. In particular, Olympic athletes face intensified pressure because those international games are only held once every four years. And, that being said, athletic careers rarely last a lifetime. Beisel, for example, has yet to break the record she set for herself four years ago in London and that kind of frustration can be difficult to shake. Still, the Olympic swim team describes her as one of its most "bubbly" members and after chatting with her, it's not difficult to understand why. She chooses to be happy.

"I realize that swimming isn't a rest-of-my-life career, and I sort of wanted to do it the way I wanted to do it," Beisel says. "And that's going to be me having fun with it, and me being happy, and me choosing to enjoy what I do because otherwise, if you just go through the motions, you're going to be miserable."

The positive attitude she described to Bustle a week before heading out to the Olympic Games is clearly working. At the trials in Omaha, Nebraska, in July, Beisel qualified for the 400 IM race. This time, she's hoping that her strategy will help her score a gold medal in Rio.

"If I can do it when I'm 15 and 19, I better be able to do it when I'm 23," Beisel insists of qualifying for her third Olympic Games. "I want to beat who's next to me, but at the end of the day, it really is about personal improvement and making yourself a better swimmer and a better person."

And, of course, having fun.

To learn more about all Olympic hopefuls, visit teamusa.org. The Rio Olympics begin on August 5.