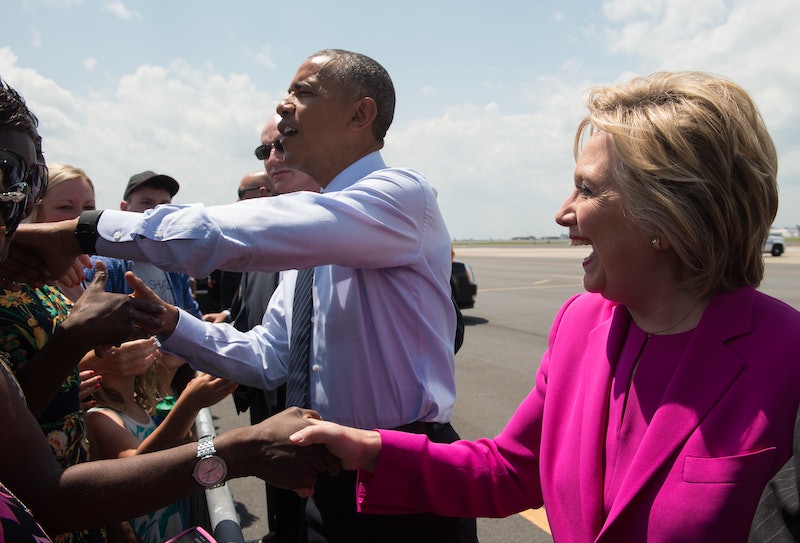 Before a cheering crowd at the Charlotte Convention Center in North Carolina on Tuesday, Barack Obama took the stage for Hillary Clinton. And he showed that, unlike fruitcake and personalized T-shirts, some things can be re-gifted with grace. In 2008, Obama won the hearts of thousands of voters with "Fired up! Ready to go!" It's a phrase with a touching story which starts on a rainy day in Greenwood, South Carolina, early in Obama's 2008 campaign. A woman named Edith S. Childs yelled from a crowd of about 20 people, "Fired up!" and then "Fired up! Ready to go!" The crowd created a chant, and the rest was history.

With the presumptive Democratic nominee smiling behind him, Obama once again asked the crowd, "Are you fired up?" It's not the first time Obama used the phrase in reference to Clinton. During the video announcing his endorsement of Clinton, Obama said, "I am fired up. And I cannot wait to get out there and campaign for Hillary." In his first public appearance stumping for Clinton, it really only makes sense that he would go back to his tried-and-true campaign slogan. As Bustle writer Charlie Beckerman noted, Obama is campaigning for himself and his legacy as much as he is for Clinton.

Still, Twitter was abuzz at Obama's throwback to his historic campaign for the Democratic nomination — one in which he beat Clinton in one of the hardest-fought, closest Democratic battles. This time around, though, Obama is using the slogan to help his former rival. Obama made a point of praising the way Clinton ran her campaign in 2008, noting, "She had to do everything I had to do, but she was like Ginger Rogers. She had to do it backwards in heels."