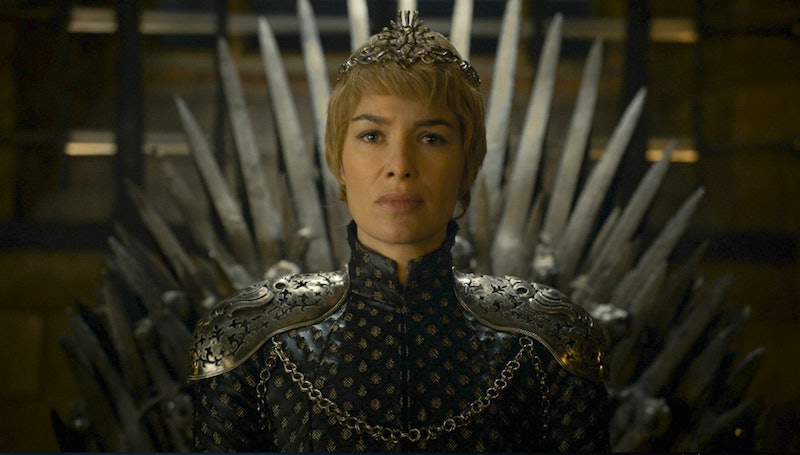 Remember when you absolutely hated Cersei so much that you wished a horrible and cruel death on her? Then, slowly but surely, you grew to realize that, yes, she is flawed and does some downright evil things, but that our girl Cersei Lannister has reasons for the things she does (no matter how odd those reasons may be). A lot has changed for Cersei since she was a part of the whole pushing-Bran-out-the-window thing in the premiere episode of Game of Thrones. Through all of the plots going on around, because, and sometimes in spite, of this Queen, it's obvious to all of us that Cersei has changed since the Game of Thrones premiere. And she has changed a lot.

Since her debut on the Home Box Office screen, we've learned a lot about Cersei. In fact, we've almost grown to understand why she does the things she does (and that is a very heavy almost). We've figured out that the fear of the future she garnered when Maggy the Frog predicted her death and the death of her children is what really drove Cersei's abominable actions (with just a slight dash of jealousy and the Westerosi version of pride going before a fall). And, though I can't hate her, I also can't love her. Instead, I simply watch as she burns the house down (literally) and attempts to rise from the ashes, Daenerys-style. She's grown so much in the meantime that I have to say that I'm rooting for her just a little bit.

1. She's A Straight Up Queen

I guess all it takes to sit on the Iron Throne is to have your husband murdered and then outlive all your children.

2. She's Lost A Lot Of People She Loved

Cersei was no stranger to loss as her mother died during the birth of her younger brother Tyrion Lannister. And I mean the medical care in Westeros isn't ideal, so she's probably no stranger to death in general. But now she's lost all three of her children and her father. Just imaging the devastation.

3. Her Hair Is Different

Sure, her head was shorn in shame and that's why she's missing those lustrous locks, but seriously she kills that pixie look.

4. She Doesn't Care If People Know Her Secrets

In the premiere, Cersei was intent on silencing Bran so he wouldn't spread the fact she and her brother were romantically linked. If people found out, her children would not be heirs to the throne. Now, she's like "bring it on, I'll kiss him when and where I want to."

Cersei never loved other people, but her kill list was definitely not as high. Now, she's out for the blood of her enemies, specifically Tyrion and Sansa, the alleged murderers of Joffrey. She already took out the Sparrows and the Tyrells, so things don't look great for either the Lannister or the Stark.

6. She Knows She's Not Perfect

She's pretty aware she created a blond-haired, blue-eyed monster of a boy king named Joffrey Baratheon. Honestly, sometimes she seemed scared of what he had become. Knowing that she was capable of creating such a psychopath definitely affected Cersei.

7. The Rest Of Her Fashion Has Changed

Back in the day, Cersei was rocking that Lannister red and gold, the flowing queenly hair styles, the modest but well-fitting gowns of a queen. Now, she's decked out in armor and leather because she is a straight up warrior queen.

8. She Has Been Forced To See The Error Of Her Ways

When the Sparrows locked Cersei in prison, threw water on her daily, and then forced her to walk naked through King's Landing all to the tune of "shame," she definitely had some time to think about herself. Unfortunately for the Sparrows, Cersei grew to be even more proud of her sins and is now wearing them as a proud badge on her sleeve while she murders all.

9. She's Single And Ready To Mingle

Cersei didn't have to marry anyone to have the highest position of power in the land. She doesn't have Robert attached to her, isn't being told she needs to marry Loras Tyrell, and what's Cersei going to do? We can assume her hope is that Jaime is going to rule beside her in a Targaryen-style kingship. But, judging from the look on Jaime's face when he saw the crazy that has taken over his twin, this plan might not work out for the duo.

Before, the crew that rolled with Cersei was her children, Littlefinger, Varys, and Jaime. Her kids are all dead, Littlefinger is trying to take over the world, evil mustache and all, Varys has moved camps to Daenerys-town, and Jaime, too, seems a bit shaken by his sis. Now she's hanging out with creepy Qyburn and his little urchin murderers, as well as Frankenmountain. Her team is much scarier, but also much smaller.

11. She's Over The Whole Lannister Thing

12. We Actually Sympathize With Her Now

Seeing the way Robert treated his Queen, then watching her grieve at the deaths of her family members, topped off by that horrible "shame" walk, has really made Cersei seem like a human character. Maybe, she hasn't changed that much for the better, but at least now she's suffered so the audience feels for her.

Cersei's father Tywin and her husband, Robert, treated Cersei like she was chattel. But, since they've been gone, she has been in charge of her own destiny. It's a really great thing to see.

14. She's Got Nothing Left To Lose

In the premiere, if Cersei's relationship with her brother was discovered, both of them would be arrested for treason, her children would probably be murdered, and she could say "bye bye" to the Iron Throne. Now, she's sans family, sans a shaming religious elite, and sans any cares in the world.

Love her or hate her, Cersei has changed a lot since she first stepped on the scene in the premiere of Game of Thrones. It is really interesting how we have all grown to, if not love, then at least no longer despise this character. Cersei Lannister has been through hell and back, almost to the same degree as the Stark family (but not the same degree, because she's the reason for all her problems). It has been a real treat getting to know Cersei, and I secretly hope she makes it through the entire series.