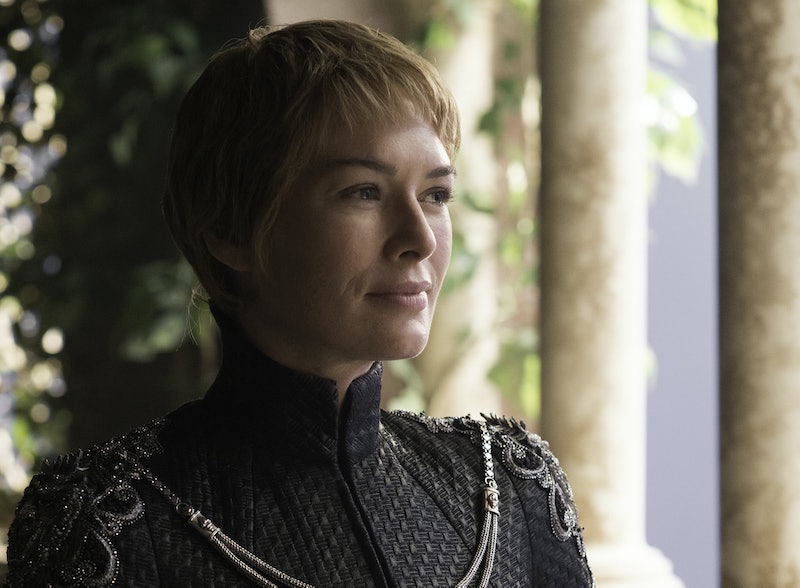 With only two shortened seasons left in its run, HBO's Game Of Thrones killed off a lot of villains this year, clearing the deck in order to pave the way for the show's final big bad: the Night's King and his army of White Walkers and wights. Roose and Ramsay Bolton, Alliser Thorne and Olly, the Waif and Walder Frey, and the High Sparrow, and his Faith Militant henchmen were among the many antagonists who perished in Season 6. In fact, pretty much the only major villain left in Westeros as Dany approaches from the east and the Night's King from the north is Cersei Lannister, the newly-installed Queen of Westeros herself. But is she really all that bad? Is Cersei a villain or a hero?

Smirking at the fiery deaths of your enemies from the safety of your evil lair; that's pretty much the stuff of comic book supervillains right there, right? Given the sheer wanton destruction and disregard for collateral damage, it would be incredibly difficult to make the case that Cersei is a "hero" at this stage in the game. But while Cersei and her Rhythm Nation outfits may be tipping more towards the "evil" side of the scale at the end of Season 6, I would still argue that the character is more of an antihero than an outright villain.

To understand why, we have to go back to a formative moment from the show's first season. In the Season 1 episode "You Win Or You Die," Cersei recited the title line to the ill-fated Ned Stark. After the Hand of the King has (unwisely) informed the queen that he knew her children were the product of incest, she told him:

"You should have taken the realm for yourself. Jaime told me about the day King's Landing fell. He was sitting in the Iron Throne and you made him give it up. All you needed to do was climb the steps yourself. Such a sad mistake. … When you play the game of thrones, you win or you die — there is no middle ground."

Everything the character has done since has been in service of that ethos. Having been married to a king and given birth to two more, Cersei knows the game inside and out — and how fickle and fleeting power can be. And if that's true for men in the world of Westeros, then it's doubly true for women. Even as the highest-ranking woman on the continent, Cersei never had any true power… at least, not until she took it for herself.

Everything Cersei has ever done has been for self-preservation; and in a world as cruel and unforgiving as the Seven Kingdoms, it's hard to argue against that. Heck, it doesn't make her all that different from any of the other female characters on the show, like Daenerys Targaryen, Margaery Tyrell, or Sansa Stark. Cersei has perhaps the most in common with the latter young woman; both smitten with a fairy tale image of a prince when they were young (Rhaegar for Cersei, Joffrey for Sansa) before being married off to men they didn't love (Robert and Ramsay), and both suffering emotional, physical, and sexual indignities at the hands of those men, only to finally kill their husbands and rise to power in their places.

For a while, what distinguished Cersei from the likes of Sansa was her methods; the Lannisters have always been willing to go farther and shed more blood than pretty much anyone else. (See: the Red Wedding.) But not even Cersei murdered Robert herself; rather, she had a boar do the dirty work for her, with some help from her cousin Lancel and copious amounts of wine. Sansa, on the other hand, fed Ramsay to his own starving hounds… and smiled as it happened. (Granted, seeing as Ramsay sexually abused Sansa, she earned a bit of that smile.)

It's getting harder and harder to find major points of contrast between these two characters, who are both so fervently devoted not just to themselves, but to the idea of family — and taking vengeance against anyone who has wronged that family. Pretty much the only thing that continues to make Sansa more sympathetic in the eyes of the audience is that we also happen to hate the people she hates: namely, the Boltons and the Freys. However, with the exception of the High Sparrow, we actually rather like the people Cersei hates: namely, the Tyrells and her brother Tyrion.

Of course, Cersei's unwavering love for her children and her fierce protectiveness of them has always been the most humanizing thing about her. Now that all three of them have been covered by their prophetic golden shrouds, it will be interesting to see what Cersei does next. But no matter how bad things get in Season 7, I would urge us all to not think of Cersei as a villain, but rather as a tragic figure deserving of our empathy.

After all she has been through — a loveless marriage, the deaths of all her children, a horrific public shaming — can you blame Cersei for following her own advice? "All you needed to do was climb the steps yourself," she told Ned. Of course, he didn't… and his head ended up on a spike. Cersei didn't make the same mistake, sitting on the Iron Throne in the final moments of the Season 6 finale. She finally won the game of thrones, at high cost to herself and those around her; unfortunately for Cersei, her victory comes just as Daenerys has set sail for Westeros, determined to "break the wheel" once and for all.