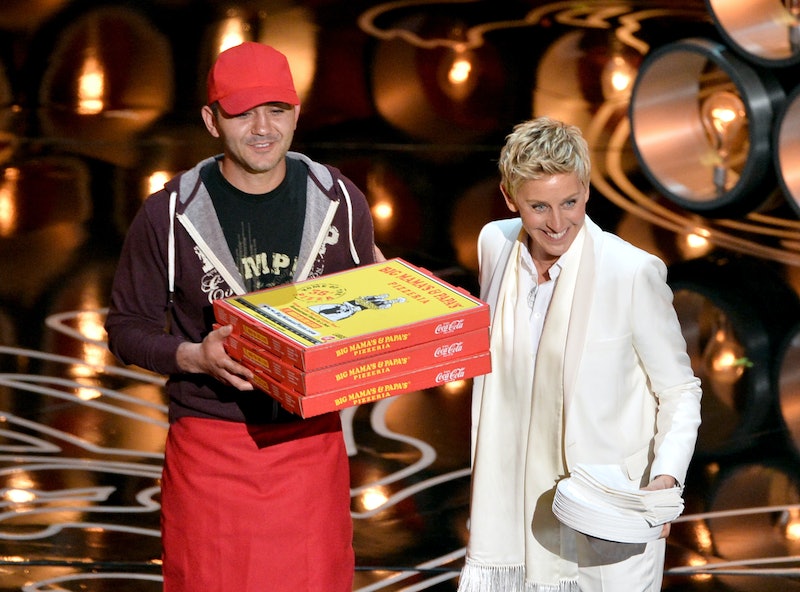 The actors in the audience weren't the only ones excited about pizza at the Oscars, the owners of the pizza place were pretty happy too. When Ellen DeGeneres ordered pizza from Big Mama's and Papa's Pizzeria, they got free advertising during one of the most watched television events of the year. According to Entertainment Weekly, this year's Oscars brought in 43 million viewers giving it the highest non-sports viewership since the Friends finale in 2004. That means 43 million people, minus the ones taking bathroom breaks at the time, saw a man from Big Mama's and Papa's deliver pizza to Brad Pitt, Kerry Washington, and Kevin Spacey. Not Leonardo DiCaprio though. He doesn't care for pizza.

Because of the extremely high audience, a 30-second commercial slot during the Oscars goes for about $1.8 million. Big Mama's and Papa's — as far as we know, this could be some sort of sneaky deal — got well over 30-seconds for free. The pizzeria is very excited about this and their website shows it. The homepage is covered in Oscar news including a video of DeGeneres handing out slices and a picture of the delivery driver standing on stage.

TMZ got a couple videos of the delivery guy, reportedly named Edgar, showing his coworkers cheering for him and his expert question dodging skills. TMZ presses Edgar about whether or not he got the tips DeGeneres collected in Pharrell Williams' hat, but he doesn't respond. Edgar knows how to handle a paparazzi situation proving that he was the correct choice for the Oscar delivery.

While Mama's and Papa's seems to be overjoyed that their pizza place was the chosen one, it is not their first claim to fame. The pizzeria holds the Guinness World Record for the "largest pizza commercially available."