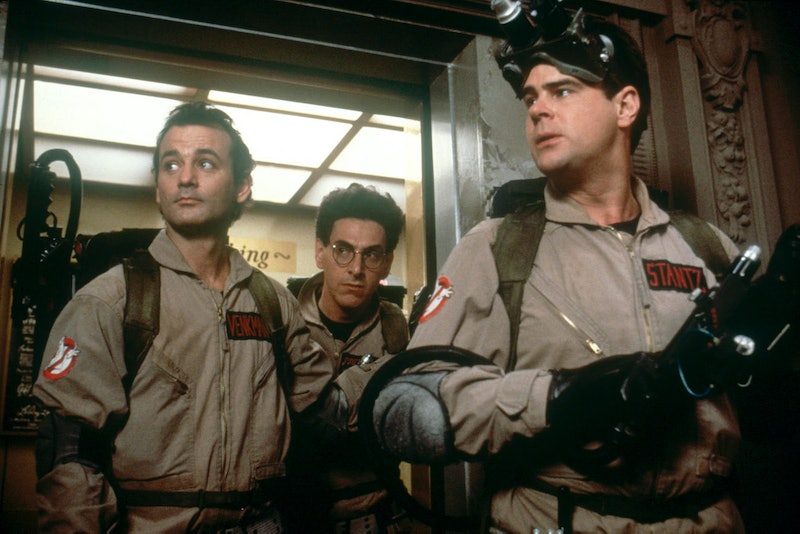 It's almost time for four female comedians to ruin the childhoods of insecure men-children! That's right, the Ghostbusters reboot featuring an all-female ghostbusting team is finally hitting theaters, and while some bitter fans of the original are still planning on dragging their feet to see the new movie, others have jumped on board. When the all-women Ghostbusters reboot was first announced, it was met with a huge amount of backlash. Now that the movie is about to be released, that backlash has lessened a little, and one thing that probably helped skeptics go from haters to movie-goers is the fact that a lot of the actors from the first movie are said to be returning to the franchise. But just which original cast members are in Ghostbusters ? I've got the list right here.

Murray is set to make a cameo appearance in the Ghostbusters reboot. The famously picky and private actor has even made appearances to promote the film, suggesting his whole-hearted involvement. It's been rumored that all returning cast members will be playing all new characters, so who Murray will appear as is anybody's guess.

Aykroyd was the first original cast member to get involved in the Ghostbusters reboot, and seemed the most eager to appear in the movie. His cameo was reportedly revealed in a clip shown during CinemaCon in April. I won't spoil the details for you here except to say that Aykroyd delivers an iconic Ghostbusters line. If you want to be thoroughly spoiled, you can check out the description here.

Weaver's cameo in the Ghostbusters reboot was confirmed in a tweet from Feig. Though he wanted to keep news of Weaver's involvement a secret, when he saw that the news was about to leak, Feig beat the tabloids to the punch, writing, "The awesome Sigourney Weaver is going to be in our movie!"

Despite knocking the idea of an all-female reboot when it was first announced — "I love the idea of including women, I think that's great. But all-female I think would be a bad idea," Hudson told The Telegraph in 2014 — Hudson will appear in the film. He was spotted on set towards the end of production, and has been a supporter of the movie since the cast was announced.

Potts is, according to The Boston Herald , returning to Ghostbusters not as a receptionist (she's been replaced by Chris Hemsworth), but as a hotel clerk. Details of Potts' cameo, as well as those of Aykroyd and Hudson, seems to confirm the theory that none of the returning cast members are reprising their roles.

It's possible other familiar faces will pop up throughout the film — some cameos could have been successfully kept secret. We'll just have to wait and see.