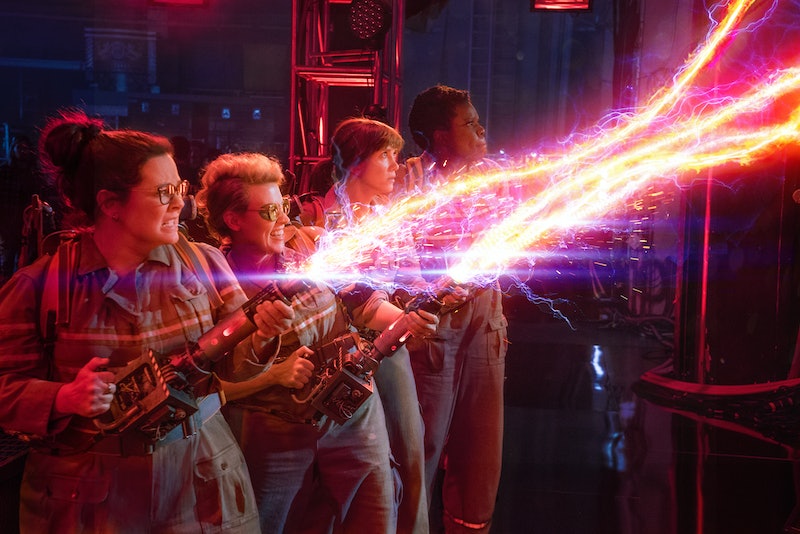 Since the moment we heard the words "all-female Ghostbusters," no amount of intel about the Paul Feig reboot of the classic Bill Murray and Dan Aykroyd classic was enough. First came the shot of our four heroes — Melissa McCarthy, Kate McKinnon, Leslie Jones, and Kristen Wiig donning their version of the iconic jumpsuits and ready to kick ass. The crowd, for all intents and purposes, went wild. Then came the image of the Ghostbusters' trusty assistant, played by Chris Hemsworth, riding a motorcycle in black frame glasses. The internet practically lost its mind.

I'd explain what happened when co-writer and director Paul Feig tweeted an image of the new proton packs, but I think you're starting to get the idea. But then, in September of 2015, towards the end of production, myself and a few other reporters were lucky enough to check out some behind-the-scenes action on the Ghostbusters set in Boston, where we had the chance to find out a whole new set of details about the highly anticipated comedy.

While the cast and crew didn't spoil the film's slew of surprises for us, they did tell us more than a few tricks behind one of the most talked-about films of 2016. So without further ado, here's what I learned on the set of Ghostbusters.

1. Melissa McCarthy Is Just As Wonderful As You Think She Is

Not only did McCarthy's costars say the nicest things about her ("Melissa is like a mother, she’s very nurturing," says Leslie Jones, and "She has a really smart writer brain," says writer Katie Dippold), but as McCarthy walked around set, she showered everyone she encountered with "hellos" and compliments. So go ahead, keep wishing you could be her BFF.

I was not allowed to photograph it or know anything about the ingredients in said slime, but I bravely put my hand in it. And I can just as bravely describe it as a jar full of perfectly manufactured synthetic snot.

3. They're Serious About Science — Super Serious

Dippold says that she chatted with physicists at Columbia University in order to learn enough to write four ghost-hunting scientist characters. ("And then they realized that they had to go way more to the beginning of explaining things to me, before we could get to anything," she laughs.) But don't worry, there will still be elements of that goofy Ghostbusters science as well.

"Our goal was to make all the science seem as real as possible but at the same time, Dan Aykroyd was so good at the fake science mumbo jumbo, so we’re trying to keep that spirit alive at the same time," says Dippold.

4. But No One Is As Serious About Science As Kate McKinnon

McKinnon says she was excited about the gadgets from the film because they're right up her alley. " I used to really love electronics and taking stuff apart and like looking at circuit boards so that’s my favorite of the new stuff," she says.

What's more, is that she'd already done plenty of the required reading. "I did read a few physics books in preparation, but I have been reading physics books since I was young," she says. "So it’s pretty serendipitous."

5. Dan Aykroyd Contributed To The Writing Process... Sort Of

... in that he wrote screenwriter, Dippold, to help explain his former characters' sciency "mumbo jumbo." "He actually weighed in with stuff to call things, so that was a wonderful email to get," she says.

6. You Never Saw The First Photo Of The New Ghostbusters

According to Jones, they were all together for the first time at SNL 40 when they took a picture of the new squad. "We were wasted. We were all like, 'We’re the ghostbustahhhhhhs!'" she says.

7. This Movie Was An Insane Workout For The Actors

8. Even The Ghostbusters Get Scared

The ghosts in this movie are serious — brought to life with intense costumes and lighting and then highlighted to perfection with special effects after the fact — so serious that the actors themselves even got a little spooked once or twice.

"We had somebody chasing us down a subway thing, literally, I gave a couple of good shoves because first of all he was coming at us really fast on a wire," says McCarthy, describing a particularly scary scene. "And I've known the guy for like 10 years, but he went through like six hours of prosthetics—"

"—He was glowing, blue lights, [on] his teeth," adds Wiig. "And he was above us going at a speed and we sort of had to run away from him and there was one take where he went like faster than normal and we were like, 'Oh my god.' (According to McCarthy, Jones "really lost it.")

9. Chris Hemsworth Is The Best Human

Just take a gander at this sampling of testimonies from his fellow actors (and one writer):

Leslie Jones: "Oh Chris. Mm. Let’s just take a moment and give Chris his due. Goddamn. He’s a goodlooking man. He’s a real good looking man. He’s so sweet. He’s too normal for how good looking he is. I’m so serious. Seeing him talk to his kids and it’s just like how are you this beautiful and this normal? He’s awesome."

Katie Dippold: "He was so goddamn funny, I feel like I’ve never laughed so hard than [his and the Ghostbusters'] scenes together.

Melissa McCarthy: "Chris Hemsworth made us break more than anybody, which is like, don’t you have enough? Haven’t you been given two scoops to begin with? He is a really really funny guy and one of the best improvisers I’ve ever worked with. That was not our most professional day, there were tears. And it was like he must think we’re awful. I was bawling at one point."

So there you have it. Chris Hemsworth is just the best.

"I didn’t personally like the idea of going '25 years ago' and also I didn’t want them to be handed technology," he says. "I think it’s so fun that they’re scientists they’re all different branches of science who really built this from the ground up."

And for that, I just have to offer a preemptive thank you, because if there's one thing we really need in this cinematic world, it's more kickass ladies using science to do kickass things.

11. Leslie Jones' Favorite Ghostbuster Isn't One Of The Original Guys

Her pick? Sigourney Weaver, with the caveat that she "was a kid." But if you ask me, maybe some part of her just knew that someday, the term "female ghostbuster" would become a reality.

"I think the character is like me and that is kind of upsetting because she’s weird and I think she is basically just me," she says. "People might not believe that what they’re seeing is an actual person but she’s just me."

Bring it on, girl.

He just, well, chose them because they were the right costumes.

"When we released the pictures of the uniforms, I got so many tweets from women who were like, 'Thank God you didn't try to make them tight and sexy' and it's just like, it never even crossed my mind [to make the outfits sexy]," he says. "People bring such baggage, men and women, to the idea of anything that all female based and it just shows that what’s endemic about how we’re so programmed to think."

Whatever the reason, I'm just glad we got Ghostbusters who can really kick it into high gear in costumes that are actually practical. Or costumes in which, as McKinnon pointed out, "my crotch can breathe." Don't settle for anything less, ladies.

More like this
How The Thanksgiving Episode Of 'Gossip Girl' Changed Pop Culture History
By Gabrielle Bondi
Michelle Williams Laughs Often About Motherhood Thanks To 'The Fabelmans'
By Marina Watts
'Wakanda Forever' Is Already Opening Doors For Mabel Cadena
By Grace Wehniainen
Marcus Mumford, Open Book
By Ilana Kaplan
Get Even More From Bustle — Sign Up For The Newsletter