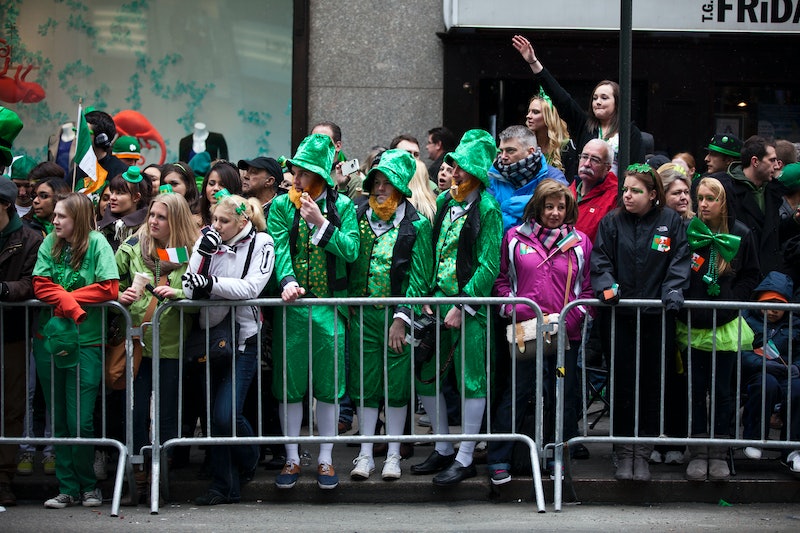 You don’t need to be Irish to celebrate St. Patrick’s day. All you really need is a Kelly Green T-shirt, a tolerance for crowds, and a supportive group of friends who will wake you up at eight in the morning by blasting bagpipe music. But, if that’s not quite celebratory enough for you — if you want to have the kind of St. Patrick’s Day that’ll go down in history — you may want to consider spending March 17 in one of these cities, which host some of the biggest (and wildest) St. Paddy’s Day festivities in the world.

We made our selections for the best towns to celebrate St. Patrick's day based on three criteria: a significant Irish population, a prevalence of bars and pubs, and noteworthy St. Patrick’s Day traditions. We settled on 12 cities that make ideal St. Paddy’s Day destinations.

Boston has the largest percentage of Irish people in the United States (20 percent), and its St. Patrick’s Day celebration is proportionately huge. The South Boston (“Southie”) Parade is one of the most famous (and, this year, most controversial) in the country. But the real party begins with the city’s official four-day, 15-bar pub crawl, which PubCrawls.com (yes, it exists) calls “one of the most anticipated events of the year.”

Where is our St.-Patrick’s-themed episode of The Office? Scranton, the town in which the show is set, hosts a nationally renowned St. Patrick’s Day parade. With an estimated 12,000 annual participants, it is, according to the city, the second largest per capita parade in the nation.

Chicago’s St. Patrick’s Day tradition may be the most outlandish in the country, if not world. Every year, just a few hours before the city’s annual parade, members of the Journeymen Plumbers Union pour 40 pounds of green dye in the Chicago River, turning the major waterway into something resembling a giant Shamrock Shake.

The famously frigid city in Upstate New York pulls no punches when it comes to St. Patrick’s Day. In addition to a large parade, Buffalo — which ranks as the eighth most Irish city in the U.S. — also hosts the largest AOH (Ancient Order of Hibernians) event in Western New York. But let’s not Irish step dance around the real attraction of the city: its bars. International Business Times reports that Buffalo is number 10 on the list of the U.S. cities with the most bars per capita, with seven bars for every 10,000 people.

In recent years, Australia has seen a boom in its Irish population, with the largest concentration living in Sydney, where 6.6 percent of residents claim Hibernian descent. Sydney hosts a large St. Patrick’s Day parade, but its most iconic tradition its transformation of the famous opera house into a bright green symbol of Irish pride.

Irish-Americans make up about 10 percent of the population of Kansas City, and St. Patrick’s Day is one of the city’s biggest cultural events of the year. In addition to a large parade, the city’s dozens of Irish restaurants and bars throw special events and offer pub-crawl-friendly deals.

The first city in the United States to host a St. Patrick’s Day still throws a killer one: Every year, nearly two million spectators line the sidewalks of Fifth Avenue to watch more than 20,000 people march. After the parade, the green-shirted masses take the city’s bars and restaurants by storm. Like Thanksgiving and New Years, this is a day many wise Manhattanites reserve for pajamas, Netflix, and Seamless.

Butte calls itself the “Fifth Province of Ireland,” owing to its large Irish-American population and rich Hibernian culture. Its St. Patrick’s Day parade is so well-known throughout the region that most cities in Montana offer to bus residents to Butte for the festivities. Who knew: an oasis of Guinness and bagpipes all the way out in mountain country.

The fact that Toronto once named its official hockey team the St. Patricks gives a good indication of how it feels about its Irish heritage. St. Paddy’s Day traditions include a parade that draws 100,000 spectators and a pub crawl through the city’s many Irish watering holes. (Guinness’ North American breweries are in Canada, so beer-hounds may want to think about getting their St. Paddy’s Day fill closer to the source.)

Surprise! In the land of verandahs and debutante balls, St. Patrick’s Day in heavily Irish Savannah, Georgia has become one of the largest cultural celebrations in the southeast. The city’s parade—one of the largest in the nation—draws as many as 500,000 spectators, making St. Patrick’s Day, according to TripAdvisor, “the most defining day on the calendar in Savannah.”

The scale of Philly’s St. Paddy’s Day celebration owes as much to its large Irish population as it does to its beer scene and its famously hard-partying denizens. The parade — which is the second oldest in the country — kicks off a day of events that includes a pub crawl (duh), a Leprechaun Run at the Navy Yard, and a tour of Irish historical sites at Laurel Hill cemetery. (It is not recommended that these activities be combined.)

There’s probably nothing quite like celebrating St. Patrick’s Day in the capital city of the motherland, and if you have the chance to go, you won’t be disappointed. The celebration, which stretches over a number of days, includes a world-famous parade, a treasure hunt, a dancing festival, a gorgeous “greening” of the city’s buildings and monuments at night, and enough drinking to put even the hardest of partiers stateside to shame.