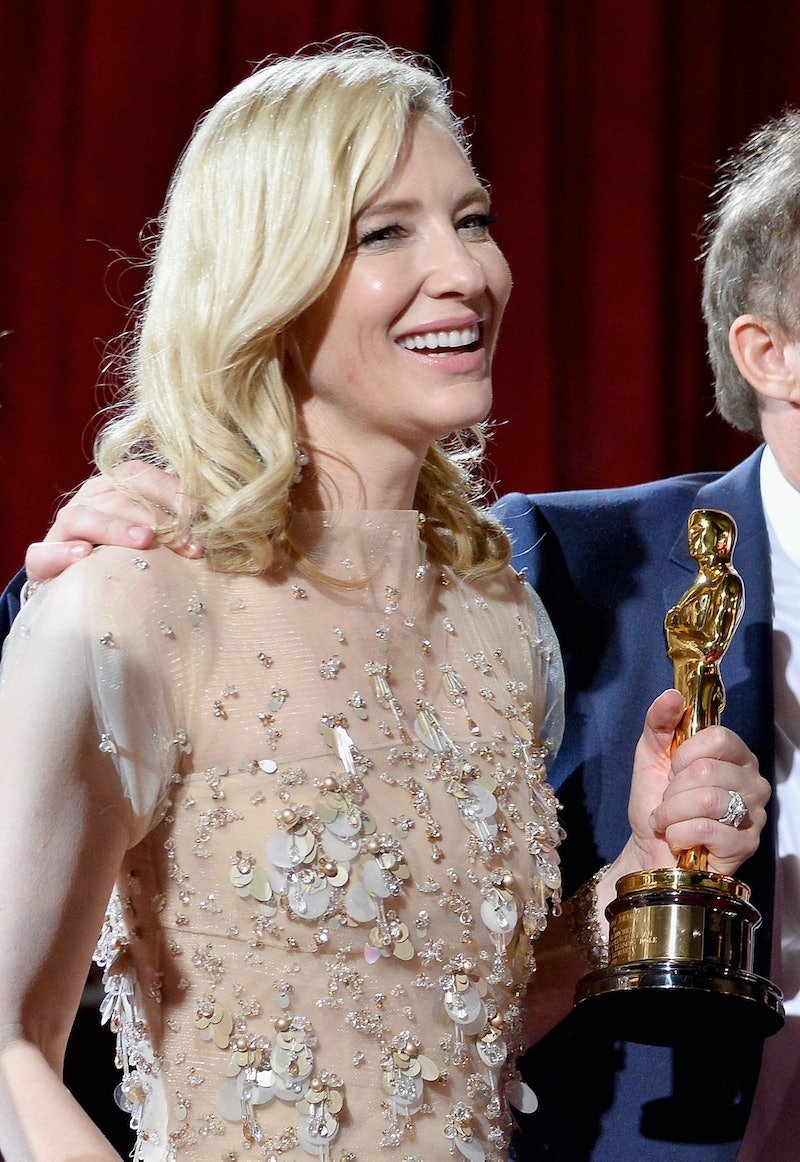 Sunday night, Cate Blanchett scooped up the Academy Award for Best Actress for her extraordinary performance in Blue Jasmine. It was the opposite of an upset, as she was more or less a lock the instant that movie wrapped. I mean, did you see Blue Jasmine? She was a force of freakin’ nature. A hurricane demolishing everything and everyone in sight. And though her win was a no-brainer, Blanchett's shoutout to Julia Roberts during her acceptance speech was an “Excuse me, uh whaaat?” moment. After a few gracious and genuine words about the other nominees, she looked at Roberts and said, “Julia, hashtag suck it. You know what I mean.”

As if the inside joke wasn't enough, Blanchett also let an F-word fly on CNN: When a post-show reporter brought up Blanchett being the first Australian to win two Oscars, she interjected, “And don’t you fucking forget it.” The reporters went nuts, I went nuts, CNN was like, “AUGHHHHHH!” Dude, live TV is the best thing ever. There are two things that can happen on live TV that make laugh always: the F-word and flatulence. Farts are funny because DUH. As for the F-word? Well, I imagine every time an unexpected F-word is uttered on live TV, absolute pandemonium ensues behind-the-scenes: “NOT THE F-WORD! NOOOOOOOO! WHY ISN’T THIS ON DELAAAAAAY?!” (Tears hair out, gnashes teeth, faints.) Yep. Live TV F-words amuse me because of the scenarios I create in my mind. Cool huh?

Blanchett didn’t pass gas (had that happened, I would be writing this from my grave), but she did toss an F-word out into the world. I will cherish it always. Thank you for sharing it with us, CNN.

I apologize, I was temporarily distracted by Blanchett dropping an F-bomb on live TV. There is another very important matter that I must attend to: WHAT DID HASHTAG SUCK IT MEAN?!?! What happened in the bar between Roberts and Blanchett? I didn't give it enough attention before. I must try to deduce what transpired.

Oh, the Blanchett/Roberts dance battle I've dreamed up? It's giving me a new lease on life.