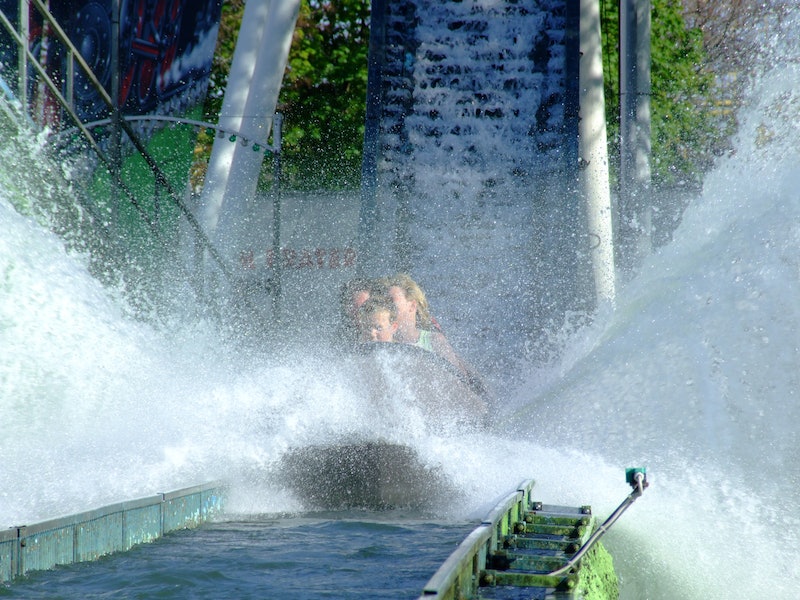 The award for the bravest boldest babe today goes to: Gina, the 16-year-old Californian girl who came out on Splash Mountain by holding up an "I'M GAY!" sign in her reaction photo. Because even now, in today's society, coming out as gay can feel dangerous for many teens. Despite the advances in equality and despite the support from administrators, celebrities and politicians, many families across the country are still not on board. And losing the support of your family when you're a kid, can be more than heartbreaking, it can be debilitating.

A recent survey found that 40 percent of gay, lesbian, bisexual, transgender or queer adults were rejected by friends or family after coming out of the closet — a very real reason why many teens decide to stay in the closet.

That said, one might say that Gina, whose truth was embraced by her loving and supportive family, is lucky. Going into her decision to come out as gay, Gina felt mostly confident that her relationship with her family was not in jeopardy, she tells Buzzfeed. What she knew of them and their opinions, lead her to believe that she had a good chance of being accepted for who she was. But like any teen, worried about their safety in their life outside of the closet, Gina was not 100 percent sure how her family would react. And so while this was a fun experiment, it as also incredibly nerve-wracking for her.

In the past, we've seen clever pranks and proposals in Disney theme park reaction shots. But never before have we seen a teen using it to tell her family that she identifies as gay. Talk about powerful. Talk about memorable. Talk about influential. Because the internet is becoming a better place to be yourself and find support, Gina's declaration was met with open arms and enthusiasm. Thousands of people across the country retweeted and favorited to show their support and to spread their love. With two friends already in the know, Gina was waiting for the perfect opportunity to talk to her family. A few days before a family vacation to Disneyland, it struck her as the perfect place to come out.

Hopefully one day, teens won't have to come out because they won't have to feel like they need to hide who they are from the very beginning. But until we get there, we have brave babes like Gina to thank for being slowly but surely teaching the rest of the country to be more accepting, move loving, and more progressive. I hope Gina's experience inspires more teens to step forth and share their truth, and even more so, I hope it inspires more families to be supportive and embrace their children for who they are.

Bustle reached out to Gina and will update this post if/when we hear back from her.