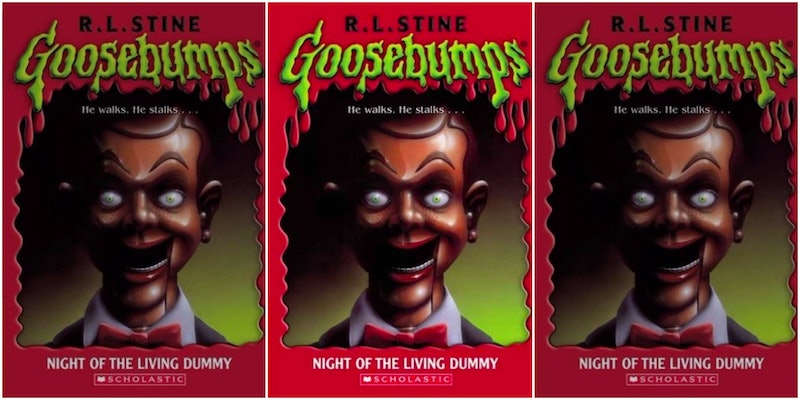 A couple of months ago I was home visiting my parents when they suggested that we watch the new Goosebumps movie. I had grown up reading the books, but it had been years since I picked one up. I reluctantly agreed, assuming the movie would be corny and laughable at best.

It was actually pretty decent. And it reminded me how weirdly scary the Goosebumps books are.

I'll be the first to admit I'm a little bit of a chicken, so maybe you should take this with a grain of salt. But the Goosebumps books were kind of horrifying, right? They all involved a kid getting attacked by some kind of monster, often with a bizarre and dark twist for the ending. They weren't on H.P. Lovecraft-level of horror or anything, but considering that they were written for young readers, they're still pretty terrifying.

One of my biggest fears as a child was dolls, so The Night Of The Living Dummy was my personal nightmare, but I remember getting scared by many of the other Goosebumps titles. I can count at least 10 times that the Goosebumps series ruined my life as a child. If you managed to read them all and escaped without being scarred for life, I give you a lot of credit.

1. When you were afraid to wear a mask for Halloween in case it latched on to your face

I never wore a mask on Halloween, and I'm pretty sure The Haunted Mask had something to do with it. Poor Carly Beth just wanted to scare a few bullies, and instead she ended up turning into a hideous monster, unable to remove her demon mask. I'm 25 years old and I still refuse to wear a mask. I'm not taking that risk.

2. When you refused to go anywhere near a ventriloquist dummy

First of all, even those who have never read Goosebumps should avoid ventriloquist dummies because they're super creepy. But if you're familiar with the Night of the Living Dummy titles, you know to be extra cautious. Because they're probably alive and looking to kill your dog/destroy your family/ruin your life, etc.

3. When you worried that you were going to ruin someone's life by taking their picture

Even though I've taken a ton of pictures (and Polaroid cameras aren't really a thing anymore), I still get a little nervous taking a look at my shots. What if, like Greg in Say Cheese and Die! , I've accidentally stumbled upon some sort of demon camera that may or may not injure the subject of its pictures? I'll stick to taking pictures on my phone, which as far as I know it isn't evil.

4. When you suddenly had an irreversible fear of scarecrows

Like ventriloquist dummies, scarecrows are inherently creepy and not to be trusted. If you didn't know that before The Scarecrow Walks at Midnight , you learned your lesson after reading the book. Sure, it's possible that not every scarecrow is a part of some sort of scarecrow army that's holding your grandparents' farm hostage, but why try your luck? Avoid all of them, just in case.

5. When you knew you were right to dislike sports

Did anyone else feel a little bit vindicated after reading The Horror at Camp Jellyjam? Like no, I'm not good at sports, and that's the only thing keeping me from being enslaved by a giant blob monster! This definitely gave me incentive to not try too hard during gym class. Suddenly being uncoordinated seemed like a great survival strategy.

6. When you started thinking that maybe your mom was right about eating too much candy

Sure, my parents and my dentist warned me about the dangers of eating too much candy, but nothing drove that message home more than Attack of the Jack-O'-Lanterns. When Drew and Walker are kidnapped by the pumpkin-headed villains and forced to eat as much Halloween candy as possible to fatten themselves up for slaughter, I officially swore off stuffing myself with Halloween leftovers.

7. When you were given extra incentive not to be a bully

8. When you started being pretty suspicious of your neighbors

If you read Welcome to Dead House as a kid, you probably got a little nervous at the idea of having to move to a new neighborhood. What if, like Amanda and Josh, you ended up surrounded by the living dead, and all of your neighbors were more interested in your blood than in welcoming you to the area? Just make sure to let your dog check your neighbors out before you move into a new house; they're apparently pretty good at sniffing out the undead.

9. When you avoided looking in the mirror

When Max and his friends find a mirror in his attic that appears to make them invisible, they think it's a great game. Until their reflections slowly start taking over their lives and replacing the real kids with their mirror versions! Let's Get Invisible! helped to scare the vanity out of me as a child and made me avoid mirrors for a bit (too bad I relearned all that vanity as I grew up).

10. When you didn't want to be the girl who cried wolf

Or The Girl Who Cried Monster , specifically. Lucy's tells so many stories about monsters that no one believes her when she finds a real one running the library. It's like a scarier version of "the boy who cried wolf" (though that's a terrifying cautionary tale all on its own). If I ever had a penchant for telling tall tales as a kid, this book scared that trait right out of me.

More like this
'Bridgerton' S3 Teases Exciting Social Season For Penelope Featherington
By Bustle
David Tennant’s Transformation In ITV’s 'Litvinenko' Is Astonishing
By Sophie McEvoy
The 'Lady Chatterley's Lover' Book Leaves Us With A Troubling Question
By Catharina Cheung
You Definitely Know The Voice Of Shuri's AI In 'Black Panther: Wakanda Forever'
By Brad Witter
Get Even More From Bustle — Sign Up For The Newsletter