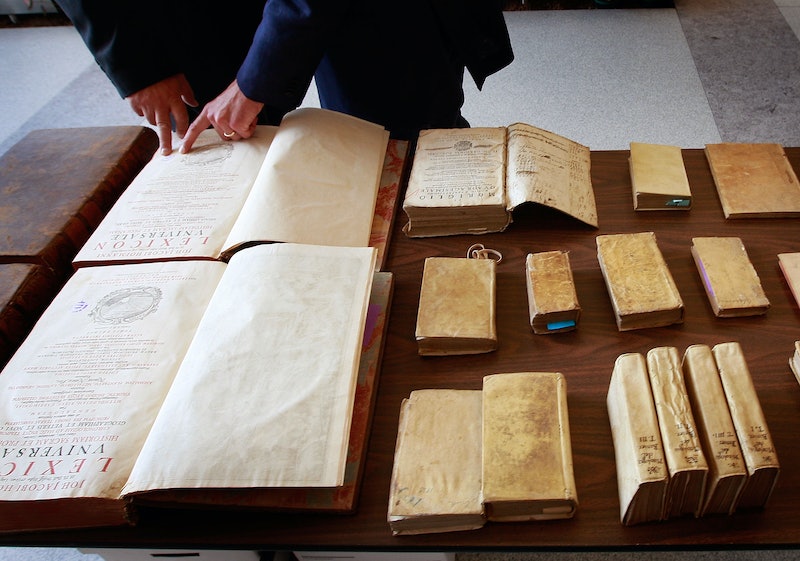 It's not often that the story behind a piece of writing is weird and interesting enough to be considered entertainment in its own right, but that happens to be the case with the lost H.P. Lovecraft story, "The Cancer of Superstition." In 1926, Harry Houdini — !!! — commissioned the ghostwritten story from Lovecraft as part of his campaign against spiritualists. When Houdini died the following year, his widow did not ask the author to continue writing it. After Bess Houdini's death in 1943, "The Cancer of Superstition" was bound in a collection of the couple's papers, and passed from owner to owner.

Recently rediscovered by private buyer, and set to go to auction in April, the story is a treatise against the "prehistoric ignorance" that drives individuals to psychic charlatans. Gabe Fajuri, president of Potter & Potter Auctions, says the story's mystical background makes it a high-interest piece. He tells The Guardian:

The manuscript deepens the debate over the legacies of two figures whose popularity rested on playing to both sides of their audience’s curiosity over issues including spiritualism, supernaturalism, the real and the unreal.

While Lovecraft entertained readers with weird and horrific science fiction and Houdini amazed audiences with displays of superhuman escapes, both are to be found here in what they call a "campaign" against superstition. They argue that all superstitious beliefs are relics of a common "prehistoric ignorance" in humans.

Lovecraft is best known for the weird fiction — yes, that's a genre — that comprises his Cthulhu mythos: a set of stories centered around a pantheon of gods and demons that exist outside of time and space. The most famous of these Great Old Ones is Cthulhu himself, described as an amalgamation of "an octopus, a dragon, and a human caricature," with "a pulpy, tentacled head [that] surmounted a grotesque and scaly body with rudimentary wings."

But Lovecraft has a darker legacy — one that cannot be denied. He was a virulent racist. Even for the Victorian and Edwardian periods — when, many would say, most every white person was racist — Lovecraft's xenophobia was extreme.

His prejudices come through most clearly in his letters. In a 1922 diary entry, Lovecraft described New York City's Chinatown as "a bastard mess of stewing Mongrel flesh without intellect, repellent to the eye, nose and imagination." Yikes. Just a guess, but Lovecraft probably would have voted for Trump.

That isn't to say that Lovecraft's xenophobia didn't leech into his fiction, as well. "The Horror at Red Hook," "The Rats in the Walls," and "Facts Concerning the Late Arthur Jermyn and His Family" all contain overt racism, which often manifests itself as integral to the plot.

When he died in 1937, Lovecraft was not financially successful. It was not until the mid-20th century, when August Derleth published a collection of the author's work and began to flesh out the Cthulhu mythos, that Lovecraft achieved popularity. Over the next several decades, Lovecraft's work influenced top names in horror and science fiction. Today, his face and creations have become ubiquitous.

Lovecraft's popularity requires fans and detractors alike to address his racism. To many of his devotees, bringing up Lovecraft's racism as a negative is tantamount to burning his books. As Salon's Laura Miller points out, it's a safe bet that some of these folks are racists themselves, including as the commenter who wrote: "If his racism was necessary for him to create those brilliant works of art, than [sic] thank god for his racism ... It cannot be surprising that a man who so valued architecture and the written word would have issues with cultures which [sic] had never mastered either, such as that of Africa and Native America." Again, yikes.

This is all to say that open and honest conversations about the intersection of prejudice and Lovecraft's work are almost impossible to have. The situation reached critical mass in late 2015, when the World Fantasy Convention retired the Lovecraft bust that topped its award trophies. Although many Lovecraft fans felt that the decision insulted the author's talent and legacy, several fantasy authors — including Nnedi Okorafor and Daniel José Older — pointed out that having a racist figurehead to represent the genre's highest award only served to further marginalize writers of color.

Despite the delicious irony of an avowed racist writing about baseless beliefs, Lovecraft may not have actually written "The Cancer of Superstition." When Derleth included the essay's first chapter, "The Genesis of Superstition," in The Dark Brotherhood and Other Pieces, his introduction claimed that the piece was outlined by Lovecraft, but penned by C.M. Eddy, with whom Derleth was acquainted.

All three chapters hit the auction block on April 9, with bids starting at $13,000.