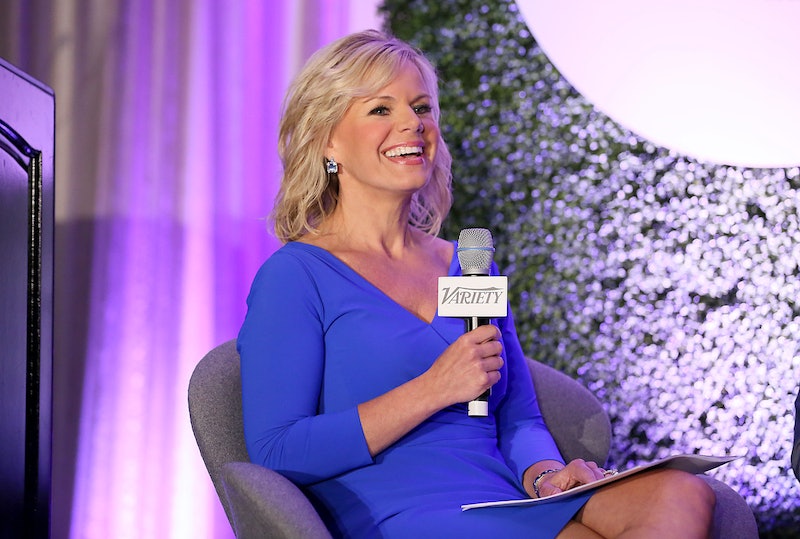 In a lawsuit Wednesday, former Fox & Friends co-host Gretchen Carlson alleged that Fox News CEO Roger Ailes had sexually harassed her, allegations that Ailes has not yet publicly responded to. She claimed to have been fired on June 23 for resisting the alleged advances, though Fox has not commented on that claim. Her leave went largely unacknowledged at the time, as at the end of June, Carlson tweeted that she was on vacation. Likewise, Fox never formally announced that she was leaving or had been fired. Bustle has reached out to Fox for comment. Update: Ailes made a statement on Wednesday evening, saying, "Gretchen Carlson's allegations are false. This is a retaliatory suit for the network's decision not to renew her contract ... This defamatory lawsuit is not only offensive, it is wholly without merit and will be defended vigorously."

Carlson had worked with the news network for nearly 11 years and had hosted Fox & Friends for seven and a half years. During that time, the former Miss America, author, and journalist had interviewed popular politicians like Barack Obama, Hillary Clinton, and Donald Trump, among others. In her complaint, Carlson's attorney outlined the nature of the case, highlighting how Ailes allegedly "retaliated" against the reporter's rejections by sabotaging her career. Ailes has not been able to be reached for comment on this claim. According to Carlson's attorney:

Ailes retaliated against Carlson in various ways, as described below, by terminating her employment on June 23, 2016, and, prior thereto, by, among other things, ostracizing, marginalizing and shunning her after making clear to her that these "problems" would not have existed, and could be solved, if she had a sexual relationship with him.

According to the lawsuit, Carlson confronted Ailes' in 2015, and Carlson's attorney quotes Ailes' alleged response to her complaints, which have not been confirmed or commented on publicly by Ailes.

In the months leading up to her termination, Carlson opened up about having reportedly been sexually harassed as a professional woman in an op-ed for The Huffington Post, but spoke only of alleged incidents that occurred decades prior. Acknowledging that sexual harassment remains prevalent today, Carlson passionately urged her readers to stop perceiving it as a "woman's issue." Instead, she maintained, young boys must also be taught to respect women.

The broadcaster released a statement following the lawsuit, stressing how she would like to stand up for other women who have found themselves in an unfair situation.

I have strived to empower women and girls throughout my entire career. Although this was a difficult step to take, I had to stand up for myself and speak out for all women and the next generation of women in the workplace. I am extremely proud of my accomplishments at Fox News and for keeping our loyal viewers engaged and informed on events and news topics of the day.

Bustle reached out to Fox News for comment and received this statement from Roger Ailes:

Gretchen Carlson's allegations are false. This is a retaliatory suit for the network's decision not to renew her contract, which was due to the fact that her disappointingly low ratings were dragging down the afternoon lineup. When Fox News did not commence any negotiations to renew her contract, Ms. Carlson became aware that her career with the network was likely over and conveniently began to pursue a lawsuit. Ironically, FOX News provided her with more on-air opportunities over her 11 year tenure than any other employer in the industry, for which she thanked me in her recent book. This defamatory lawsuit is not only offensive, it is wholly without merit and will be defended vigorously.