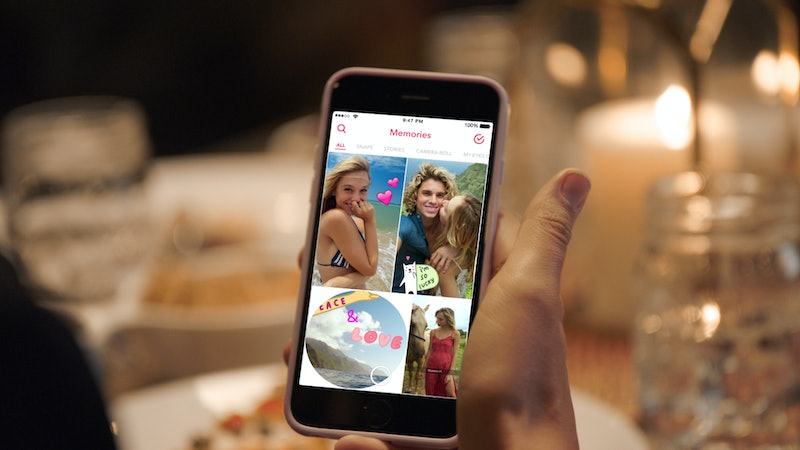 Just when you thought you'd finally gotten the hang of Snapchat's last round of updates, including video emoji and zany filters like Face Swap, the social media messaging app has upped its game once more — and it likely has you asking, "What is Snapchat Memories?" Because, well, that's the gist of the update this time: Snapchat just announced a new feature called Memories that allows you to save your Snaps to the app and utilize them in ways sure to make your little Snapchatting soul puke digital rainbows of unadulterated joy.

Indulge me if you will, and test the limits of your memory by stretching way back to 2011. Do you recall what you were doing? I don't. Any such memories of that time in my mind have long since been pushed out to make room for inane questions from my kids about things like vampire cats and whether or not Santa Claus and the abdominal snowman are BFFs. But I digress. One memory still rattling around in my brain from that time is the launch of Snapchat, founded with the promising premise that the app's messages would disappear mere moments after they were sent. It was the Vegas of the social media world — what happens on Snapchat stays on Snapchat!

Until, that is, people discovered you could always take a screen shot of your Snaps. Since that time, Snapchat has made it easier with subsequent updates to save your witty Snapchat repartee by adding a save button in the bottom left corner of the camera screen. And, with today's update, they've adding further dimension to this capability with Snapchat Memories.

Here's how adding something to your Memories works: After taking a picture, you tap the save button. Only once you have the update you can choose to save it to your Memories, as opposed to your phone. To access this personal curation of favorite photos you've saved to Memories, you simply swipe up from the camera screen. From there, you can do all sorts of fun stuff — you can make new Stories, edit photos you didn't edit the first go round and send them as Snaps, or even combine different Stories made with Memories into a longer narrative. If you do decide to add a pic from Memories into your Story and it was taken more than 24 hours ago, it'll appear with a frame around it as well as the date it was taken. Oh, and if you want to save an, ahem, sensitive photo you want to stay private to your Memories, Snapchat has you covered with the "My Eyes Only" password-protected option.

If you don't see the option to save to Memories right this second, don't worry. Snapchat is introducing Memories slowly over the next month or so. You'll get a Chat from Team Snapchat when it's available for you to use personally. So be patient, young padawans. You'll be stitching together new Memories-laden Stories in no time.