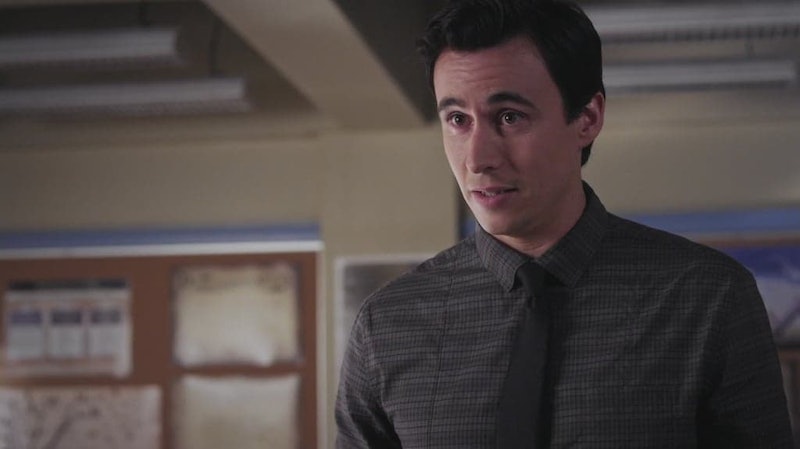 Fake identities are as commonplace on Pretty Little Liars as secrets, so it's no surprise that Alison's new husband/doctor has both. The truth was finally revealed about Dr. Rollins, and it definitely makes him look as shady as ever. After learning in the Season 6 finale that Dr. Rollins only married Alison for her money and that he was really in love with Charlotte, the show proved that Dr. Rollins was even more villainous than we could have ever imagined. Dr. Rollins held Alison hostage in a mental institution and tortured her, all because he believed that Alison was the one who killed Charlotte. Unfortunately for Dr. Rollins, his torture of Alison came at a steep price: Hanna hit Dr. Rollins with her car in attempt to rescue Alison. The man we knew as Dr. Rollins may be dead, but he might also not exist. As we learned in the PLL episode "The Talented Mr. Rollins," Dr. Rollins is a fake name, so whose corpse are the Liars burying?

It's Toby who discovers that Dr. Rollins might not be who he says he is. Using the police database, Toby discovers that the real Elliot Rollins received a moving violation — in 1958. It doesn't surprise me at all that Dr. Rollins is using the name of a dead guy in order to continue his super sketchy crusade, but the real question here is why would Dr. Rollins need to fake his identity. What would the Liars find if they put in his real name into the police database? It has to be something that would instantly put him on the Liars villain radar.

Though we are under the impression that Dr. Rollins fell in love with Charlotte when he became her doctor, that might not be the case at all. Perhaps the truth is that Dr. Rollins only became Charlotte's doctor because he was in love with her. The simplest explanation was that Dr. Rollins was once a patient at Radley as well, and that he got out around the time Charlotte started her A game. After all, if he was a good guy dragged down by Charlotte, he wouldn't need that fake identity in the first place — he wouldn't have anything to hide. If he was a patient at Radley, using a new name would give him access to Charlotte when she was recovering in Welby State Psychiatric Hospital for years — they might not let one of Charlotte's Radley pals in to visit her, but they definitely would welcome a doctor committed to getting Charlotte better.

I can't wait until we uncover the truth about who Dr. Rollins is, but it might have to wait. The next step for the Liars will be burying Dr. Rollins body, and making sure they don't get caught for their latest crime.