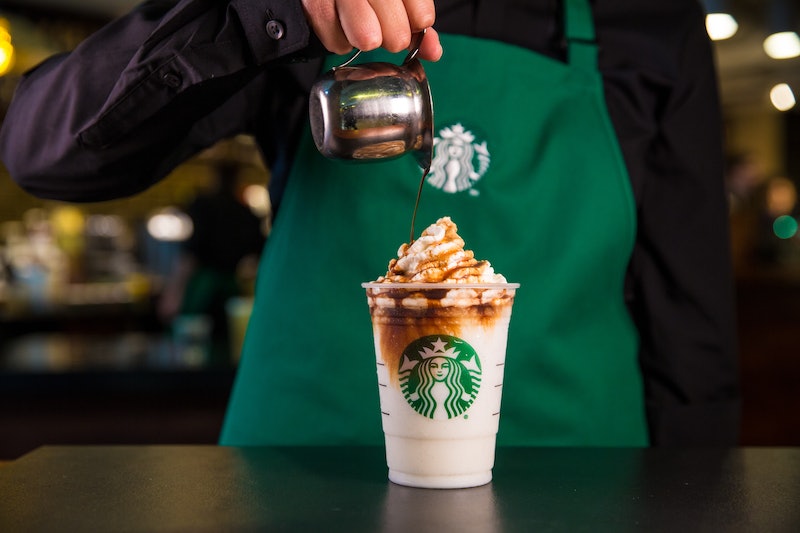 As an avid Starbucks fan all about that Frapp life, I will never say no to a delicious S'mores Frappuccino pushed in my direction — but even I like to mix it up a little bit. Enter the new Starbucks Affogato-Style Frappuccino. I know, it kind of sounds like a mouthful, doesn't it? But this new take on the frosty treat isn't quite like the other Frappuccinos you may have crossed paths with recently, and that's definitely not a bad thing. It just feels so fancy, you guys.

Before we get into details here, let's quickly go over what "affogato-style" even means, because it's not something everyone might immediately be familiar with. Basically, an affogato is a classic Italian dessert that consists of vanilla gelato (or ice cream, if that's more your thing) topped with a shot of espresso. It's a favorite for a reason — the cold and hot textures put your senses on high alert, and there's nothing like creamy vanilla bean to help curb the sharp bite of espresso. If it sounds heavenly, well, that's because it is.

As for the Starbucks version? Well, given what we've just learned about affogatos, it's essentially the exact same concept. Inspired by the dessert, a shot of Starbucks espresso gets poured over any Frappuccino of your choosing to create, as Starbucks puts it, "creamy pockets of coffee and beautiful marbling." Need a visual on that one? Feast your eyes, my friends:

Starbucks is offering up the affogato in three different flavors, Vanilla Bean (which I just showed you), Caramel, and Mocha, but you can ask for any Frappuccino to be served affogato-style if you're looking for an extra shot of espresso to boost your day, and your barista will know exactly what to do. I personally think a White Chocolate Mocha Affogato-Style Frappuccino sounds like the most decadent thing a human could possibly experience down here on Earth, but feel free to get creative with your Frapp.

As you may have already gathered, no matter what Starbucks Frapp you order up affogato-style, it is going to contain some caffeine. A shot of espresso on its own contains 75 mg of caffeine, and you are adding that onto a Frappuccino that might have already contained caffeine in the first place (for example, a tall Affogato-Style Mocha Frappuccino has 130 mg of caffeine — 75 from the espresso, and 55 mg in the Frapp itself). So if it's a little afternoon boost you crave, this dessert-like drink is for you.

The Affogato-Style Frappuccinos are available in stores starting July 7 and should last throughout the summer, so go forth and order wisely. A tall will set you back between $4.25 and $4.75, depending on where you live, but then again, happiness is priceless.