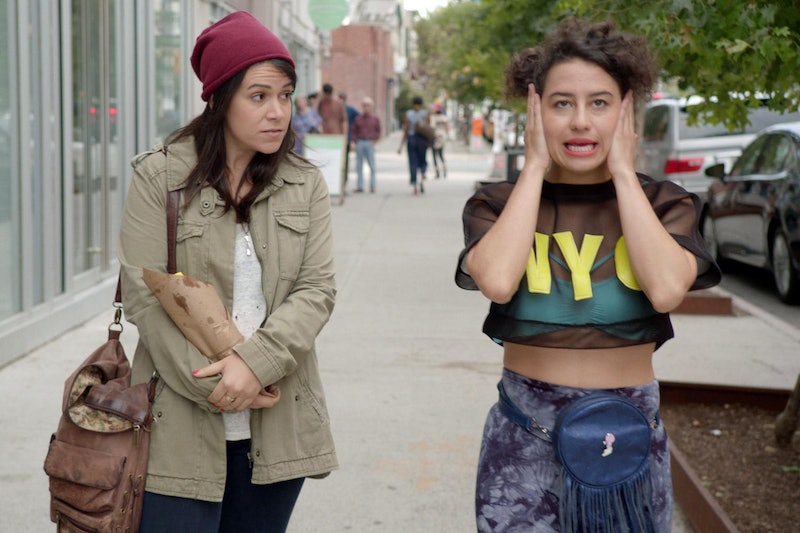 I've been a gentrifier for as long as I've been in Brooklyn. I've lived predominantly in Clinton Hill, Prospect Heights, and now, Crown Heights, one of the most rapidly gentrifying neighborhoods in Brooklyn. I frequent the independent coffee shops, and the new, trendy restaurants that have popped up in place of the local businesses I haven't even been around long enough to miss. I am one of a handful of white people in my building, which is filled with long-term, mostly Caribbean- and African-American residents. When I first lived in Crown Heights in 2008, someone once told me to "go home, white girl," but no one says anything like that to me now. I am simply one of many, rapidly populating every corner.

But I've never forgotten that catcall, and have since tried to minimize my presence in my building and neighborhood. I knew that gentrification is displacing longterm residents of Brooklyn — many of them elderly people of color — so that people like me can live in a cool, "diverse" neighborhood. And I've felt badly about it. I kept my head down when I passed my neighbors and tried to be aware of my role in this with humility. But just keeping my head down isn't helping anyone or my neighborhood, either.

When a quiz on how you know whether you're a gentrifier went viral this week, I was reminded of my place in my neighborhood. I thought that there had to be a way to be a gentrifier and not feel like a total asshole — and more importantly, to help. To understand what I could do, I spoke with Public Advocate Letitia James, as well as Leo Goldberg, a housing advocate who studied displacement in New York City as part of his masters in City Planning at MIT. Here were their tips.

1. Know What Gentrification Actually Is

"When 'urban renewal' of lower class neighborhoods with condos attracts yuppie tenants, driving up rents and driving out long time, lower income residents. It often begins with influxes of local artists looking for a cheap place to live, giving the neighborhood a bohemian flair. This hip reputation attracts yuppies who want to live in such an atmosphere, driving out the lower income artists and lower income residents, often ethnic/racial minorities, changing the social character of the neighborhood ... it also involves the 'yuppification' of local businesses; shops catering to yuppie tastes like sushi restaurants ... come to replace local businesses displaced by higher rents."

That's a pretty good definition. But gentrification is not just a bunch of trendy cafes and young white people invading a community of color. It is a structural process that everyone is a part of — not some passive phenomenon. If you're young and white, Goldberg says, you're like the "pool cue" of gentrification, and real estate players are using you to win the game, so to speak. "Young, college-educated newcomers to low-income neighborhoods are certainly part of gentrification, but they’re not the driving force behind it. Rather than just feeling guilty or not caring, gentrifiers can educate themselves on the real forces powering neighborhood change — the investors, developers, and brokers whose actions displace poor and often non-white neighborhood residents so they can cash in on the demand for housing from gentrifiers," he tells Bustle.

You also need context, and "you should also learn about the rich history of your neighborhood," James adds. I recommend checking out WNYC's new podcast "There Goes The Neighborhood," which does an excellent job investigating the history and current state of gentrification in New York City (but will teach you a lot about gentrification, no matter where you are).

2. Know How People Are Getting Pushed Out Of Their Homes

In rent- controlled and stabilized buildings, many long time tenants — many of whom are elderly — report that they are being neglected and even harassed by management in an effort to push them to move so that they can be replaced by younger (often white) tenants who are able to pay an astronomical amount more per month. Landlords may try to claim tenants didn't pay their rent, or refuse to fix inhospitable conditions.

"[Bad landlords] are focusing on the weakest link; long-term residents who happen to be senior citizens," James claims. "They overcharge them, they don't fix conditions in their buildings."

3. Background Check Your Apartment & Landlord Before You Move

If you are young and privileged, where you yourself choose to live can also have an impact in shaping how ethically the market operates.

"Remember you are the reason landlords are evicting people, whether it is directly or indirectly through something like a buy-out, they do that in order to get young people who will spend money – so, your choices as a consumer, and where you choose to live, impacts their ability to do that," Goldberg says. "If we were all perfectly knowledgeable about landlords, we wouldn't move to a terrible landlord or racist landlord, and then that landlord wouldn't have an economic incentive to empty out his building."

Remember: you are the pool cue in the game of gentrification, and you can help drive the real estate market to a more ethical place. A background check of your apartment before you sign is also a good way to avoid getting price-gouged, or living in a building managed by unethical landlords. The City’s Department of Housing Preservation and Development (HPD) has a simple portal online where you can put in a building address and it will tell you the building code violations, tenant complaints, and whether tenants and the landlord are in housing court, among other things. If you're using the State Department of Housing website, you can also find out your rent history to ensure you aren't being ripped off. Goldberg notes that in New York City, if you’re in a building with more than six units and built before 1974, your unit is probably actually rent-stabilized, or was until recently. You should also check out the Worst Landlords Watchlist if you're in NYC, and make sure the building you're about to sign with isn't managed by someone on it. Across the country, you can find similar resources on your city and state's housing department websites.

While using a no-fee broker might seem like a great thing, Goldberg adds they can actually be an indication that something shady is going on. "It means the broker is getting their fee from the landlord instead of from you, which is great — except in some cases, it means they are working closely together to make sure these apartments are freed up and the broker can bring new tenants." If you're going to use a no-fee broker, you'd better look up the building and unit, at the very least.

5. Get On Board With Organizing

The best thing you can do, especially if you find yourself in a shady building, is to get involved with organizing and advocacy. If you're a writer, write about what's happening in your building or neighborhood. If you're a lawyer, offer some pro-bono services. Or, just show up. Attend community board meetings and any organizational meetings that are happening in your building. And make sure to check your privilege — you may have opinions, but it's important to listen, first and foremost.

While showing up to protest, voting, and attending meetings are all extremely important, Goldberg notes that "Organizing can also just mean informing people of useful information, being informed yourself, and passing it on in a modest way." Like, say, sending this article to your friends.

6. Talk To Your Neighbors

When I first moved into my apartment, I kept my head down. I realized I was one of the few white people in my building, and as I saw more and more of us move in over the course of just one year, I felt worse and worse about it. Because everyone else in my building seems to have been there forever and knows each other, I thought the best thing I could do was to minimize my presence. I also assumed my neighbors hated me for being a gentrifier.

When I attended a demonstration at my building, I realized just how wrong I was — everyone was beyond friendly and welcoming to me, happy to have me as an ally. Since then, I've followed James' advice that "saying hello can go a long way," and have made it a point to greet my neighbors, to sometimes check in on how they are doing, and see if I might be able to help. "Being invisible isn't useful," James adds. "The best way to break down barriers is to start with a simple hello. Ask your elderly neighbor if she needs anything from the grocery store. Learn about the history of the neighborhood from them."

7. Think About Where You Spend & Save Your Money

Obviously, gentrification isn't just about your apartment building — it's about your neighborhood. If you live in a rapidly-gentrifying neighborhood like I do, it's important to not only frequent the new, trendy places, but to also seek out the markets and restaurants that have been there for years, or that are owned by people who don't just come from your demographic.

"There is no rent control for commercial spaces, and the rent is going to keep going up. So where your money is spent is important,” Goldberg says.

If you have your money in a big bank, you can also consider putting your money in a local credit union, since some of them even reinvest your money in the neighborhood by lending to small businesses and supporting housing counseling.

8. Report Violations To The City & Be Politically Active

Yes, calling 311, or whatever your city's number for complaints is, can actually matter a lot. If enough people call 311, the city will send an inspector, and that causes administrative processes that are good for tenants to be set in motion.

Real change and regulations will also come from lawmakers — but we have our work cut out for us. In New York, the real estate lobby is actually the single largest donor to state-level politicians, which means representatives may be under pressure to follow their interests unless their constituents pressure them to do otherwise. You can also be politically active by sending letters, going to protests, attending meetings, signing petitions, and of course, voting in your local and state elections.

9. Know That "Checking Your Privilege" Doesn't Absolve You

Just because you've resolved to be friendly, that doesn't mean you don't need to also check your privilege as a gentrifier — just don't let checking your privilege paralyze you or absolve you from actually doing something, either. Obviously, it’s important not to be a jerk, but if you only think about your behavior, you’re still making gentrification all about you. It’s best to focus your energy, James says, on actually being an activist. So check your privilege — but don't make it passive. Ask your elderly neighbor how the landlord is treating her. See how you can help advocate for people in your building who are getting pushed out. Because as James likes to put it, "instead of gentrification, we need to move towards unification."