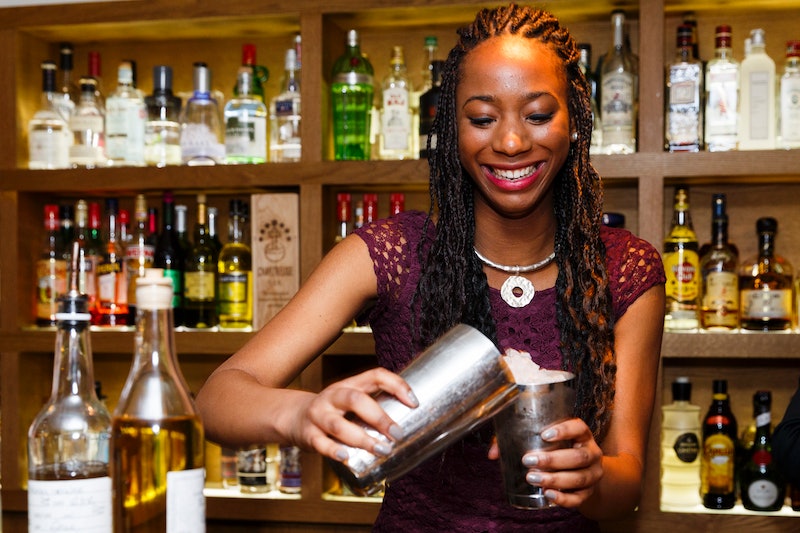 The law currently on the books allows for anyone over the age of 21 to enjoy a nice cocktail or beer, but once upon a time in the old US of A, the act of imbibing alcohol—and the establishments wherein one could do so—were considered the domain of men, despite women’s varied and historic contribution to the tradition of drinking intoxicating beverages. After the end of Prohibition, 26 states passed laws against women tending bar. In 1945, Michigan passed a law making it illegal for a woman to tend bar unless she was the wife or daughter of the bar’s owner. This and similar laws were upheld until as late as the 1970s.

What follows are 10 juicy tidbits about women’s longstanding relationship with booze, culled from Jeanette Hurt’s forthcoming book, Drink like a Woman: Shake. Stir. Conquer. Repeat. This highly gift-able book mixes (see what I did there?) feminist history with over seventy classic cocktail recipes, many renamed in honor of noteworthy women in history: Frida Kahlua, Zeldapolitan, Bronte’s Brew, Tubmantini Curie Royale, and Amelia Takes Flight, to name a few. (The Suzy B’s Virgin Voter, named after abolitionist and temperance advocate Susan B. Anthony, is alcohol-free).

1. A Woman Invented The First Method Of Distilling Alcohol.

Between 1 and 3 AD, Egyptian alchemist Maria the Jewess invented the alembic still. This was the first device used to distill spirits.

2. Nancy Morgan Hart Dressed As A Man To Spy On British soldiers During The Civil War.

“When six soldiers—presumably either Tories or British enlisted men—came to her farm demanding food, she didn’t just serve them dinner; she also poured homemade corn whiskey and ensured they became inebriated," Hart writes.

Once the men were wasted and presumably passed out, Hart shot them with their own rifles.

3. Veuve Clicquot Is Named After The Woman Who Revolutionized The Brand.

Veuve Clicquot is named after Madame Clicquot, who took over the family champagne business when her husband died. Madame developed a new technique of twisting the bottles upside down to remove the yeast.

4. Women Used "Side Entrances" To Drink At Bars.

During the 19th century, women had to use side doors to enter bars. “In Wisconsin, historic Germanic taverns still boast these side entrances, which opened into small rooms that were known as ladies’ parlors," Hart writes. In the privacy of these parlors, women did their own drinking—and sometimes smoked cigars.

In the 1830’s, “women’s tonics” were a popular means of relieving “menstrual symptoms," according to Hart. The tonics were pioneered by abolitionist Lydia Pinkham and probably cured more than just cramps, but may have caused a few headaches, if you know what I mean.

Ada Coleman was the first celebrity female mixologist, who began tending bar at a swanky Chicago hotel in 1899. “She was so popular that she was then hired away by The Savoy and elevated to head bartender," Hart writes. Coleman and her co-bartender Ruth Burgess concocted cocktails for the likes of Mark Twain, actor Sir Charles Henry Hawtrey and the Prince of Wales.

7. One Of The Most Notorious Prohibition-Era Smugglers Was A Woman.

Prohibition-era sensation Gertrude “Cleo” Lythgoe was known as the “Queen of the Bahamas.” She legally exported rum from the Bahamas to London until realizing she could make more money by operating outside the law. Lythgoe was known to carry a pistol. She was charged in New Orleans with smuggling, but was never convicted.

8. The Powder Room Was Invented For Female Bar-Goers.

As 1920’s flappers shirked convention and began frequenting bars, it became necessary for speakeasys to provide them with a bathroom. Thus the powder room was born, often taking the form of a converted broom closet or other “tucked-away places.”

9. The White Mouse Is Named After WWII Renegade Nancy Wake.

Nancy Wake was a “World War II renegade and hero. A leading figure of the French resistance, she was the Allies’ most decorated servicewoman, and a recipient of the U.S. Presidential Medal of Freedom.” She managed to evade capture by the Nazis, who coined her nickname “White Mouse.” Wake died at age 98. The White Mouse is a mixture of Saffron gin, lemon juice, honey, and Champagne, garnished with star anise. Yum.

10. This Bartender Found A Unique Use For Bras

Longtime bartender Marcy Skowronski is 90 years old and still serving drinks at Holler House in Milwaukee, a spot known for its unusual décor: autographed bras hang from the bar’s ceiling, a tradition Skowronski and her friends started in the 60’s. When city inspectors said the bras were a fire hazard and had to be removed, Skowronski successfully protested the takedown. The bra décor lives on to this day so if you’re ever in Milwaukee, feel free to donate your own over-the-shoulder-boulder-holder.

Want more boozy-feminist trivia? Want to try the White Mouse? Or how about a Jane Austen's Zombie? Drink like a Woman is slated for release on October 25, 2016 from Seal Press.