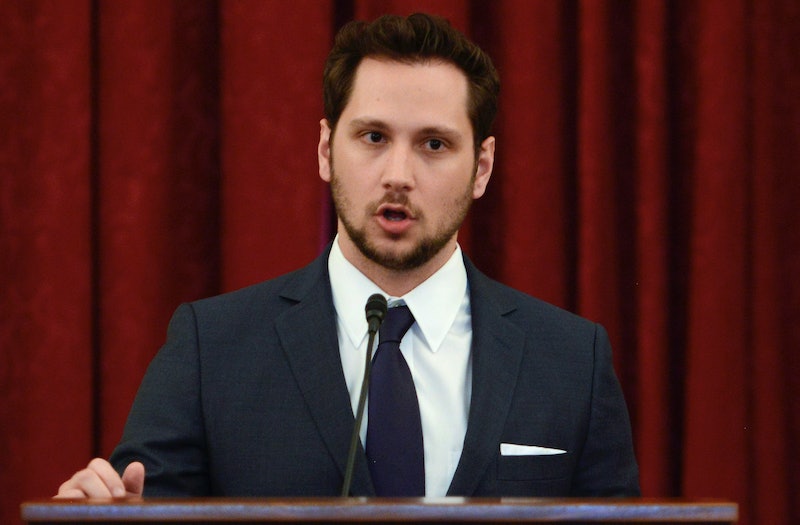 While Orange Is The New Black fans are deciding what to make of Season 4's tumultuous finale, Matt McGorry, aka C.O. Bennett, still has some words for his character's sudden departure during Season 3. "Not cool, dude," McGorry tells Bustle, referencing Bennett's decision to have an affair with the incarcerated Daya, let another officer take the heat when she found herself pregnant with his child, and then run from the situation entirely. The character hasn't been on the show since his heartbreaking exit — but could Bennett ever return to OITNB ? Don't rule it out.

"At this point, I don't know what will happen next," McGorry says, adding, "I wish I could give you more information, but I don't know anything at this point." That may not much help to fans hoping for Bennett to make a re-appearance, but it's notable that the actor doesn't say never when it comes to his character returning to Litchfield one day. Still, McGorry, at least, is OK with the way things turned out for Bennett. What he did to Daya was hardly a courageous sequence of events, but McGorry says that it might've been the only way to end their relationship.The power dynamics between correctional officers and those in prison cannot allow for equal consent, meaning that Bennett and Daya's sweet-looking affair was actually highly problematic. "Considering what their story actually looked like," McGorry says, "it was probably the only way it could have ended."

In the meantime, the actor is pleased that he had the opportunity to do a flashback episode before his departure. McGorry knew he was being written out of the show, but he was pleasantly surprised to find Bennett's backstory in Season 3's script. "It was better than I could have imagined," he says of the episode, which featured scenes of Bennett's pre-Litchfield military service in the Middle East and a playful homage to Gwen Stefani.

Still, it was sad to see Bennett go so suddenly, leaving Daya heartbroken and in the lurch, with their baby possibly ending up in social services. McGorry says that he watched the events of this past season, in which Daya struggled to find out what happened to their child, like any other fan would. Now, all he (and other viewers) can do is wait and see what happens next; OITNB has at least three more seasons to go, so there's plenty of time for things to change and for Bennett to possibly make his return.