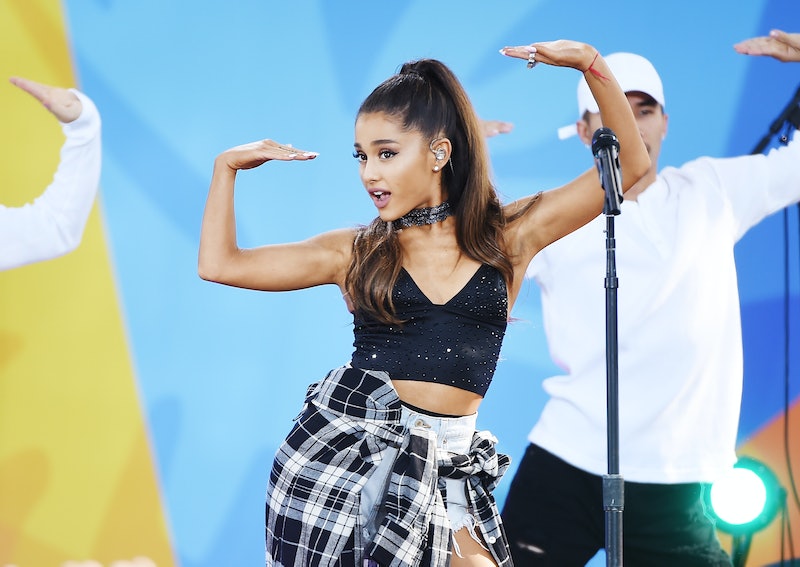 Ariana Grande may be your confidence idol, but her latest television role will be worlds away from the "Focus" singer's usual brand of high-ponytail confidence. According to a new report from Entertainment Weekly, the pop star — who previously appeared on Fox's Scream Queens as the ever-ditzy Chanel #2 — is now moving into live television musicals. Grande will star as Penny Pingleton in NBC's Hairspray Live! , and if anyone can kill the part of the musical's most adorkable character, it's Grande. The pop princess joins Broadway veterans like Kristin Chenoweth, Jennifer Hudson, and Harvey Fierstein in the televised event, which will premiere on December 7, 2016. That might seem like it's soon, but don't worry — this girl won't have a ton of catching up to do. Though you may know her better for her pop tunes, this star is no stranger to the stage, and Hairspray Live! should take Grande back to her roots.

Though it may seem like Grande was born to be a miniskirt-donning pop princess, the "Dangerous Woman" singer actually got her start in musicals. According to her interview with Complex in 2013, Grande, a Boca Raton, Florida native, got the performing bug when she joined community theater. Grande told Complex that her very first role was as the titular character in the musical Annie , and that after the initial play, she "just never stopped [performing.]" You can check out her first performance below:

Later, Grande moved on to a bigger stage — Broadway. The triple threat was cast in the tween coming-of-age musical 13 , in which she shared the stage with her soon-to-be Victorious cast mate Elizabeth Gillies. According to Grande's Complex interview, we can thank 13 for giving the pop star the crazy-insane range she's famous for:

I was just in the ensemble, I barely had any lines, but they gave me all the highest harmonies. I was belting my ass of the whole time and it was incredibly challenging and wonderful. My favorite thing about doing 13 was that Jason Robert Brown, who wrote the score, loved to push people to their limits vocally and I loved that. My range expanded because of 13.

It looks like Grande will be returning to her roots with Hairspray Live!. I have no doubt that she'll continue to slay on this stage, just as she has on so many others.