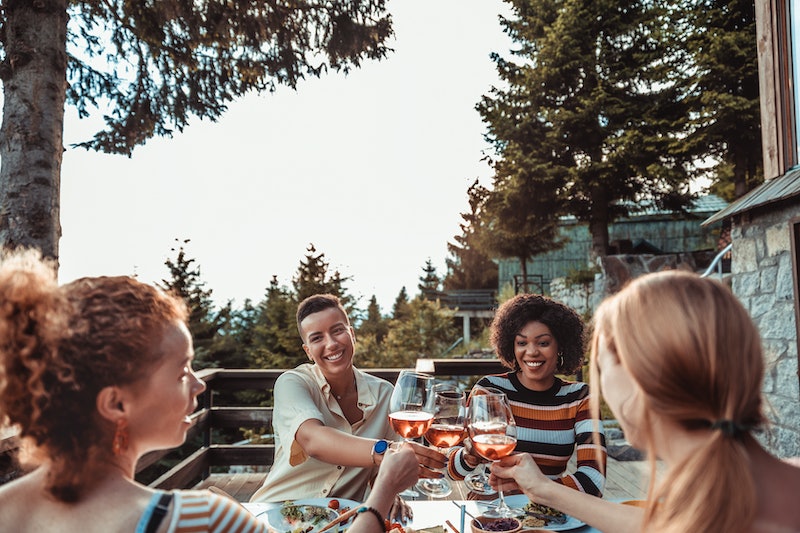 When you’re younger, making friends is easy. You just go up to someone, say hi, and ask them to be your friend. Even in college, we’re set up to meet new people either through classes or school events or in dorms or at parties or… You get the idea. But making friends as an adult is hard. It’s not really socially acceptable anymore to just walk up to someone and say you want to be friends with them (although, confession: I totally still do this) and we don’t have activities other than work where we meet people we could hang out with.

Friends from college or your hometown are great, but there’s really something to be said for a friend who didn’t know you during your misguided punk rock stage or one who never saw you throw up after a frat party. A lot of people give up on making friends as they get older because the avenues that they’ve become accustomed to just aren’t there anymore and that can create stagnation and boredom. Nothing feels better than making a new friends — but how do you do it?

Believe it or not, it really is possible to make new friends as an adult — it just takes a little more creativity and bit more courage than it did when you were still in school. Because I’ve spent the past five years moving to new country every three months to a year, I’ve gotten really good at making new friends. The biggest thing that has helped me is actually a little reminder that I repeat in my head when I’m feeling nervous: Everyone is a little bit lonely. Like picturing everyone naked when I’m doing some public speaking, it reminds me that other people are vulnerable too. With that in mind, here are seven moves that I’ve found are great for making friends as an adult.

1. Find People Who Already Do What You Want To Do

I’m really into sewing and textiles, so one of the ways I’ve made friends recently is by finding women who have cool clothing companies. So, for example, when I was living in Antigua, Guatemala, I heard about a boot company called Uxibal, which uses Mayan fabrics to create high fashion shoes and boots. I went and found the shop, chatted with the woman who runs the company, thought she was cool, and asked her to hang out again another time. We ended up being close for the rest of my time in Guatemala and are still in touch today.

So what’s your thing? It’s probably not textiles, but I bet there’s something you’re really interested in that you’d like to learn more about. Seek out someone who is already doing that thing — whether it’s running at startup or creating jams or learning how to code — and reach out! People love to talk about what they do and most people love to teach, at least a little bit. Once you’ve made that connection, it’s an easy next step to hanging out socially.

2. Set Up A Group Or Activity In Your Neighborhood

Another way to meet people who are into the same things that you are is by setting up a group or activity at a local community center — or even in your house, if you feel comfortable doing that.

When I was living in Brooklyn, I teamed up with a local arts center to create a weekly sewing group. We went around and plastered the neighborhood haunts with signs; told everyone we talked to what was up; and then got sewing. I met some awesome people in the ‘hood that way and had a set weekly social event that fed my extroverted needs.

OK, bear with me on this one for a second. One of the first things I do before I even land in a new country is join all of the Facebook groups. Obviously Facebook is not the same as meeting people IRL but it’s a great way to find people who have the same interests as you. One of the hardest things about making friends as an adult is that initial ice breaker. Facebook lets you connect with likeminded people without the scary social risk that approaching someone, say, at an event brings. It’s also a great way drum up interest for an event you’re throwing or for joining events that are happening in your area.

4. Take A Fitness Or Dance Class

This is related the group or activity one but I think physical stuff is specific enough to warrant a category of its own. It’s also probably more accessible to most folks than other types of groups, as basically everywhere has gyms. Pick a class, go regularly, scope out your fellow class-takers, and summon that bit of courage that you need to go up to one and say, “Hi.” Or, even better, comment on something that happened during class. It’s an automatic, easy icebreaker.

Networking events don’t have to be just for work. I go all the time with the intention of meeting people to hang out, mainly because the situation is already set up so that chatting with people is easy. Bonus: If you go with the intention of learning more about people so that they can be potential friends, you’ll actually be doing better networking. The best networkers are genuinely interested in the people around them and that’s what you’re exhibiting when you’re looking for friends.

But for real though. Talk to strangers. Compliment someone on their shoes or dress. Chat on the bus. Ask your barista a question. The more you put yourself out there, the more likely you are to meet someone you vibe with. As Basil King wrote, “Be bold and mighty forces will come to your aid.”

You know you want to learn how to cook Vietnamese food. Or perfect your lasagna. Or create craft cocktails. (Not technically cooking, but it's in the same general category, right?) Cooking classes are a great way to learn a new skill while chatting it up with new people. Do a little googling and see if there's one in your town!