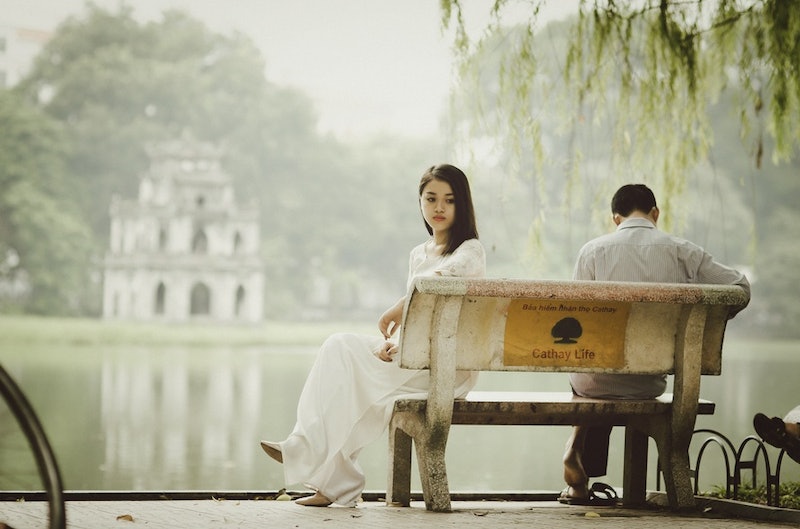 It's never easy to admit when your romantic relationship is over. You think you can work it out, but time after time, nothing has changed and the same issues remain between you and your SO. You ignore the signs that your relationship is not going to last in hopes that something will be different. But you haven't seen an improvement and you think it might be time to say goodbye for good.

The thing is, though, that ignoring the signs that your relationship isn't going to last won't change anything. And it can be even worse when you and your SO do try to work on things, but something still doesn't feel right. According to Psychology Today, author of Boot Camp Therapy: Action-Oriented Brief Approaches to Anxiety, Anger & Depression Robert Taibbi, L.C.S.W., "You argue all the time about this small stuff, and occasionally bigger stuff, but you know the drill: Regardless of what you say or what the topic is, you know how this will end. At best, it goes nowhere; at worse, it isn’t pretty. An increased sensitivity to trivial stuff is your brain trying to connect the dots between your emotions and external behaviors. You feel disconnected, maybe on the verge of leaving, and so, thanks to the power of cognitive dissonance, you need to bring your thoughts and feelings in line."

While saying goodbye to a relationship, especially a LTR, is not ideal, it doesn't make sense trying to force something when you know your gut is telling you to let it go. But if you're not 100 percent sure if your relationship has run its course or not, here are 11 signs that show prove your relationship might not last and that it might be time to pull the plug.

Don't view arguing with your partner as a bad thing. It means that you're not afraid to be honest with them and are trying to work on things. But if you're fighting just to argue, well, that's a different story. "If you've been fighting, or dread fighting, moving into a phase of not talking meaningfully at all can feel like a relief — but it could be a sign that you've both given up on being understood. When this happens, divorce is often the next step if you don't get counseling and figure out how to talk to each other without fighting," says psychotherapist Tina B. Tessina PhD in an interview with Bustle over email.

2. You're Not Having Sex

Being intimate with your partner is a great way to feel connected with them. And when that's no longer in the picture, you may feel distant and unloved. "While sex in long-term relationships isn't the easy, self-igniting excitement it was in the beginning, it's still the heartbeat of your relationship. If you haven't learned how to keep your sex life alive, and it sputters out, you open a wound in the relationship that invites an affair. If you haven't had sex with your partner in a while, start talking about what's not working — or divorce could be the solution," says Tessina.

3. You're Parents, Not Partners

"If you have focused so much on being a family and raising your kids, and let your couple relationship go, you may find that you've lost your couple connection completely. This is why so many couples break up as soon as the kids are grown (or even before). Your [husband] and wife relationship is vital — it's the foundation your family is built on. Don't get so into your role as parents that you forget to be partners," says Tessina. Just because you have kids, doesn't mean your marriage needs to fall by the wayside. It's important to take care of your partner, so you can build a strong foundation for your kids.

4. You Or Your Partner Uses The Silent Treatment

"The silent treatment functions to keep the receiver in suspense of what will happen, and unsure of 'what they did wrong', and 'how bad it is.' It is a way of controlling the other person as a precursor to abuse," says relationship psychotherapist Dr. Fran Walfish in an interview with Bustle over email. Sometimes couples use this tactic to gain control of the situation and to have more power, but this isn't healthy. The only way you'll have a happy relationship is by simply letting go of your ego and talking things out.

5. You Or Partner Constantly Corrects Each Other

There's no good reason why a couple needs to be correcting each other constantly. It can make a partner feel belittled or even stupid if it happens all the time. "Disputing or correcting someone on points irrelevant to the main point being discussed. The constant correcting keeps the [SO] on top and his subject in a one-down position," says Walfish.

6. You're Not Being Honest

7. Your Conflicts Include Criticism & Contempt

According to Prevention, you and your partner might not last long if you're constantly criticize them. This can make them feel inferior. Saying phrases like, "Why do I have to do everything around here? You do nothing to help out," is a form of contempt and can tear the relationship apart.

8. You Don't Trust Each Other

Let be real: If you don't have trust in your relationship, then it's most likely not going to work out, especially if you or your SO doesn't want to work on fixing the problem. According to Psychology Today, David Bedrick, J.D., Dipl. PW, said, "The first step is to become fully aware of the nature and extent of the hurt you feel. If your hurt is dismissed, minimized, or denied, by yourself or others, then the wound is likely to fester and it is unlikely trust will be repaired. To ensure this does not happen, ask yourself the following questions: How deep is the hurt/pain you suffer? Does the betrayal trigger earlier hurts exacerbating the pain and suffering? Does the hurt linger for days, months, or even years?"

9. You're Not Empathetic With Each Other

It can be hard to make a relationship last if you don't have any empathy for your partner. Not expressing empathy can make your SO feel excluded and under appreciated. According to Psychology Today, psychologist Jeffrey Bernstein, Ph.D., said, "Empathy, again, is the power way to understand and imagine another person's feelings. Sympathy can be draining, but empathy cannot. Sympathy leads us to feel that we have to do something. Empathy empowers us by providing a special sense of togetherness and connection that is formed by powerful, mutual identification for the one you love."

10. You Don't Talk About The Future

Unless you've only been dating your partner for a short time, it's important to communicate about the future of your relationship. If you're pushing your SO for marriage, but they don't even want to talk about it, then that might be a red flag that your partner doesn't know how to communicate. Or they just don't see the relationship going anywhere. According to eHarmony, if you find that this topic is troubling, don't force it. Try to keep the conversation light and listen instead of judge when your partner is speaking.

11. Your Emotional Needs Aren't Being Met

While not every relationship is perfect, it's important to know what makes you and your partner feel most loved. And if your partner is not willing to satisfy those needs, then it could mean that your relationship is doomed. According to Psychology Today, Steven Stosny, Ph.D., said, "The perception of need begins with a rise in emotional intensity—you feel more strongly about doing this or having that. As the intensity increases, it can feel like you 'need' to do or have it, for one compelling reason: It’s the same emotional process as biological need. When emotion suddenly rises, your brain confuses preferences and desires with biological needs."

If you find yourself experiencing some of these signs in your relationship, don't worry. There are ways to turn your relationship around. Talk with your partner about why you're not happy and determine if these issues can be fixed. As long as you both are willing to communicate and listen, then anything is possible.