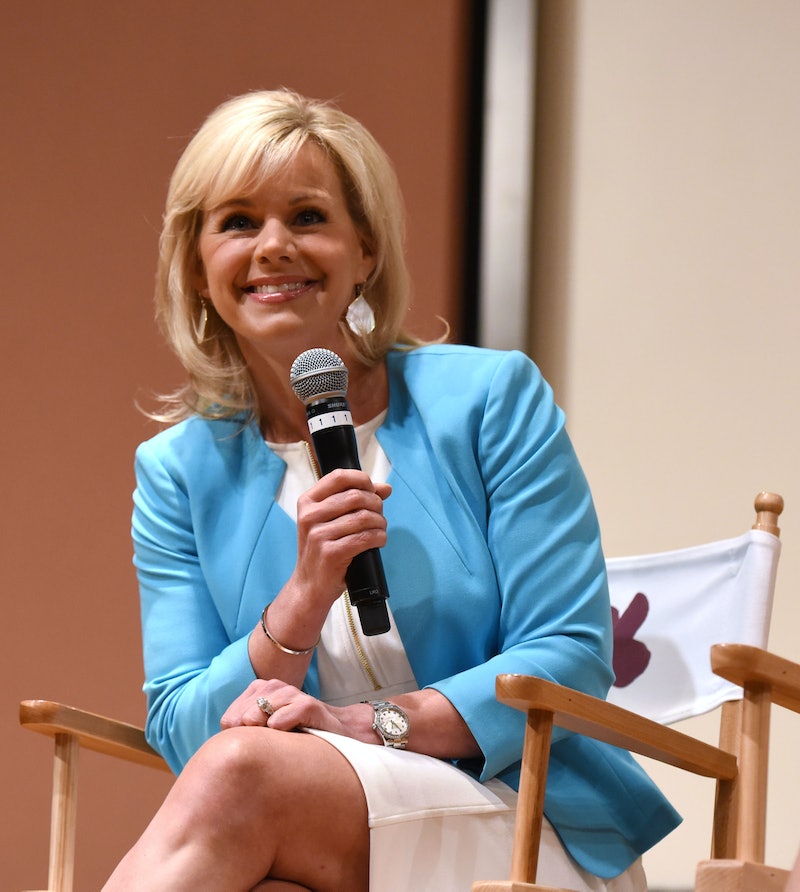 A mashup of clips from the morning news show Fox & Friends gives a startling look at what a Fox News anchor — who is now suing her former employer for sexual harassment — once called a normal day at work. In the two-minute long video, put together by Bloomberg Politics, former Fox & Friends co-hosts Steve Doocy, Eric Bolling, and Brian Kilmeade repeatedly discuss how attractive their female colleague is while on air. The video followed news that Gretchen Carlson is suing Fox News for sexual harassment following the cable news network's decision not to renew her contract.

In a lawsuit filed with the Superior Court of New Jersey on Wednesday, Carlson alleged she was removed as a co-host of the network's successful morning show Fox & Friends in 2013 and given a lower-profile afternoon slot after voicing objections to how she was treated by her male co-hosts. After roughly two years hosting The Real Story with Gretchen Carlson, the veteran Fox News anchor was released from the network last month.

While Carlson claimed she was ultimately fired by the network because "she refused sexual advances" from Fox News CEO Roger Ailes and "complained about severe and pervasive sexual harassment," Fox has denied the allegations in a statement provided to Bustle and asserted Carlson's contract was not renewed because "her disappointingly low ratings were dragging down the afternoon lineup."

"This defamatory lawsuit is not only offensive, it is wholly without merit and will be defended vigorously," Ailes said in a statement, later calling Carlson's allegations "false."

"This is a retaliatory suit for the network’s decision not to renew her [Carlson’s] contract," Ailes said. "When Fox News did not commence any negotiations to renew her contract, Ms. Carlson became aware that her career with the network was likely over and conveniently began to pursue a lawsuit."

In a statement released Thursday, however, Carlson’s lawyers pushed back against the cable network's claim Carlson brought in low ratings. "The publicly available ratings confirm the allegation in the Complaint that at the time of her termination Gretchen's total viewership was up 33 percent year to date and up 23 percent in the key demographic," Nancy Erika Smith and Martin Hyman, Carlson's lawyers, said. "After her firing from Fox & Friends for complaining about discrimination, Gretchen was moved to a challenging time slot and denied support and promotion. Despite this, she succeeded and was the number one cable news show in her time slot in total viewers."

A new video by Bloomberg Politics appears to show Carlson may indeed have been subjected to repeated harassment while hosting Fox & Friends, as her male co-hosts discussed her physical appearance and clothing with startling regularity. In early clips, Carlson is called "cute," "beautiful," and "gorgeous" by her male co-hosts who also often comment on how she looks in whatever dress or skirt she is wearing. In one clip, Kilmeade declared, "Gretchen is really too hot." In another, Carlson is asked, "Doesn't waxing hurt?" by one of her male co-hosts. In yet another clip, Carlson joked, "HR is on the phone because you called me a skirt." Her co-hosts laughed it off.

While Bloomberg's mashup video certainly won't give first-time viewers of the show a good first impression of Fox & Friends, Carlson once defended her male co-hosts on the air, saying, "We're kidding" when news outlets claimed she walked off the show in protest of Kilmeade's "sexist commentary" while filming an episode in 2012. It appears now, however, that Carlson may have championed her male colleagues due to pressure from the network, as she claimed in her lawsuit she was subjected to "a pattern and practice of severe and pervasive sexual harassment" from at least one of her Fox & Friends co-hosts.

Interestingly, in an op-ed for the Huffington Post last year, Carlson analyzed the issue of sexual harassment and why women continue to feel reluctant to come forward:

Most professional women I know have experienced sexual harassment. So have I — a few times — and I never talked about it until now. If that seems surprising, it shouldn't be. I've always considered myself a strong woman, not afraid to stand up for myself, but in the face of sexual harassment I was silent. ... We're unfortunately not at a place where we can say absolutely that a woman who is harassed will be protected from repercussions if she tells. ... I sometimes feel guilty about my trepidation. Perhaps I could have moved the conversation forward if I had come forth.

The Bloomberg mashup video, as well as Carlson's statements and allegations against Fox News, show that perhaps for women, objectification is a very real, very unwelcome part of the job. But just because it seems "normal" or "jovial" doesn't mean it's not a serious burden and threat against women in these professional positions.