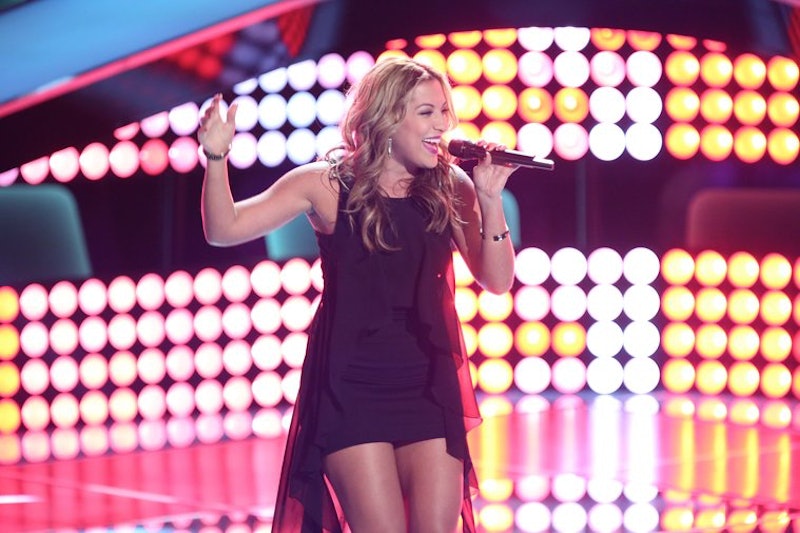 It's Monday night. You know what that means? Another episode of The Voice. A two-hour episode of The Voice. 11 more performances (plus a handful of other audition clips). YES. Love me some Blind Auditions/going on this journey with Shakira, Usher, Adam Levine, and Blake Shelton. How many people are on each team as of this very moment? Uh... at least five? I've lost count. Sorry.

We're three episodes in, and nearly everyone has been awesome. So much talent, I tell ya. Even those who didn't receive any chair turns were awesome. For example, I was genuinely surprised when no one hit their button for Allison Bray. I thought she was an obvious chair turn, but there's just SO MUCH TALENT, I TELL YA.

Here are my top five from the night:

He has such a sweet yet rich voice. For as high as it is, it never struck me as nasally. His tone is really, really unique. I dig it a lot. His voice seems like it could be versatile, genre-wise, and that is always fun.

All four coaches turned, because dude is good.

What did Blake actually say? Exactly what Adam said he was going to say. Such BFFs, Blake and Adam. They know each other so well/they've been doing this show a while.

DeShawn Washington—“Twisting the Night Away”

Well, DeShawn is freakin’ adorabs. He sings made up songs while he goes fishing, for heaven’s sake. He has a really great, soulful voice. And while he sang, he twisted and snapped his fingers and melted my heart. The vocal performance didn’t seem to grab the coaches’ attention, but just as I’d started to lose hope, Shakira turned. YES.

Usher and Blake immediately regretted regretted not hitting their buttons. They realized what a catch (FISHING JOKE) he was when it was too late.

Clarissa volunteers at an after school music program for girls, so yeah, she was wonderful in my book before she even sang. Well guess what? She can sing. Holy hell. She did “Zombie” JUSTICE. Her voice is deep and strong and powerful and she knew exactly how to let the song build. She crushed it.

Shak, Adam, and Blake turned. Shak stood and air drummed along with the performance. Shak is the best. We should all be a little more like Shak. Usher turned his chair at the very end.

Melissa Jiménez—“If I Ain’t Got You”

Well, this woman is BEAUTIFUL. Like, stunningly beautiful. She began the song a cappella, and it was pretty strong. However, as it went along, it kind of lost steam. UH OH.

BUT THEN! She managed to pick things back up again during the second half of the song. WHEW. Even with the ebb and flow of energy, I thought it was very good. She has a lovely voice. Usher and Shak hit their buttons at the very end. WHEW, again.

Melissa wants to pursue an R&B career, so Team Usher it is!

Ohhhh, I hope this means we get a video message from Celine Dion, I thought. AND WE DID. Celine wished Sisaundra luck, which, OMG.

Sisaundra’s range is… WOW. Like, so undeniable. Shak turned, then Adam, and then Blake. Usher waffled throughout the entire song, and then hit his button at the very last note.

All four coaches fought for her. Shakira told Sisaundra that choosing one of the guys would be the wrong pick. “I’m good with girls,” Shakira told her. “So am I, baby,” interjected Adam. OH, ADAM! You scoundrel.

So, who did she pick? Blake. She said that the way he looked at her and talked to her “felt like home.” Aw.

Tuesday night: Don't worry, the Blind Auditions will still be rocking and rolling and whatnot!