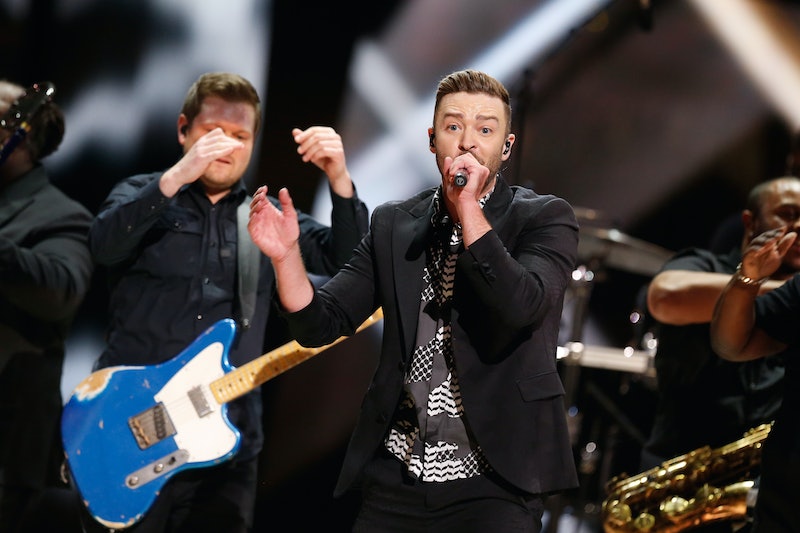 In news that's going to make you feel wizened, irrelevant, and ancient: your favorite song to rip up the high school dancefloor with, "Sexyback," is now ten years old. Entertainment Weekly celebrated this fact by interviewing the star about the track and — rather wonderfully for fans — we all got to find out about how Justin Timberlake made "Sexyback" so sexy. According to Timberlake, there was one key musician who was an overarching influence on the track: David Bowie.

According to the mixer on the track, Jimmy Douglass, the team behind "Sexyback" had a way of inspiring Timberlake to new creative heights. They liked to feed him "basic root idea[s]," such as a certain drumbeat, and then Timberlake would riff on the theme in his writing. So there was already a strong '70s influence in the drums on the track which may have led to Timberlake thinking about the man who he couldn't stop listening to back then, none other than The Thin White Duke (I'm serious, that was his nickname). I've got to admit — this news is a touch unexpected since Timberlake, while magnificent, delivers shots of pure pop pleasure while Bowie always aimed for something a touch more experimental, both in his music and his style. But after relistening to "Sexyback" and a few of my favorite Bowie tracks ("Watch That Man," "Young Americans," "Fashion," "Modern Love") I've reconsidered. I'm not being fair — both of them are geniuses at giving us a stuck-in-your-head-for-centuries catchy pop melody. Timberlake explained:

"I was listening to a lot of [David] Bowie at that time—Ziggy Stardust and Diamond Dogs—and I played 'Rebel Rebel' over and over again, like, 15 times the day before I wrote anything for 'SexyBack.'"

But Bowie wasn't the only influence on the track. Timberlake referenced other retro bands he was also interested in channeling:

"We were interested in taking those new-wave synth sounds that were made popular by bands like Tears for Fears and the Human League and seeing how much R&B we could add to that sound. We wanted to take those synth sounds and make them arpeggiated, almost like what’s very common with EDM now."

I'm a Tears for Fears fan, and while I respect Timberlake's worship of 1980s Brit-synth I can't totally hear the influence on "Sexyback." Tears for Fears was so dependent on huge, swooping swathes of reverb and I don't hear it in the choppy stylings of "Sexyback." But again, much like Bowie, both Tears for Fears' work and "Sexyback" is in earworm territory.

Timberlake seems genuinely unable to pen anything but hits (when was the last time you heard an un-catchy JT song?), so it's encouraging to know that he, like the rest of us mere mortals, takes inspiration from rock gods of the past.

More like this
Twitter Has *A Lot* To Say About Justin Timberlake’s Beat Ya Feet Dance
By Sam Ramsden
Selena Gomez Explained Why A Past Album Cover Made Her Feel “Really Ashamed”
By Grace Wehniainen
Drake’s Net Worth Will Have Critics Saying “Honestly, Nevermind”
By Hugh McIntyre
Are Quality Time & Words Of Affirmation Love Languages Compatible?
By Lexi Inks
Get Even More From Bustle — Sign Up For The Newsletter