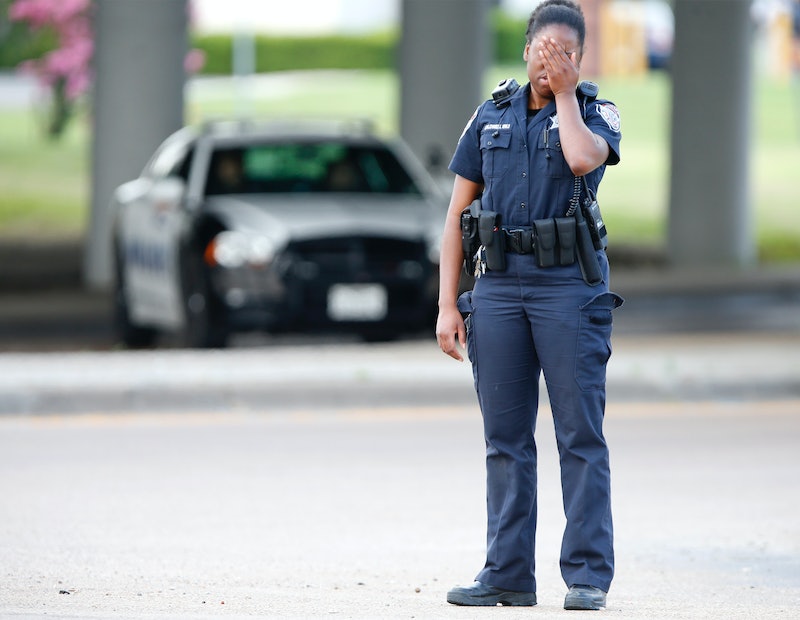 After what's being described as the worst attack for police officers since 9/11, many are scrambling to help the Dallas police victims, especially by donating money. Here's what happened: On Thursday evening, a sniper, from an elevated location, waged a fatal attack on Dallas police officers who were overseeing peaceful protests. So far, we know that five officers have been killed and seven more are injured, with those numbers potentially rising. The suspect, admitting guilt, has since been killed by a robot bomb.

On Friday morning, President Obama addressed the nation after the tragedy, saying he is "horrified" by the "vicious, calculated, despicable attack on law enforcement." Many share this sentiment and are looking for ways to pitch in. But how? Well, there are some suggestions here about ways to help the community at large, but there are also ways to send money directly to those in need.

As Bustle's Celia Darrough mentions in that article, there will likely be a GoFundMe campaign for the victims' families, but, like Dallas Chief of Police David Brown said Friday in a press conference, most of the victims' families want to maintain their privacy for now. So while we wait, there are still other ways to help the force and the families of those who have fallen. Mark Cuban sent $1 million to the Dallas Police Department (DPD) to pay for about 16,000 hours of overtime.

For those of us who don't have that kind of cash, here are some other ways to send money, and every penny counts.

According to a tweet from The Dallas Police Association, one way to send money to the DPD is through the site Assist The Officer Foundation (ATO), where they've set up a page for you to donate. ATO is a foundation for fallen officers, so when you get to the donations page, make sure you fill out the a comments section and designate that you intend the funds to go to the Dallas Police Department.

Another spot is, Guns and Hoses. It's a nonprofit organization that helps families of fallen officers specifically in North Texas. There are two ways to send this organization money. The first is on their donate page where there's the option to contribute electronically to their PayPal account. They also accept cash the old fashioned way; if you want to send a donation by mail, the best address is:

Other organizations dedicated to accepting donations for those who have been impacted by police officers who have perished in the line of duty include Concerns of Police Survivors (COPS), Officer Down Memorial Page, Law Enforcement United, and National Law Enforcement Officers Memorial Fund.

As in former fatal tragedies, blood donations are crucial. If you are local, you can donate blood — check out this list of places to donate blood in Texas compiled by the local CBS affiliate. Coincidentally, only two days before the shooting, the American Red Cross issued an emergency request for blood donations as they were afraid of running out and not being able to meet local hospitals' needs, so now it's even more important.

In any event, if you are looking for charities on your own, make sure to be careful of "fake charities"; you can use charitynavigator.org to double check you're not sending money to something bogus.