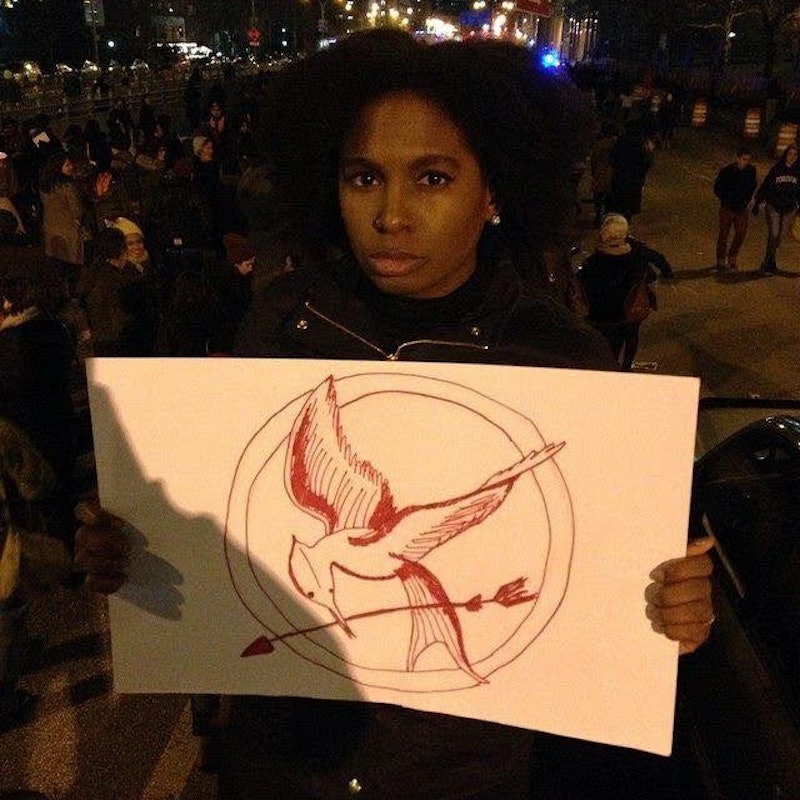 The continued and sustained killings of black people by police terrify me for a number of reasons — the first and foremost of which, of course, is fear for the people I know — my brother, my father, and my friends. But I’m also scared for those I don’t know. And I am scared for myself.

There are already so many names we shouldn’t know: Akai Gurley, Michael Brown, Aiyana Stanley-Jones, Anthony Hill, Anthony Robinson, Sandra Bland — and, most recently, Alton Sterling and Philando Castile. There are so many who came before them, and there will be far more who come after, killed by police, and by a culture that vilifies and devalues black life.

It’s never been more clear to me: When you’re black, it doesn’t matter if your name is biblical or stereotypically black, it doesn’t matter how you speak, your college admissions status, the way you dress, or the good you’ve done in the world. If only one person implies you’re belligerent, scary, large, or dangerous, that reputation will stick. And your murder, regardless of how unnecessary it was, will be justified.

Rape culture says that victims were "asking" to be raped if they wore short skirts. The media says that black people were asking to be murdered if we wore hoodies.

As a black woman, it is both interesting and horrific how much the victim blaming of murdered black people parallels the victim blaming of female rape victims. Some rhetoric surrounding the extrajudicial murder of black men, women, and children essentially says that if they had been more respectful, dressed better, or were less intimidating, they would not have been killed. This confused and awful belief is known as "respectability politics," and it takes many forms.

Rape culture says that victims were "asking" to be raped if they wore short skirts. The media says that black people were asking to be murdered if we wore hoodies. Alcohol is to blame for a victim being raped, but it excuses their rapist if they were also drinking. Black victims are expected to have superhuman self-control when screamed at with a gun in our faces, and mind-reading abilities to know whether a cop finds us particularly dangerous. The police who kill us can get by with the excuse of not being well-trained enough, or saying that they didn't know what our intentions were. Most rapes are not prosecuted, and rapists very often walk free. When police murder black people, officers often walk free or receive a slap on the wrist and keep their jobs — if they even face an indictment at all.

I feel my heart ache whenever I see the next black man, woman, sleeping baby, or playing child who is murdered on the news; when the videos play of their last moments, and when they are so often unarmed or complying as they are executed. I feel my blood burn when apathetic and ignorant people appear in the media, in a Facebook thread, or in real life to imply that these victims somehow deserved it, and that a systemic pattern of violence does not indicate a system of oppression. But mostly, I feel fear.

I wonder if in that moment of confrontation with the police I’d be able to hold it together. I wonder if I would be able to not fight back out of fear, and if people would say I was asking for my death if I did.

I’m scared that because my brother and father are big and tall like Michael Brown, they’ll be thought of automatically as a threat, and shot in the street. I fear that if my mother, my sister, or myself are pulled over in a routine traffic stop, we will be shot, or taken into custody before dying mysteriously. I’m worried that if my fear of the police one day leads me to run, I’ll get shot in the back like Walter Scott.

I wonder if people would believe the news or me if I told them that I, a peaceful protester, was tear-gassed, or beaten, or had rocks thrown at me by police while I was protesting police violence. I wonder if in that moment of confrontation with the police I’d be able to hold it together. I wonder if I would be able to not fight back out of fear, and if people would say I was asking for my death if I did.

I wonder a lot of things, but here's what I do know: America needs to end these modern-day lynchings before we can even talk about making ourselves great again.