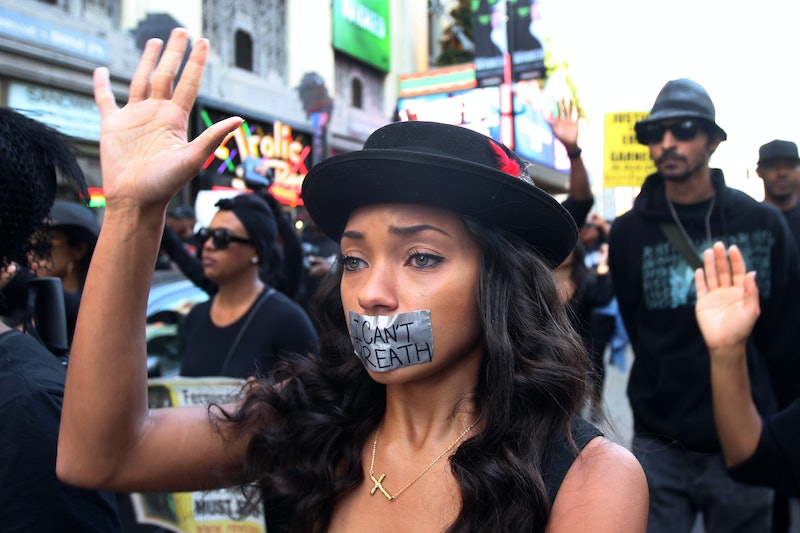 Protestors in New York flooded the streets last week, toting signs that blazed with images and phrases about cruel injustice. Just a week after similar events in Ferguson, a grand jury ruled that Daniel Pantaleo — the NYPD officer who put Eric Garner, a 44-year-old, black, Staten Island man, in a chokehold that led to Garner's death — should not be brought to trial for his actions. A failure to indict the police officer responsible for Garner's unjustifiable, illegal, and unnecessary death signifies why there’s been a breach of trust between communities of color and those tasked with enforcing the laws. In black American communities, we are holding our breath, waiting for whoever's next. There is no guarantee that the next victim will be a black male, but there appears to be a guarantee that the victim will be marginalized or forgotten by the mainstream media if she is a girl or woman of color.

The Malcolm X Grassroots Movement, a non-profit organization whose mission is to defend the human rights of black people, found that every 40 hours, a black man, woman, or child is killed by police, security guards, or self-appointed law enforcers. In fact, since the killing of Mike Brown, more than 14 black teens have been killed by the police, including 12-year-old Tamir Rice, a boy in Cleveland, Ohio who was murdered less than two seconds after police arrived at a playground to answer a 911 call related to a black child carrying a pellet gun. We know another Eric Garner is coming, and it is impossible to prepare for the onslaught of grief that will accompany the next traumatic injustice.

While we grieve with the families of Brown, Garner, and countless others, black women are tired of being placed at the fringes of the conversations about state-sanctioned violence. Justice can't only apply to black males.

While some news outlets covered these women's deaths, many chose to overlook them because they're women, and more specifically, black women. Their deaths seem to have little value. As writer Victoria Law explains in Bitch magazine, the names of unarmed black women killed by police "very rarely stick in public memory and never gain the same traction as Eric Garner or Michael Brown." Sexism impacts every aspect of black women's lives, including how we're treated, or not addressed, in media after our deaths. Yet our experiences with law enforcement are very similar to that of black men.

As a black woman, I'm not immune to the fear. My heart pounds rapidly every time I see blue-and-red lights flashing in my rearview mirror. I never know if I will be alive when I leave those brief encounters with police officers. One wrong move could cost me my life, and that is a fear that haunts me as I move through the world every day.

If the next victim of police violence is a black woman or girl, her name will probably not resonate as loudly as that of Mike Brown and Eric Garner. Her face won't adorn posters protesting the mistreatment of black women by police officers, because police violence is often coded as male, as Dr. Treva B. Lindsey of Ohio State University explains.

Prevailing narratives around Black violability and anti-Black racial violence pivot around Black men and boys. Both historically and contemporarily, when many people working towards racial justice around the issue of racial violence, the presumptive victim is a Black male. From lynching to police brutality, the presumed victim is a Black male. Therefore, Black women and girls are viewed as exceptional victims as opposed to perpetual victims of anti-Black racial violence. Our narratives around racial violence, unfortunately, have yet to evolve into ones that are gender inclusive. Black Victim=Black Male.

Female victims of color are marginalized, and always have been. Renowned social justice warrior and organizer Fannie Lou Hamer was savagely beaten by Mississippi police officers in 1963. She developed a blood clot in the eye, damaged kidneys, and a limp that would remain with her for the rest of her life as a result of the beating. Yet, the sexual and physical terrorism committed against Hamer isn't discussed as often as the repeated arrests of the Rev. Dr. Martin Luther King Jr or Malcolm X.

Even now, police violence inflicted upon women of color — like Boyd and Jones, who were both unarmed when they were fatally shot by police officers — doesn't dominate headlines the way the killings of Garner and Brown do. No concrete data has been collected on the number of black women who are killed by law enforcement, and that's no coincidence; most of the time, we barely know their names. While we grieve with the families of Brown, Garner, and countless others, black women are tired of being placed at the fringes of the conversations about state-sanctioned violence. Justice can't only apply to black males.

Social justice leaders are organizing and meeting with Congressional and international leaders to push toward laws that will insure that people of color are safe to stand in front of convenience stores without being choked to death. But as we wait for those laws to be seen as necessary, and we wait for police officers to wear body cameras, and we wait for a shift in how police officers are trained, we also wait for female victims of color to receive equal acknowledgement.

Native New Yorkers, like me, know how brutal the New York Police Department is. We’ve lived through Sean Bell, Amadou Diallo, Kimani Gray, and the countless others who’ve lost their lives at the hands of those designated to protect and serve us. Eric Garner is the newest member of that lineage of men of color who are killed by the New York Police Department, and whose families have to watch their loved ones receive minimal justice. All black women request is that our deaths matter too.