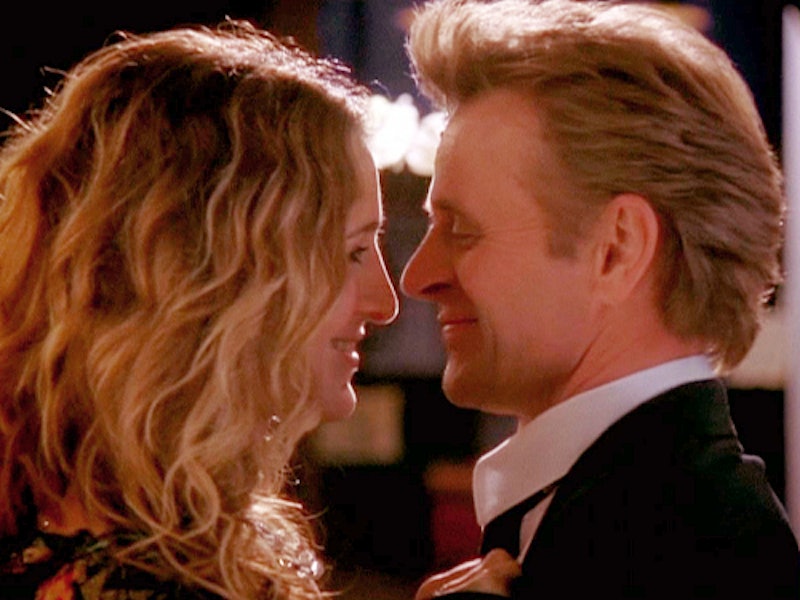 Can we all take a moment to reconsider just how profoundly, vomit-inducingly terrible Carrie Bradshaw's dating life often was? As much as Sex and the City is fondly remembered as showcasing the glamorous, martini-sipping, Manolo-wearing side of New York City single life, this whole approach seems to gloss over the tons of toxic guys Carrie Bradshaw dated. Men with commitment issues, men who were too clingy, men who misread the situation and paid her for sex, men who cheated on their wives with her and — lest we forget — men who were flat out physically abusive.

Nope, beyond Carrie's sweet designer wardrobe and suspicious real-estate setup for a freelance writer, Sex And The City didn't position itself in the realm of fantasy, so much as in a kitchen sink drama with regards to the choice of men Carrie got. The one miracle of the show to me was that Carrie actually continued dating, despite her boatloads of traumatic experiences. So it's a long list but a worthwhile one: let's sort through the most toxic of the toxic bachelors she dated. Who knows, maybe you'll even take home a valuable lesson in who not to give your number to at that party tonight.

When Carrie and Keith met in LA, she was bowled over when he took her with him to view a property worth $3.2 million. But it turns out Keith's whole shtick about being a Hollywood agent turns out to be a lie. He's just Carrie Fisher's house sitter. Lesson: attractive, youthful millionaires are a rare breed. If you meet one, assume he's a poverty-stricken nobody, just like you.

Applying the word "toxic" to affable chiller Sam might be an exaggeration. But dating twenty-something Sam became a trial thanks to the leaning-tower-of-Pisa washing up situation and lack of toilet paper at his house. If you're over the age of eleven, a decent toilet roll supply is just a given, no? Lesson: don't date humans who don't respect themselves enough to keep their living spaces liveable.

Patrick Casey seemed like he had it all — style, looks and an impressive skill for one-liners (“How many cute, smart, single smokers are there left in the world?”). But sadly he was a recovering alcoholic who ended up replacing his addiction to alcohol with an addiction to sex — with Carrie. Lesson: dating attractive people with addiction problems isn't a great idea in the first few years post their recovery. They're going to need to focus on themselves, not on someone else, or they could end up falling back into the same addictive patterns that were so painful in the first place.

Handsome French architect Giles woos Carrie, seduces her, and then pays her. When Carrie wakes up to find cash on her nightstand, she realizes he's assumed she's a high-class escort. No judgement on sex workers, but when you're just trying to date someone, that's got to be a kick in the teeth. Lesson: honestly? I'm not sure there's a lesson to be drawn from this one. Just plain old bad luck.

Jeremy's Carrie's old high school boyfriend and everything's going great until she discovers he's an outpatient at a local mental health facility. Lesson: do copious Facebook stalking before reuniting with an ex you haven't seen in a few decades.

This was actually Theroux's second hot-potential love interest role in the show, so I'm guessing the writers adored him. He appeared in Season 1 as a writer who is Stanford's pal and one of "New York's 30 Under 30" and flirts with Carrie. Then he came back for a second helping as short-story writer Vaughn Wysel, a fiction writer with a high enough profile to appear in GQ. Sadly, his erectile dysfunction issues and lack of interest in addressing them ensured their ending. Lesson: problems in bed are fine as long as your other half is able to discuss them. Otherwise, no matter how good your emotional connection, how long can it last?

A guy with his own comic-book store and an amazingly located, plush apartment? Too good to be true, right? Wade lived with his parents and spent all his income on really great pot rather than contributing to his parents' costs/saving up for a place of his own. Peter Pan-ing with him for a while was fun, but ultimately Carrie realizes she's an adult who needs to date other adults. Lesson: partners who take advantage of their parents' generosity sucks, millennial economic crisis or no.

So cute. So funny. Also a whimsical writer, just like Carrie. But he broke up with her ON A POST-IT NOTE #neverforget Lesson: If you've got far enough in with someone to have slept with them and they break things off in a way that shows no respect, never look back.

When Carrie wanted a quick rebound hook-up post breaking up with Big, she went for the wrong guy. Not only was it "jack rabbit" sex (Carrie's words, not mine) he slut-shamed her in public at a wedding the next day. Not. Cool. Lesson: choose rebounds carefully. You never know when they're going to come back to haunt you.

How could Mr Big have been Carrie's one-and-only, her happily ever after? He was the absolute worst. He was shady about commitment, he only got truly interested in Carrie when she was unavailable, he cheated on his wife with her. So much ick. Lesson: don't date variations on Mr Big.

A famous Russian artist played by an even more famous (in real life) dancer. It feels like the showrunners really set us up on this one: he was artistic, he was romantic, he was grandiose in his gestures. But! When Carrie wants to address their issues, he tries to shrug her off ("Not now, it was a stressful day"). When she reaches for his shoulder as he heads to the shower, he becomes physically abusive. Lesson: if someone displays abusive behaviour, get out of there immediately, no excuses. You're done.

Poor Carrie. The wealth of terrible dudes she dated made NYC look like the absolute worst to date in. However, her loss is our gain — learn from Carrie's horrific dating history and swerve the real life versions of the same.