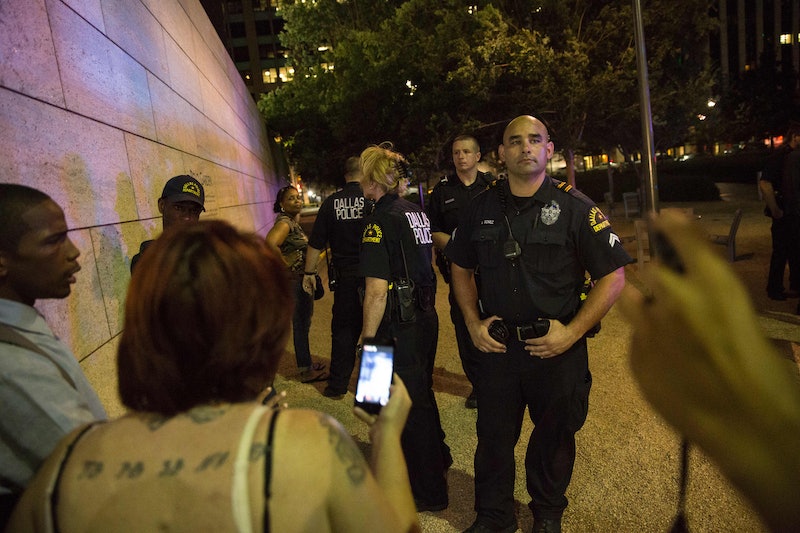 On Thursday evening, an anti-police brutality protest in Dallas turned tragic and deadly when a gunman fatally shot five police officers, and injured seven others along with two civilians. It is now being called the single deadliest assault on law enforcement since the Sept. 11, 2001 terrorist attacks. The Dallas attack was, as President Barack Obama said Friday, "vicious, calculated and despicable." It added to what had been an already highly difficult week, as videos of the deaths of Philando Castile and Alton Sterling, two men shot by police in Minnesota and Louisiana, respectively, had been circulating on the internet and social media.

But in a poorly timed tweet posted this Friday morning, Gov. Nathan Deal of Georgia shared a statement describing the protest as "anti-police." The tweet, which read, "Today, we mourn the lives of five law enforcement officers who were gunned down during an anti-police protest in Dallas last night," would have been appreciated and welcomed had the governor refrained from labeling and diminishing an anti-police brutality march as "anti-police."

Instead, such divisive rhetoric only stoked tensions and pain from Thursday's horrific attack, which was an unmistakable tragedy. But the horrible violence at the Dallas protest should not be used as a tool to de-legitimize the fact that racial profiling and police brutality are real and threatening problems that must be addressed.

Many took to Twitter to express anger after the governor's tweet and to point out why it potentially added antagonism to the tragedy.

A few hours after his initial post, Deal released a series of other tweets in an attempt to clarify what his initial post had meant, saying that "the anti-police incident to which I referred was the shooting of law enforcement officers."

He then said it was not in reference to those who were "peacefully demonstrating."

And further added this message of condolence to all who "suffered loss of a loved one this week."

The Georgia governor wasn't the only politician to face backlash for a social media post. Former Illinois Congressman and talk show host Joe Walsh posted a series of tweets that were widely seen as racist and threatening in regards to the Dallas protest. Walsh tweeted that "this is now war," referred to Black Lives Matter activists as "punks," and told President Barack Obama "to watch out." Walsh later tweeted that he wasn't "calling for violence"and told the Chicago Tribune that his tweets were in response to his view that "there's a war against our cops in this country, and I think Obama has fed that war and Black Lives Matter has fed that war." The tweets were later taken down, which Walsh said was done by Twitter after he said he received a message that his account was going to be suspended by the site. Twitter told the Chicago Tribune it would not specifically comment on Walsh's situation, but noted that there is a standing rule that posts that incite violence are prohibited and may cause a "temporary locking and/or permanent suspension of account(s)."

Tweets like Deal's will not help to advance a national conversation on reform and the de-escalation of violence in this country. It is important to recognize that we do have a serious problem concerning racial profiling and aggressive policing, while also making clear that fighting violence with more violence, is definitely not the answer. Instead, messages and Tweets like the ones shared by the Dallas Police Department, thanking the community for showing support "during this difficult time" are the type of cathartic words we need to be hearing right now.

In this time of healing, words of consolation, change, and solidarity are the messages needed to move forward.