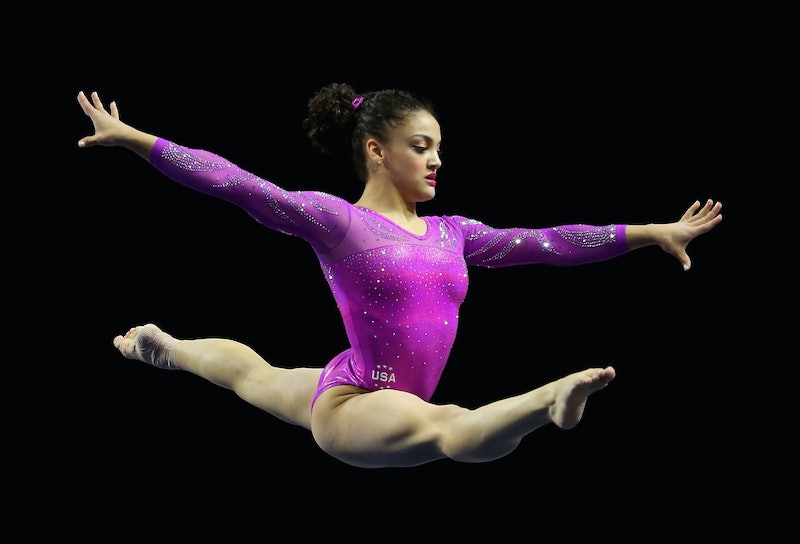 The 2016 Summer Olympics in Rio are fast approaching, and there's one up-and-coming gymnast to watch out for who is favored to qualify at the trials in San Jose, California, this weekend: Laurie Hernandez could become the second Latina gymnast on the U.S. Olympic team in 30 years. And the New Jersey native is also pretty incredible.

Although she's only 16 years old, Laurie Hernandez is already making waves in the gymnastics world. Last year, she won the U.S. Junior all-around title; this year, her first competing in senior competitions, she placed third overall in the U.S. Nationals in St. Louis, Missouri, in June, beating Olympic gold medalist Gabby Douglas, who placed fourth. And at the Olympic trials this weekend, she's expected to qualify for one of the five spots on the women's U.S. Olympic team — quite an accomplishment for someone who is barely old enough for a driver's license.

So what is it like to be 16 and competing against some of the biggest names in gymnastics for a spot on the Olympic team? At a recent press event in San Jose which Bustle attended, Hernandez said that it feels "crazy," but that she's still excited. "I remember, like, sitting on the couch with my mom as we were watching all these girls [at the 2012 Olympics], and now that I'm here and I'm competing with them, it's great, it's a really great experience."

Hernandez has been doing gymnastics since the age of 5, and quickly showed a talent for the sport. She attended her first national development camp at 9 years old. And now at 16, she's absolutely amazing to watch.

If Hernandez qualifies, she'll be the second Latina gymnast to represent the United States since 1984, when Tracee Talavera was a member of the silver medal-winning women's team. Annia Hatch, who was born in Cuba, became the first after Talavera when she competed in 2004. Hernandez said she hopes she can help inspire more girls like herself.

"I just want to make sure that all the little girls, and everyone out there, don't limit themselves. Just because you're Puerto Rican, black, whatever you are, I don't want you to limit yourself and think that because I'm this, I can't do this. No, no, no, no, it doesn't matter. It doesn't matter who you are. If you want something, go get it."

Her advice to other Latina gymnasts? "Don't have a closed mind. If you want to pursue something, then pursue it and just do it. Don't let anybody tell you otherwise."

When asked about body positivity, she was just as inspiring. "I have a big build and I love it," she told reporters in San Jose. "I think that it shows that I'm strong."

Hernandez will be competing in the Olympic gymnastics trials this weekend in San Jose. And whether or not she qualifies, she's clearly an athlete to watch out for in the coming years.