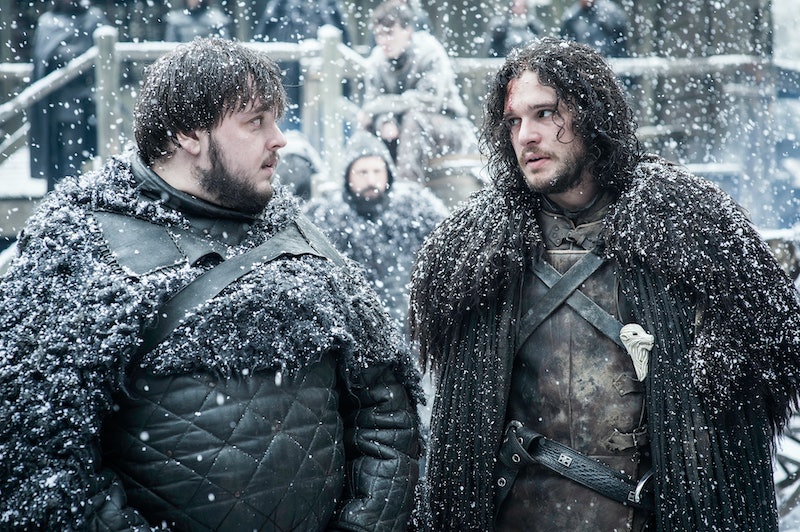 When it comes to Game of Thrones, it's always best to expect the unexpected. But, I'm sure even the savviest viewer likely never imagined the gyroscope in the opening credits would appear in the Citadel during the Season 6 finale. And now, the reveal of the gyroscope hanging in the library has sparked a surprising theory: One that questions whether Samwell Tarly is narrating Game of Thrones . After all, he is the character who first sees the gyroscope, the only primary character who has been to the Citadel, and he is a lover of history, books, and learning. It would make sense.

In an interview with The Hollywood Reporter, John Bradley, who plays Sam on the series, theorized, "One theory is that what we're seeing now and how we're experiencing Game of Thrones is Sam telling the story of Game of Thrones. If you take the logic of the story now, the story of Westeros and the story of the battle for the Iron Throne, it would be a book in that library." Sam could definitely be the writer of that book, and I could see this theory being true — but, if it is, what does that mean for the show? As with any story that is told through a narrator, it would be impossible not to wonder how reliable of a narrator Sam would be. Would it mean we were possibly hearing the story told to us with his bias?

If the viewer is experiencing the world of Game of Thrones during the battle of the Iron Throne through the eyes of an older Sam, then Sam's experiences and relationships to the characters in the present and the future would naturally color how he portrays them. Jon could be endlessly courageous because this is how Sam sees him, while Cersei's descent into a power hungry queen could be overstated. The idea that Sam could be the character deciding what is important enough for the history books shines a new light on everything that has been revealed so far.

As the chronicler of history, Sam's job would be to weave a compelling story just as much as it would be to convey the bare bone facts of the War of the Five Kings and everything that came after. Since Jon is his friend, the Starks inevitably are the heroes of the story, and if Sam is telling the story from a future where Dany and Jon unite the Seven Kingdoms, Dany's role as an almost godlike savior makes more sense. In Sam's eyes, even though he lived through many of the events, he would be spinning a song, or story, for future generations.

Those who are responsible for saving the Seven Kingdoms would be the ones who get all the glory, while those that stood in the way of progress would be seen in a much more villainous light. Sam is a voracious reader, and he understands what makes a good tale work. If his ultimate job is to chronicle the events of the past then he would add the necessary flourishes because he is a natural born storyteller.

Compared to other Game of Thrones theories, Sam as the narrator is pretty tame. Even if it comes to pass, its only major impact on the story would be confirmation that Sam makes it to the end. That would be an enormous relief, but not an event that changes the course of the series. The idea of Sam as the chronicler of history is more interesting if you are concerned with authorial license, though. The very fabric of Game of Thrones could be spun by one character's view of events, and that is both a fascinating idea, and one that could change how viewers see the characters. Is the version of Game of Thrones fans are witnessing just the version Sam sees? If that is the case, then the final scene of the series could feature one epic reveal that adds a whole new layer of awesome to the unassuming Samwell Tarly, and a good decade of academic debate about his role as the narrator.