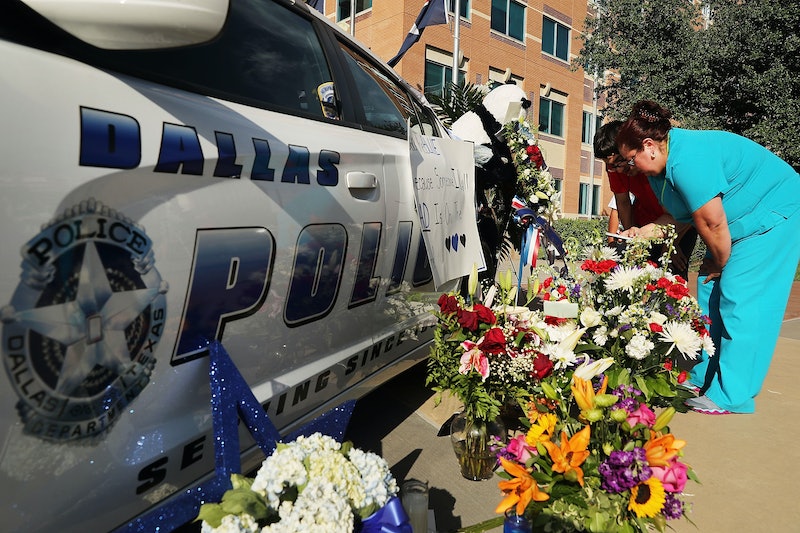 The week has been difficult for many Americans. First, police fatally shot two black men on Tuesday and Wednesday. Then, on Thursday, a sniper gunned down 12 Dallas law enforcement officers, killing four police officers and one Dallas Area Rapid Transit officer. How to respond, how to mourn, how to continue the protest — these are all questions swirling in many heads this week. But there's one front page you need to read in light of these senseless killings. The Virginian-Pilot published an editorial on its cover Saturday, asking that we stop, take stock of who we are as a people, and decide once and for all that enough is enough.

The paper asks us to stop screaming, whether it's about the huge number of guns on American streets, the actions of racist police, or about "the fear that pervades too many neighborhoods and communities this day and every day." So read this broadsheet and listen up. The editorial board is not asking for an end to movements working against these problems — Black Lives Matter protests continue across the country, and they should. What they want is a moment of reflection: "Let’s just stop and mourn and wonder how in the world America became this unspeakably, relentlessly terrorized place."

The editorial board wants us to evaluate how we got to be a nation so terrorized. How black men live in constant fear of being stopped by the police, where "police officers are scared of the skies during a protest in a major American city," where gay men in a club and kindergartners in a classroom are equally unsafe. This is how The Virginian-Pilot sees the United States now:

Whether we recognize it or not, that is who we are now. We are a nation at war. With ourselves. Daily. Constantly.

Our divisions are myriad. The common thread remains the lethality of the weapons used, whether with a sniper’s precision or with a spree killer’s mania or with a mother’s ruptured sanity.

We grope for answers and find them in Islamic extremism or racism or mental instability or parental neglect or. Or.

Or, simply, this is who we are now. A nation mourning again. Questioning again. Finding no answers again. Coming together again to mourn our dead. Again.

But we won't stay united for long, the paper argues, blaming "ambitious" politicians and "tribal politics." They will cut short this moment of national mourning and deny us the political will we need to prevent future gun violence and police brutality — unless we change to show "we are better than this," unless we come together to acknowledge the victims in Dallas, the 137 black men and women killed by police this year, the LGBTQ revelers at Pulse's Latin Night, and the nine black parishioners killed in the Charleston church.

Once again in their words:

We are a United States soaked in the blood of our divisions. Those divisions will most certainly grow deeper. But we are better than this.

We’ve created and abetted this society, allowed it to be overseen by leaders incapable of inspiring the unity of purpose necessary to end this war among us, leaders who divide us with reckless rhetoric and self-forgiving prayers. People shouting at each other about whose fault it is.

So now they call on us to look at ourselves because "we have to be better than this." The paper presents the response to this week and to these deep-rooted problems facing the United States as a choice:

We can be the America of constant bloodshed. Of greedy and incompetent politicians. Of tireless division and vituperation.

Or we can be something better. Something glorious. Something united, for a change.

So be the change. Stand united. Protest, call your senators and U.S. representatives. Call your state representative, your state senator. Call your local politicians, the mayor, the county sheriff, your area's elected prosecutor. Reach out, make those connections, and work with your fellow citizens of all backgrounds, races, and beliefs to help end terror in America.