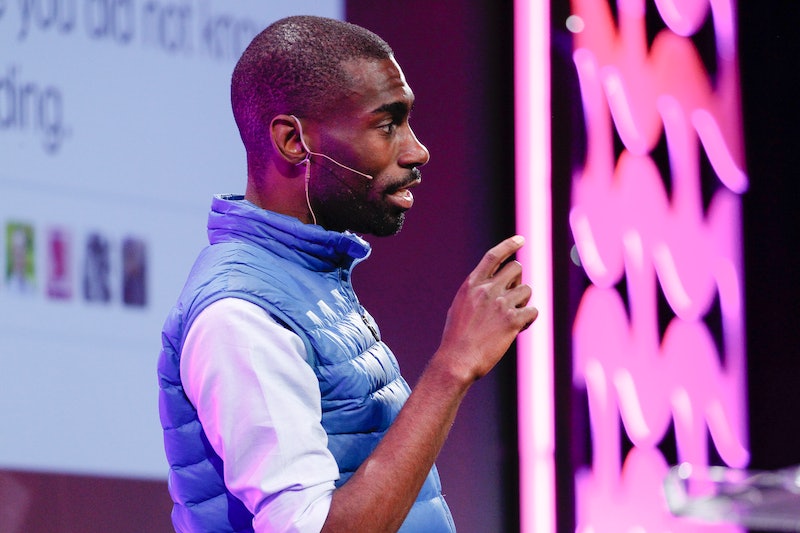 Prominent Black Lives Matter activist DeRay McKesson was arrested Saturday night in Baton Rouge during a protest against the officer-involved death of Alton Sterling last week. McKesson was walking with other protestors along the side of a major highway in the city when police arrested him and charged him with obstruction of a highway, which carries a maximum penalty of a $200 fine and six months in prison. According to East Baton Rouge Sheriff public information officer Casey Hicks, McKesson was one of over 100 people arrested during the peaceful protesting. #FreeDeRay quickly shot up to the number one trending topic on Twitter as social media users rushed to express their outrage and shock at McKesson's arrest, including actress Rashida Jones.

McKesson was live streaming the protest via Periscope as he was arrested, seemingly from behind without any warning from the officer beforehand. In the video, McKesson's phone appears to drop to the ground as he is arrested, and is then picked up by a woman. "DeRay just got arrested from behind. They ran up on him," said the woman who picked up the phone. According to Washington Post reporter Wesley Lowery, McKesson sent a text confirming that he was in a holding cell with 33 other people, but it is unclear how he sent the text since the phone he was using stayed behind with the protestors when he was arrested.

McKesson has been a high profile voice in the Black Lives Matter movement since the 2014 uprisings in St. Louis sparked by the death of 18-year-old Michael Brown. McKesson quit his job as an educator in the Minneapolis school system to follow the growing movement against police brutality. He, along with other prominent activist Brittany Packnett, Johnetta Elzie, and Samuel Sinyangwe, launched Campaign Zero, a national public policy platform to eliminate police violence.

According to their social media, Packnett and Elzie were with McKesson when he was arrested, and are now leading the charge to get him freed from police custody. Packnett tweeted a link to a bail fund for those who were arrested during the protests, which has already generated over $5000. Activists are also asking the public to call the Baton Rouge Police Department to demand the release of all the demonstrators.

It's unclear if the protests will continue on Sunday, but for now, the fight seems concentrated on social media as activists build awareness of McKesson's status. The wave of protests and civil actions can only be expected to be galvanized after McKesson's high profile arrest, so it's possible that the coming week could be an especially turbulent one across the country.