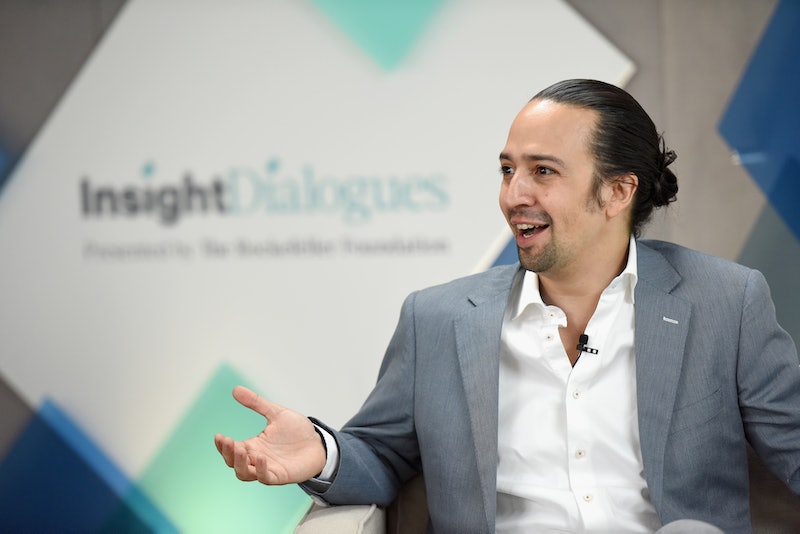 Lin-Manuel Miranda is known first and foremost for his on-point man bun — or I guess more accurately, for his songwriting, acting, and singing voice, but the man bun is seriously up there in the rankings. Or should I say was? It looks like Miranda has finally cut his Hamilton hair, according to an image he posted on his Twitter account, so the man-bun will be out of the picture at least until his luscious locks grow back. The cut took place on Saturday July 9, minutes after Miranda's final performance in Hamilton, the musical he wrote and starred in as the title role, Alexander Hamilton.

The haircut — and the end of his time in the musical — marks a huge milestone for Miranda. When Hamilton was just a speck in his eye back in May 2009, Miranda performed its predecessor, the hip hop album The Hamilton Mixtape, for President Obama and family at the White House Evening of Poetry, Music, and the Spoken Word, and he did that while sporting a buzzcut. When the mixtape turned into a full-on musical, Miranda grew his hair out to play the role of Alexander Hamilton. But alas, times are changing, and now Javier Munoz is taking on the role of Hamilton, so Miranda announced he'd cut his locks off with a tweet right after the show. The caption was all too fitting: "Teach 'em how to say goodbye."

Cut to Miranda at his goodbye party, where he rocked his fresh new 'do while wearing a shirt as tribute to the recently passed and iconic Muhammad Ali. Of course, fans of Miranda already have created a hashtag to remember this momentous occasion, #hamilcut.

But don't take the haircut as a sign that Miranda is not gonna be in the spotlight anymore. There are plenty of opportunities to see Miranda reppin' his #hamilcut. The artist wrote the score for the new Disney movie Moana and will also be starring alongside Emily Blunt in the Mary Poppins reboot. You can look forward to seeing that 'do at awards shows, interviews, and whatever other endeavors the multi-talented go-getter finds himself in. And years from now, when your grandchildren are gathered around you, you can say, "I remember the day Lin-Manuel Miranda got his #hamilcut. And what a glorious day 'twas.

More like this
John Mulaney & Olivia Munn's Relationship Timeline Features The Comedian's First Father's Day
By Jordyn Tilchen
'Stranger Things' Star Joe Keery Ditches The Upside-Down With New Single "Change"
By Radhika Menon
Taylor Swift's “Carolina” Theme For 'Where The Crawdads Sing' Soundtrack Is Here
By Jake Viswanath
What Is Elvis Presley’s Net Worth? How The King Earned & Spent His Fortune
By Grace Wehniainen
Get Even More From Bustle — Sign Up For The Newsletter