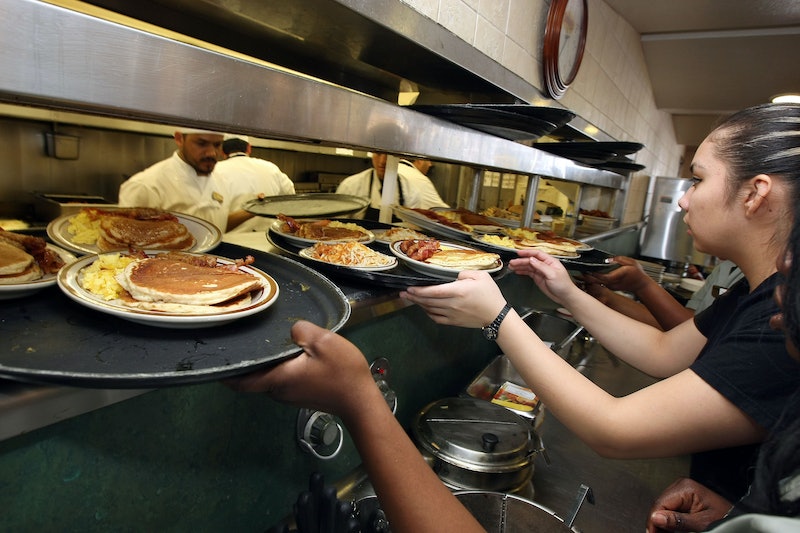 The old saying "nothing good happens after 2 a.m." can certainly apply as much to late-night drunken munchies as it can to late-night drunken hookups. A college kid's drunk food usually takes the shape of mediocre pizza, soggy cheese fries, or sad mounds of nachos, but we suck it up and eat it anyway because it's all that's available after the bars close. But, if you search REALLY hard, you may find that off-campus diamond-in-the-rough restaurant that is open late AND has food that's not just edible, but damn delicious (or is that just the booze talking?).

We've combed through review after review to make your late-night search for something to eat just a little bit easier. So if you're in one of these college towns for a late night, skip the generic fast-food and weird-looking chicken nuggets and head to one of these spots instead. You'll thank us tomorrow morning.

Grease Trucks are a beloved institution on Rutgers’ campus, but the most famous of the bunch is the RU Hungry truck. Its claim to fame is the “fat sandwich,” loaded with every drunk food you can possibly think of. RU Hungry even has its own food challenge that the host of Man vs. Food couldn’t conquer. Bonus: They deliver! But don’t expect the whole truck to roll up to your door…

Affectionately known as a “Gut Box”, this combo from Guthrie’s is “legit the best thing ever” according to one of our writers, and FSU/Florida A&M students in general.

The best cure for any alcohol binge is good Mexican food. El Rancho is a hot-spot for University of Missouri students who apparently need words bigger than “love” to describe their feelings towards their nachos.

This Philly staple and tourist attraction is located within biking distance of the University of Pennsylvania. The debate over which cheesesteak is better, Pat’s or Geno’s, will continue, but myself and the people of Yelp agree that Pat’s is, indeed, the king.

Fan Favorite: Wiz Wit (Pat’s has its own language that is IMPOSSIBLE for rookies to understand. Thank god they give you a cheat sheet.)

Wings Over is a chain, yes, but that doesn’t mean they can’t have great late-night food. UConn students swear by their boneless wings after a night out.

This diner is also hip and is known to have a mean breakfast that is available ALL DAY. This is what drunken dreams are made of for students of George Washington University, Georgetown, and Howard University.

Fan favorite: Anything off the breakfast menu

For UCLA students who crave a sweeter late-night snack, Diddy Riese is the place to go. With customizable cookie and ice cream sandwiches at only $1.75 and cookies for just $0. 35, the line is always out the door.

Fan favorite: Cookie and ice-cream sandwiches in the flavors of your choice

Open until 1 a.m. on Friday and Saturday, midnight Sunday - Thursday.

Boston isn’t known for its late-night options, but this diner is open ‘round the clock. South Street Diner has become a sanctuary for college students from Suffolk, Emerson, and Tufts after a night out in Boston.

Vegetarians rejoice! This late night spot promises made-to-order tortillas and organic ingredients, giving even the healthiest of eaters plenty of options. Even the soberest of Duke and UNC patrons will be pleased with these burritos.

This Ohio State favorite is known for its giant pizza slices and slut sauce (a secret recipe they sell by the bottle). With toppings such as “spicy-ass pepperoni”, Mikey’s has the sense of humor necessary to entertain even the rowdiest of after-hours crowds.

Chano’s is perfect when craving any Mexican dish loaded with cheese. Their carne asada is legendary amongst USC students, and they even have a drive-thru for the rare non-drunk customer.

Collegetown Bagels offers an extensive menu ranging in options from breakfast to dessert, and it even serves beer and wine to the Cornell and Ithaca College students that frequent the spot. Seriously, this sounds too good to be true.

Fan Favorite: According to Yelp, basically everything.

Raising Cane’s was born in Baton Rouge, so it’s no surprise that LSU students are obsessed. It’s primarily a chicken finger restaurant, so if that’s what you’re craving after your Friday frat party, this is the place for you. When I visited LSU I wasn’t even given the option to eat here because my friend told me I HAD to have this chicken, and it didn’t disappoint.

This little diner has great food in a cool, very Austin-like atmosphere that’s beloved by University of Texas students. Breakfast and Mexican are the specialties, which is weird but hey, it’s Texas.

Fan Favorite: Kerbey Queso — it’s so good, songs have been written about it

Located amongst the bars of High Street, this sandwich shop has been serving Miami of Ohio students since 1975. They serve up over 90 different varieties of steamed bagel sandwiches and subs (one of which used to come with a single cigarette), and you can nominate your own creative combo, too.

Open until "the bar rush comes to a halt."

What is better at 4 a.m. than a giant pile of Mexican food? The answer is nothing, and ASU students agree. This place is ultra cheap and day and night.

Fan Favorite: Chile relleno burrito, which one Yelp commenter describes as "a breaded and fried chile stuffed with cheese and drowned in guacamole and pico de gallo, wrapped in a warm, soft tortilla that tastes fresh off the stone." Yes, please.