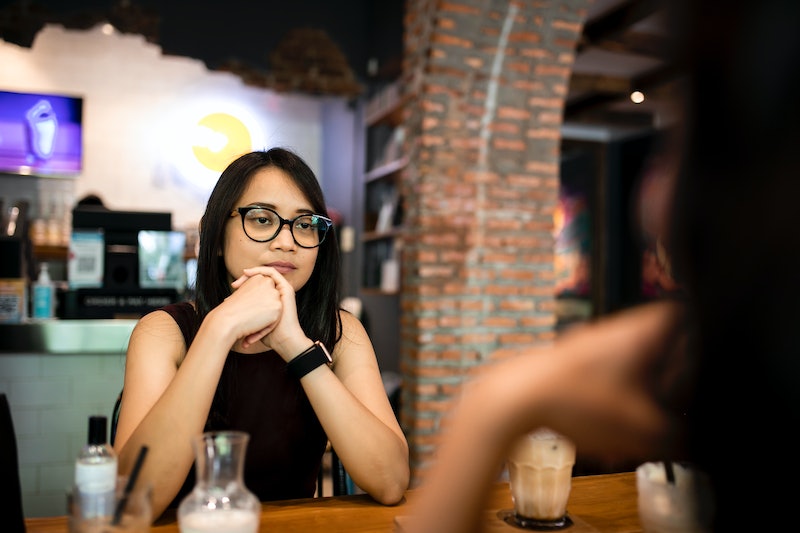 A lot of the time, the phrase "healthy communication" sounds like a collection of buzzwords that don't actually mean anything. It does boil down to a fairly simple definition, though: whether you and your partner can't seem to resolve one issue (taking out the garbage, say), seem unable to have decent arguments about anything, or just don't seem to talk meaningfully about anything any more, your ability to communicate needs a health check, pretty quickly. Communication is a bit more nuanced than just talking and hearing what the other person says, though those are the basic building blocks. It means getting your point across clearly, respecting the other person, understanding and validating their perspective, and working together in a constructive way. That can be much trickier than it looks, but there are a bunch of tips and tricks available to communicate and argue more effectively in your relationship.

One of the best guides to obstacles to communication comes, weirdly enough, from the Department of Health & Human Services. They outline a huge set of possible problems when it comes to discussing things effectively, from filtering what you hear to cultural differences, being distracted, interrupting, and trying to "score points" rather than reach a resolution. Eliminating communication sins is definitely a part of the process of improvement, but introducing positive behaviors is a key bit of the picture too, which is where these eight tips come in.

If you seem, in any context, not to be talking to your partner effectively any more, here are some proactive strategies to try. Whether you involve your partner in attempting to make things better is up to you, but it's probably going to be more successful if you're doing it as a combined effort.

If you just don't seem to be getting along with your partner, or are for all intents and purposes talking in different languages, it can be helpful to familiarize yourself with the psychological differences between various types of communicators, and to know where you and your partner stand.

Counseling Psychology outlines three problematic communication types: the blaming, the explosive, and the silent — all of which can have serious impacts on healthy communication in a relationship. They're all modeled on a person's instinctive reactions to conflict, and that matters; a style that sets off immediately at the first sign of conflict will stand in the way of getting anything done at all. Knowing our own argumentative instincts can be really unhelpful when it comes to resolving problems.

2. Clarify Your Definitions At The Beginning Of A Discussion

Counsellor Mel Schwartz writes for Psychology Today that communication difficulties can arise from definitional clashes. If you're not using the same definitions and meanings for words in your verbal clashes, you may very well be unintentionally talking past one another; Schwartz gives the example of the word "intimacy," but anything from "fighting" to "aggression" to "living together" can be interpreted differently. If you're capable, it's a good idea to climb down from an automatic "WHAT!" reaction (as in, that flare of emotional anger or defensiveness) and figure out whether you're on the same page. Even if you know each other really well, definitional crossover can still happen.

Attachment styles, or the models of safety and security given to us from a very young age by our parents and carried throughout our lives, are often very reliable models for how we communicate, particularly in relationships with people we love. And if the attachment wasn't completely secure, we likely take out that insecurity on our partners. If we have insecure or anxious attachment styles, our communication is likely to be worried and reassurance-seeking; if we're dismissive and avoidant, we'll likely shut down and not discuss things at all.

Psych Alive has a really good rundown of the different styles of attachment and how they can mess up communication; if you recognize yourself or your partner in anything, do some research on how to communicate well with particular attachment styles, and how types can relate to one another. (Psychology Today's got good resources on this as well.)

Some partners can become communicative brick walls, or try to get out of the situation as best they can, because they've become overwhelmed by their emotional response to the conversation at hand. Dr. Alice Boyes, who wrote the Anxiety Toolkit, has a very good explanation for why and how this happens. "Psychological flooding," she writes, "is one of the biggest things that gets in the way of couples having healthy compromise discussions. When people reach a certain level of emotional arousal they can’t process information or communicate effectively... If a person has had lots of past experiences of becoming psychologically flooded in interpersonal discussions, they may get flooded in response to what seems like a very small trigger."

If you have a partner who seems to get "flooded" when you're trying to sort out an issue together, it's important to recognize that, and to understand that nothing's going to get done when they're feeling completely underwater. Work around that tendency by noting how their flooding happens and giving them time out if you notice them beginning to get overwhelmed, discussing how to argue in a way that doesn't upset them, and avoiding triggering it as much as possible.

5. Remember To Validate Their Feelings

There are a bunch of communication strategies in relationships that can cause serious issues — stonewalling, contempt, talking all in "you" language and immediately giving in are all poor communication ideas. But there's one interesting one that sometimes gets left out of discussions about improving how you talk to one another, and it seems pretty crucial: validating the feelings of the other person.

Psychology Today defines invalidation of feelings as "when we recognize emotions, positive or negative, coming out of a person, and either discount, belittle, minimize, ignore or negatively judge these feelings." If somebody is crying, don't get annoyed that they're crying; if they're feeling positive, don't jump on that feeling as ridiculous. People gotta feel what they feel. Just saying things like "I hear you," "I see how you're feeling," or "I understand" can be validations of emotions.

Even if things suck (which they sometimes will) or seem impossible (which they also will), that's no reason to stop treating each other with respect. Communication will improve if you don't succumb to the temptation to be cruel or bitter, even if it seems like the most satisfying thing to do at the time. It's also better for your relationship's longevity in general.

"Couples that use destructive behavior during arguments — such as yelling, resorting to personal criticisms or withdrawing from the discussion — are more likely to break up than are couples that fight constructively," the American Psychological Association points out. Wild disagreements don't mean stopping treating your partner like a person and listening to what they actually think and feel. If you're angry and feel yourself being tempted to be cruel, step back or ask for a time out, so that you can get into a position where you're more respectful or can joke about it.

7. Educate Yourself On Nonverbal Cues

If you find yourself unable to "read" the emotions or cues of your partner, it may be time to start observing their nonverbal signals and trying to understand what they indicate. Psych Central has an entire list of nonverbal signs in a partner that indicate various states of mind, from the tone of their voice to their physical distance and whether they're gesticulating; they may not be aware of what they're doing, but it'll pay dividends if you do. You should also pay attention to what you're doing, as you may not realize that you're sending off signals of distress or anger, but your partner might, and will react to them accordingly. Know what your bodies are saying.

Improving communication isn't all about how you choose to talk to one another; it's also about what you choose to talk about. And evidence strongly suggests (as does logic) that avoiding discussing anything negative, from anger to discontent to resentment, will result in festering and a lack of resolution. Activating what Psychology Today calls an "on pause" period before you get to the nitty-gritty of an issue will not lead to a solution; after all, a fight about not doing the dishes is never just about the dishes. It's always about deeper problems like commitment, respect, and security, and delaying indefinitely isn't going to help. You can do your utmost to make sure you're both comfortable and in the right frame of mind for an in-depth discussion (that's part of being kind to one another), but it needs to happen. Then go get chocolate mousse together afterwards.

If you're conflict avoidant, it's a really good idea to talk about stuff before you get to the point of explosion; making regular check-ins where you can discuss issues before they snowball is a good way to stop anybody from freaking out or getting upset.