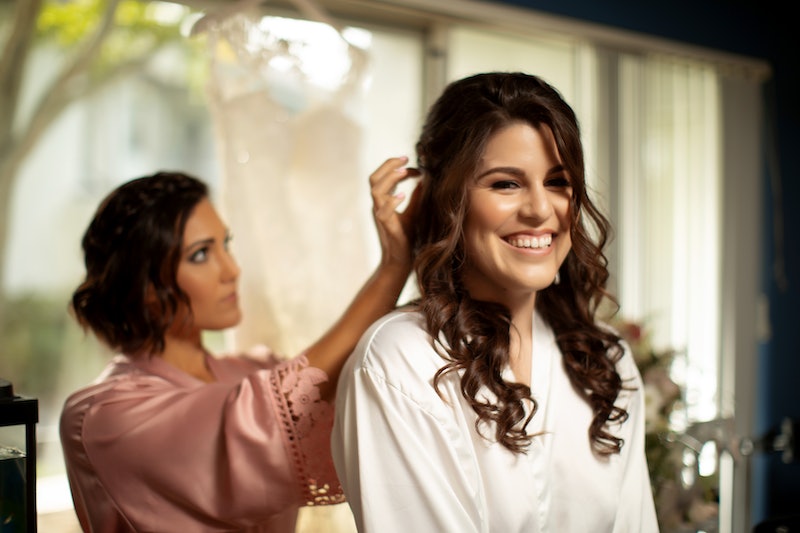 Given that summer is prime wedding season, odds are you've had someone's wedding on the brain recently, whether it's your own or that of someone close to you. In the midst of all those mental images of white dresses and flowers, you might also be wondering about some of the wedding conventions we now consider "traditional" — like, for instance, bridesmaids. Why do brides have bridesmaids, anyway? If it's "traditional," where did the tradition come from? What does it mean? It's often worth examining the origins of cultural cues that have become standard over time; knowing the history behind them can sometimes make it easier to decide whether to keep a tradition or to forego it. So if you've been wondering whether you really need an army of bridesmaids — or even just one bridesmaid — here's where the whole idea came from in the first place.

As our concept of relationships have changed over time, so have wedding traditions; yet having bridesmaids and groomsmen (or bridesmen and groomswomen, or simply wedding attendants, or whichever terms you prefer) is one of those ones that just keeps seeming to stick around. In the modern wedding, of course, there are duties that attendants are supposed to carry out — but beyond helping to throw the bridal shower and/or bachelorette party, what's the story behind their popularity? Interestingly, it appears that they go pretty far back into history, with multiple possible explanations for what the tradition of bridesmaids stems from.

For example, when people got married in Ancient Roman times, a wedding needed 10 witnesses to be considered legally binding; this is thought to have been sort of a proto-wedding party. Furthermore, the bridesmaids allhad to dress just like the bride in order to confuse vengeful spirit presences who might try to harm or sabotage the newlyweds. Nothing says "Congratulations!" like acting as a decoy for evil things attempting to possess your bestie on her wedding day.

Another slightly less out-there aspect of the history of bridesmaids actually stems from the Bible: When Jacob married both Leah and Rachel, each woman brought her own "maid" (as in, "bridesmaid"), though they functioned more as literal "maids" than buddies who help you pick out flowers and pose in pictures.

It wasn't until the Victorian era that things started to get a little closer to the role of contemporary bridesmaids. During that time, bridesmaids made party favors, organized flowers, and accompanied the bride in her walk down the aisle. There's still a connection to the older traditions, too, though: During the Victorian period, bridesmaids walked down the aisle carrying herbs, grains, and garlic to scare away evil spirits. This is purely conjecture, but I suspect that this might be why bridesmaids still carry bouquets today. Better than garlic, right?

Nowadays, people have bridesmaids for all sorts of reasons. For some people, it's a way to incorporate close relatives into your ceremony. For others, it's about making your friends part of your special day. Others, still, are attracted to the idea of bridesmaids for cultural or religious reasons. And some choose to forgo bridesmaids all together. No matter what your reason, your wedding is your day, so whatever you and your partner decide is best for you is the way to go. There's no right or wrong way to plan your wedding, as long as it's the way you're most comfortable with — traditional or not.