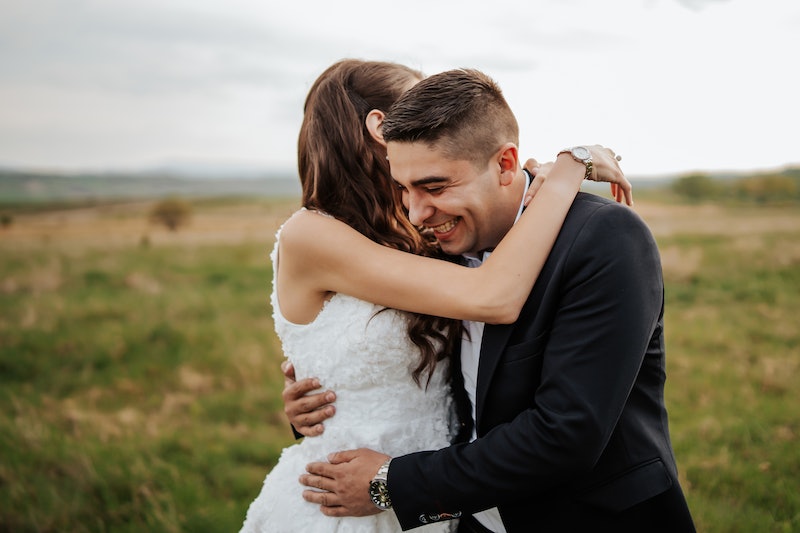 As winter comes to an end and spring approaches, we all know what's coming up: Wedding season. For some of us, this means we have a few months of dragging ourselves to spectacular and/or ridiculous venues and watching our second cousin marry someone we maybe met years ago at a family BBQ in store for us. For others, it's time to focus on our own nuptials, or time to spend long hours on the phone with a friend helping them pick colors for their table cloths. No matter what your stakes are, though, I think it's important to think about what wedding traditions reinforce gender inequality. If you're planning your big day, this is admittedly not the best exciting topic, but when you're making a huge commitment and planning a (possibly very expensive) celebration, I think it's valuable to sit down and research the traditions you may incorporate into your marriage.

When it comes to traditions, it can feel tough and awkward to talk to your family about going against the grain, especially when they might be directly involved in the traditions at hand (such as the father "giving away" the bride) — but, in my opinion, it's important to be open and honest if there are things in your wedding or marriage planning that you're simply not comfortable with, or want an outside perspective on. That said, if certain traditions jive with you and your partner, don't feel pressured to disavow them to be a "good" or "the right kind of" feminist, because feminism is all about embracing yourself and what you want, not what others want for you.

That said, here are some of the wedding traditions I think are most rooted in — and perpetuate — gender inequality:

Personally, I think people should have the choice whether to change their last names or not. Traditionally, the bride taking the groom's last name does reek of patriarchal culture; for inheritance reasons, children from the marriage needed to have their father's last name to claim things like an estate, savings, etc. Before paternity testing existed, the last name was also the way courts established paternity between fathers and children. In contemporary times, I know people take their partner's last name for all sorts of reasons, but traditionally speaking, taking on the groom's last name is rooted in sexism. It sends the message that a woman's name is less worthy and valid than a man's.

2. The Father Giving Away The Bride

I know this one is a sweet spot for a lot of people, and I think if you choose to have a male figure give you away at your wedding, you should savor those moments. For me, however, I think it's important to keep in mind that this tradition — sweet as it may seem — is rooted heavily in institutionalized sexism. The tradition of the father giving away the bride harkens back to weddings as transactions, where the father is literally "giving away" his daughter to another man, who takes over financial responsibility of her. It's also rooted in the notion that until marriage, daughters essentially "belong" to their fathers and not themselves. In the modern day, some people choose to ask both parents to give them away at the alter, while others choose to have only their mothers — or choose not to be "given away" at all.

3. The Bride's Family Paying For The Wedding

The tradition of the bride's family paying for the wedding goes back to the notion of a dowry. Dowries were basically goods or money the bride's family brought to the table when she got married, therein "earning" her position as a wife. This tradition also relies on the notion that women wouldn't be bringing in income during the marriage itself, so the dowry was meant to help support the couple when the bride joined her new husband's home.

In modern weddings, some couples still follow the tradition of having the bride's family pay for the wedding, while other couples split the cost between their families, or pay for their weddings out of pocket themselves. Regardless to who pays what, I think when it comes to weddings, equality is the most important thing: Whether it's your family who writes the check or not, it's important that everyone's voice is heard equally and that you (and your partner) are comfortable and happy with what is happening on your big day.

Ah, yes. The long-time tradition of men proposing to women. With the legalization of same-sex marriage, this one is challenged more in the day-to-day now than ever before. For opposite sex couples, too, there is a rise in women proposing to men, though it's still not common across the board. The idea that women need to wait for men to propose to them is damaging because it supports the idea that men have all of the control in the relationship and what the future holds for the couple. It also sends the message that for a woman to propose to her boyfriend, she's be stripping him of his masculinity or "stepping on his toes" by expressing her love and desire for long-term commitment.

5. The Man Buying The Engagement Ring

This one hinges on the idea that when men propose, not only do they need a ring to offer their partner, but that it needs to be "impressive" — that is, expensive. Some traditions dictate that a man should spend a certain percentage of his salary on an engagement ring, a sexist idea that hurts men as well as women: For men, it sends the message that their value and ability to be a good husband is based on their income and not their overall being, and for women, it sends a message that they should value perceived financial security over compatibility and love. Traditionally, engagement rings were seen as purity markers for couples who were waiting until marriage to have sex, and the popularity of diamonds in the 1940s put a (literal) price tag on the pressure to remain sexually pure until the wedding night.

All in all, I think when it comes to your wedding, you need to do what feels right to you and your partner. If traditions speak to you and are something you want to incorporate into your wedding, you should do so. In my opinion, I think it's important and valuable to learn about the history of why we do things, so we can best decide for ourselves what approach we want to take on a situation, or whether or not we want to incorporate certain messages into our lives. In contemporary times, people have significantly more freedom when it comes to social issues, like weddings, so now is as good a time as ever to talk to your partner about traditions and what you're comfortable reflecting or reinforcing during your nuptials.

More like this
The Most Compatible Life Path Numbers, According To Numerologists
By Kristine Fellizar
The 3 Most Compatible Matches For Life Path 1s
By Kristine Fellizar
How To Fight For Reproductive Rights, Based On How Much Time You Have
By Courtney Young
15 Ways To Tell Someone Was Just Talking Behind Your Back
By Carolyn Steber
Get Even More From Bustle — Sign Up For The Newsletter