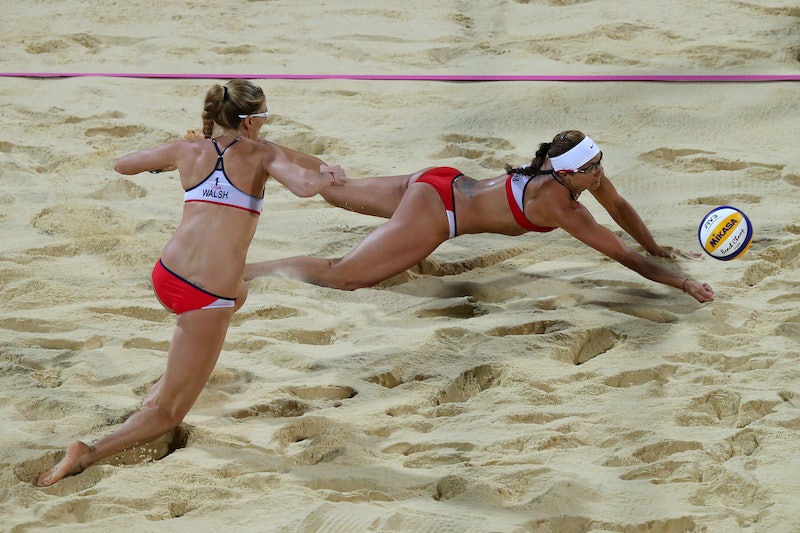 Of course, a bikini (for which the International Volleyball Federation (FIVB) allows "a maximum side width of seven centimeters (2.76 inches)") is not the most religiously or culturally sensitive uniform. So it's about time that another option has been added to the mix. As Huffington Post reported, as of the last summer Olympic games, beach volleyball players are now also allowed to wear shorts and a top. While the top can be sleeved or sleeveless, the shorts are limited to a maximum length of three centimeters (1.18 inches) above the knee. Although not every country or player has expressed concern with having to wear a bikini for the games, the modified rules were a long time coming for those with religious and/or cultural requirements that needed a uniform with more flexibility.

Of course, let's also not forget the women who might just not want to wear a bikini in order to participate in the Olympic games. After all, male beach volleyball players have always been allowed to wear shorts and tank tops, which has raised the question of whether female players are being exploited for their bodies. The Huffington Post quoted The Australian Sports Commission discussing the issue of "sexploitation" in sports, saying:

Women's beach volleyball, on the other hand, has introduced uniforms intentionally to focus on the athletes' bodies rather than for any technological, practical, or performance-enhancing reasons. Women must compete in bra-style tops and bikini bottoms that must not exceed six centimeters in width at the hip (men compete in shorts and singlets).

Hard to argue with that. After all, it shouldn't really matter what the beach volleyball players wear as long as all of the required information (number, country, sponsors, etc.) can be clearly seen. So it's a good thing the FIVB has taken steps to ensure the players are more comfortable in their uniforms. Lest we forget the sport is actually about the talents of badass, hard-hitting women — not what they look like.

More like this
The Nike & Jacquemus Collab May Have Been Inspired By Princess Diana
By Frances Stewart
9 Celebrity Couples With Matching Tattoos
By Jordan Murray
Yes, You Can Buy Off-White’s New Beauty Range In The UK
By Tomi Otekunrin
10 Show-Stopping Manicures From The 2022 BET Awards
By Paris Giles
Get Even More From Bustle — Sign Up For The Newsletter