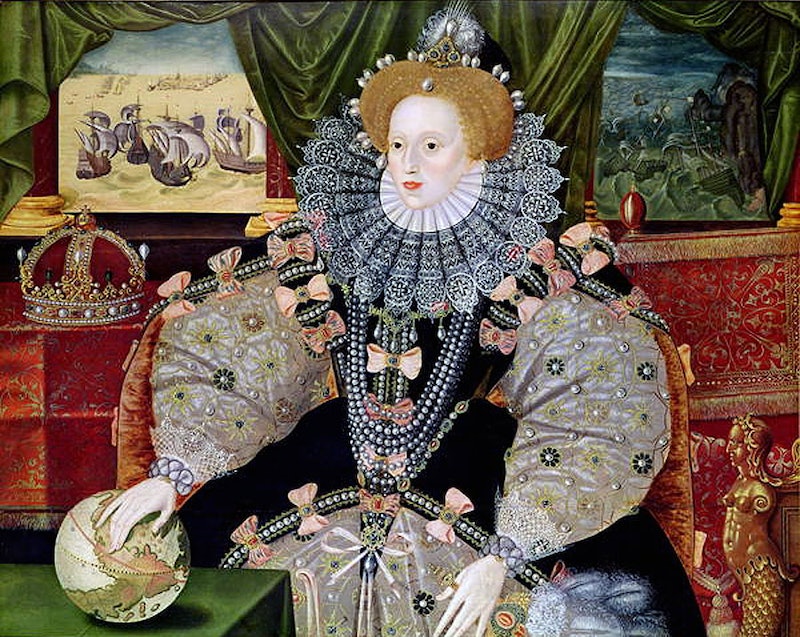 If you’re looking for a female mentor or inspiration in 2016, look no further than… your history books? That’s right. It’s the 21st century, but tomorrow’s (and today's) female leaders can learn a lot from the gutsy girls of yesteryear — women like Queen Elizabeth I, Eleanor Roosevelt, Maria Theresa of Austria, Amelia Earhart, Helen Keller, Joan of Arc, and more.

In my young adult series, Blood of Gods and Royals, I mix real-life historical figures with original characters to create a story about Alexander of Macedon with more magic, more drama, and, of course, more incredible women. The second book in the my series, Empire of Dust , is available now from HarlequinTeen, is the sequel to Legacy Of Dust, and it continues the adventures of Alexander, as well as the adventures of three incredible women — Katerina, Cynane, and Zofia — all of whom wield their own powers on their own separate journeys. The third installment in the series, Reign of Serpents, will be available in 2017.

As a historian and an author, I've studied many incredible, inspiring females in history. Here are 10 tips from historical heroines to help you find the inspiration to run the world in 2016 (and beyond):

Elizabeth, who became queen at 25, refused to marry in an age when women were seen as weak. Instead, she whooped the Spanish Armada, encouraged exploration of new lands, and became Shakespeare’s patron. England thrived during her 45-year reign — even though she was a woman ruling alone.

Catherine — intelligent and charming — navigated her way to rule the empire — alone — for 34 years. Under her rule, rebellion stopped, the economy prospered, and the arts flourished. Unlike other Russian rulers, kind-hearted Catherine didn’t whack off heads to show her power and was known for generosity to her enemies.

This first lady shocked the public — who thought she wasn’t acting at all ladylike — by speaking out strongly on issues of civil rights, women, and refugees. The more men tried to silence her, the louder she spoke. “No one can make you feel inferior,” she famously said, “without your consent.”

How on earth could a teenage peasant girl with no military training convince the king of France to let her lead his armies into battle? Joan so passionately believed that God had chosen her to vanquish English invaders, that she persuaded the king, the council, and thousands of soldiers! Joan pretty much single-handedly saved France from becoming an English possession.

At 23, Maria Theresa inherited a weak, corrupt Austro-Hungarian empire whose enemies immediately attacked her — because she was a woman. But on her own she figured out how to make her country strong and prosperous over her 40-year reign — even though she had 16 children and was deeply involved in raising them. In other words, moms rule.

Known as "the first lady of civil rights", Rosa Parks was a pioneer of racial equality in segregated Alabama. In 1955, she refused to give up her bus seat to a white passenger, was arrested, and lost her job as a seamstress. Rosa teaches us all to stand up — or in some cases, sit down — for what you believe in, no matter what the cost.

Amelia Earhart was an aviation pioneer, an author, and the first woman to ever fly solo across the Atlantic in 1932. Amelia continues to be an intrepid role model for girls who want non-traditional careers. “The most effective way to do it,” she said, “is to do it.”

Florence shocked her wealthy British family by announcing she didn’t want to marry; she wanted to become a nurse, then went off with the British army to the Crimean War. Her passion and tireless dedication made nursing a respectable profession for the first time ever.

Helen learned Braille and sign language, and became a famous speaker, author of 12 books, and an advocate for women’s rights and people with disabilities. “Optimism is the faith that leads to achievement,” she said. “Nothing can be done without hope and confidence.”

An inspiration to anyone who has ever read her diary, Anne taught us to find the beauty in the ugliest situations. “Despite everything, I believe that people are really good at heart,” she wrote.