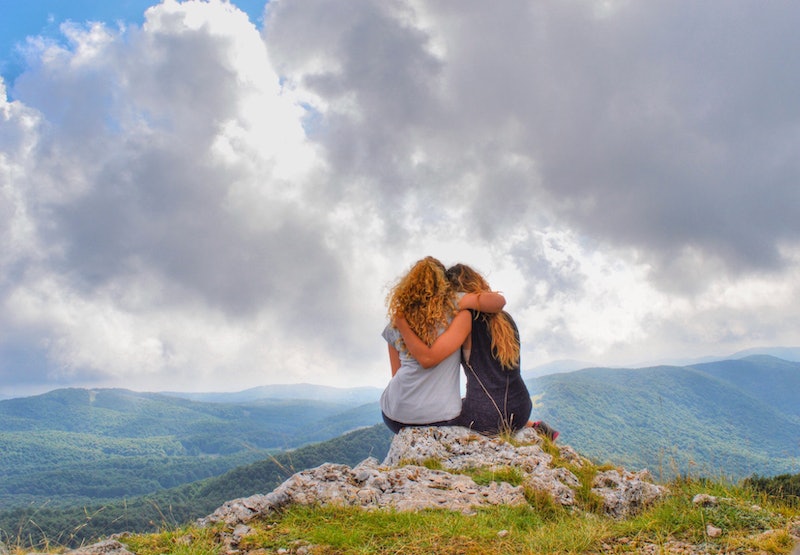 As Roxane Gay succinctly puts it in Bad Feminist: "Abandon the cultural myth that all female friendships must be bitchy, toxic or competitive." Then, once you rid yourself of the internalized misogyny and patriarchal conditioning that makes you doubt the power of platonic lady love, the opportunities for wonder twin feminist super powers truly activate. Although that may sound a bit hyperbolic, it's not too far from the truth. As us recovering "I'm only friends with dudes" girls can attest, a strong female friendship can often take you farther than any other relationship can.

This unique phenomenon is analyzed in a new book by Marilyn Yalom with Theresa Donovan Brown called The Social Sex: A History of Female Friendship. The authors look at the ways women's shared experiences of social and cultural oppression can forge bonds that lead to political, artistic, professional and personal success. According to a review in The New York Times, it was the intense friendship between Susan B. Anthony and Elizabeth Cady Stanton that "formed the foundation of the push for women’s suffrage," and there's nothing more feminist that that. So in the spirit of celebrating what your girlfriends can do for you (and vice versa), here are seven ways female friends can strengthen your feminism:

1. They Can Introduce You To New Feminist Ideas

No one emerges from the womb a fully-formed expert in feminism, which is why your friends are there to provide a safe space where you can meaningfully discuss sensitive subjects like sexual assault, body positivity, and yes, "white feminism."

2. They Can Introduce You To new Feminist Thinkers

Judith Butler, bell hooks, Roxane Gay, and Germaine Greer are just a few of the feminist thinkers I was referred to by my female friends and mentors. We can't all spend our days in gender studies classes, so personal recommendations reign supreme.

3. They Won't Slut-Shame You

When your female friends support your sexual decision making and don't shame you for your choices, it's easy to learn by example and extend the same courtesy to the rest of your social circle.

By the same token, if you're not slut-shaming, you shouldn't be prude-shaming. Supporting your friends who may be asexual or who may not be having the kind of sex you're having means being aware of the variety of lived experiences around you — which, in the end, makes you better able to understand intersectional feminism.

It's crucial to have someone there to give you a reality check if you start calling yourself (or someone else) "fat" as an insult, or to ground you and offer help if you're veering into disordered eating territory or hitting the gym only out of self-loathing.

6. They'll Accompany You To Feminist Events/Rallies/Protests

Whether it's a protest in support of Planned Parenthood, a lecture by a leading feminist scholar, or a class on maximizing your orgasmic potential, we all need a female friend we can throw down with IRL.

7. They'll Get You Amped Up To Fight For Your Cause

You may personally experience sexism, sexual harassment, sexual assault, or catcalling, but sometimes it takes hearing about a close friend's experience to act on your anger and frustration. Your female friends are your closest feminist allies — after all, it's for them as much as yourself that you're fighting for gender equality.