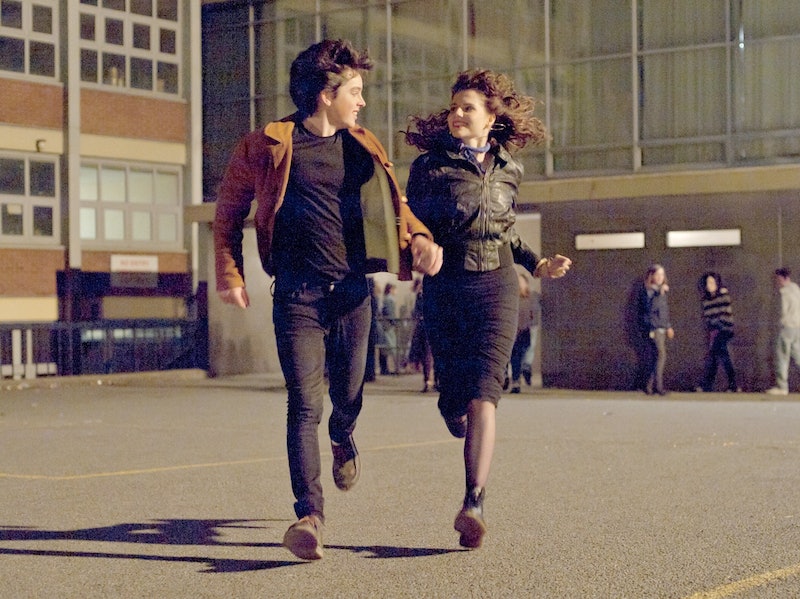 In 2007, A.V. Club film critic Nathan Rabin used a phrase to describe Kirsten Dunst's character in the Cameron Crowe movie Elizabethtown that finally gave audiences a vocabulary to discuss the deluge of aloof female love objects who are just quirky enough to catch the interest of the male hero, damaged enough to keep it, and vacuous enough to be there solely for him to learn something...about himself: the manic pixie dream girl. The term took on a life of its own, being applied both to modern sprites like Zooey Deschanel's character in 500 Days Of Summer and older versions like Audrey Hepburn's Holly Golightly. But in the '80s-set coming-of-age musical Sing Street , which hit theaters in April and is available on iTunes now, Lucy Boynton does not play a Manic Pixie Dream Girl. Don't let the era-appropriate big hair and neon eye make-up confuse you, nor the fact that her character Raphina is the whole reason teenage Conor (Ferdia Walsh-Peelo) rallies friends and strangers to start a pop band. "A lot of characters are the muse but are not afforded the depth that Raphina is," Boynton tells Bustle.

Sing Street takes place in a working-class area of Dublin, where Conor's family's money troubles dictate his move to a rough-and-tumble public school. Conor's older brother Jack educates him in the ways of music videos and New Wave. When Conor spots the mysterious and sophisticated Raphina hanging out on the steps of a boarding house, he decides to overlook his vast amounts of inexperience and announce to her that he has a band. He quickly scraps one together, and against all odds, they're good, especially with Raphina starring in their music videos. She is an alluring girl with a sad history whose very existence helps Conor become the truthful musician he wants to be, but the script and Boynton's controlled, deeply-felt portrayal handily help her sidestep "Manic Pixie" territory.

Conor and the rest of the boys owe Raphina a debt for their success, but her character development isn't sacrificed for theirs. "I think she really uses the idea of being a muse to her advantage," Boynton says. "She loves the idea of being a muse because of course she loves the attention and the adoration, but mainly because of the distance that brings between her and other people." As the story unfolds, more of Raphina's troubling backstory comes to light. "With the amount that she's been through in her life, she's taught herself a certain way to cope, which is to keep people at a certain proximity," Boynton explains. "[Being a muse] enables her to only allow people to see what she's projecting." Raphina even avoids calling Conor by his real name, pronouncing him "Cosmo," for the apparent sake of rock and roll.

Sing Street, which Boynton calls a "really cool and beautiful piece of art," is right in line with director John Carney's past features, Begin Again and Once, in that the director is always very interested in how people connect through art. And not just art that they make, but art that they love. The movie's position is that the songs that Conor and his friends write are better than they have any right to be, because Conor is so honest about his feelings. Yet unlike many a Manic Pixie Dream Girl, Raphina gets to keep some of her own revelations for herself. Boynton described how Raphina's well-constructed walls are broken down by a very unlikely friend. "Cosmo is the only first person to undermine [her distancing,]" she says, "because he is so young and so pure knows only to look for what's pure and real."

Boynton and her co-star Walsh-Peelo established their rapport during study sessions in Carney's office. "It was definitely, definitely a huge education," the 21-year-old says of her exposure to '80s musicians, movies, and culture. "It's kind of a behind-the-scenes history lesson." Still a Beatles and Bob Dylan devotee, Boynton even left the Sing Street with some new favorite artists. "I definitely wrapped the film a huge Talking Heads fan," she says, laughing. "My iTunes has vastly improved."

The shoot might have been a more stressful one if Boynton and her co-stars — many of whom were complete newcomers, including Walsh-Peelo — knew what roles they were playing, though. Carney told his cast that they were embodying amalgams of people he'd known in his youth, but Boynton only realized how autobiographical the script was when the whole team was out promoting its release. "I think [Carney] avoided telling us the extent of that in order to prevent there being any kind of pressure of meeting up to someone," Boynton says, particularly highlighting the weight it kept off of Walsh-Peelo's shoulders. "Imagine being told that you're playing a young version of the director!" she says. "I think it gave us a greater freedom at the time."

In 2017, Boynton will be turning in her acid wash and spandex for much more conservative attire. She's playing reclusive author J.D. Salinger's second wife Claire Douglas opposite Nicholas Hoult in the biopic Rebel In The Rye. And though Raphina and Claire both inspire men to make art, Claire's journey is much more depleting, Boynton explains, saying,"You see the beginning of the relationship where they're so in love and then right through the disintegration of that, which is really heartbreaking." Still, she's sure the heartbreak will be worth it for audiences. "The script is just phenomenal," she says.

With rising stars like Boynton so wisely and carefully choosing their projects, the "Manic Pixie Dream Girl" may soon be a stock character of the past.